Facebook India head Ajit Mohan has called the report false and inaccurate, in an internal conversation

Meanwhile, executive Ankhi Das has filed a criminal complaint against a journalist for WSJ report 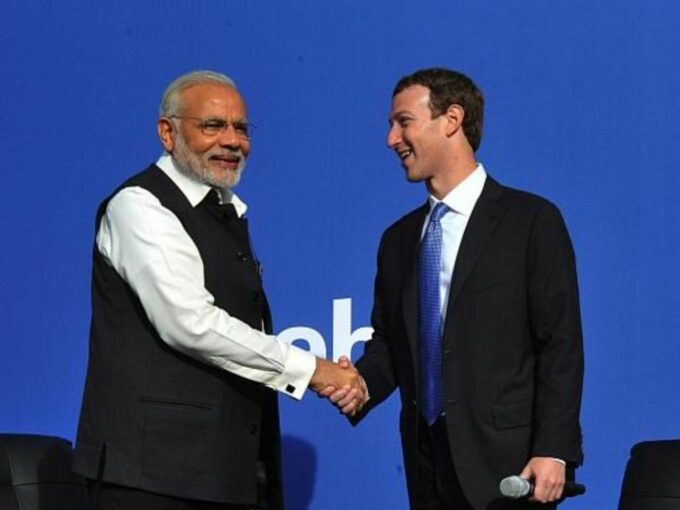 The world’s largest social media platform Facebook is currently battling a public-relations and political crisis in India after a Wall Street Journal (WSJ) report called out one of its top executives Ankhi Das, who is the public policy director of India, for not applying company’s hate-speech posts to BJP politicians in order to seek favors from the Indian government.

The company is facing criticism across the country, and to make matters worse, Facebook employees across the globe have been questioning the procedures and content regulation practices followed by the India team. Nearly 11 employees had also written an open letter to Facebook leadership asking them to denounce “anti-Muslim bigotry” posts made by BJP politicians that Das has previously protected. Reuters had accessed the internal email.

The letter also demanded that Facebook’s policy team in India and other regions should include diverse representation. The open letter read, “It is hard not to feel frustrated and saddened by the incidents reported … We know we’re not alone in this. Employees across the company are expressing similar sentiment…The Muslim community at Facebook would like to hear from Facebook leadership on our asks.”

The WSJ “article does not reflect the person I know or the extraordinarily complex issues we face everyday that benefits from Ankhi and the Public Policy team’s expertise,” Mohan wrote in an internal conversation, accessed by Reuters. But this is not the first time Facebook has been accused of having affiliation with a political party or protecting hate speech.

In June 2020, dozens of Facebook employees had staged a walkout in protest over the company’s decision not to take action against incendiary posts by the US President Donald Trump had made in the last week of May. These controversial posts included one which seemed to threaten violence against protestors by saying, “when the looting starts, the shooting starts.” Twitter determined that the same message violated its rules against the glorification of violence last week, limiting the ability to view, like, reply, and retweet the post on its platform.

Last year, India-based non-profit rights group Avaaz had revealed that Facebook was letting anti-Muslim hate speech spread unchecked across Assam, where the minority community were already being dogged by the National Registrar of India (NRC) issue. According to Avaaz, it reported 200 such cases of hate speech to Facebook. However, the social media company has removed less than half of them for breaching its community standards.

The report from the group further highlighted that these hate speech abuses often label Bengali Muslims as criminals, rapists, terrorists, pigs and dogs.

While Facebook is busy clearing out its mess, executive Das has also decided to file a criminal case against an Indian journalist, Awesh Tiwari, for allegedly defaming her in a public Facebook post and making “sexually coloured remarks.” Interestingly, the post was merely a summary of the WSJ article. 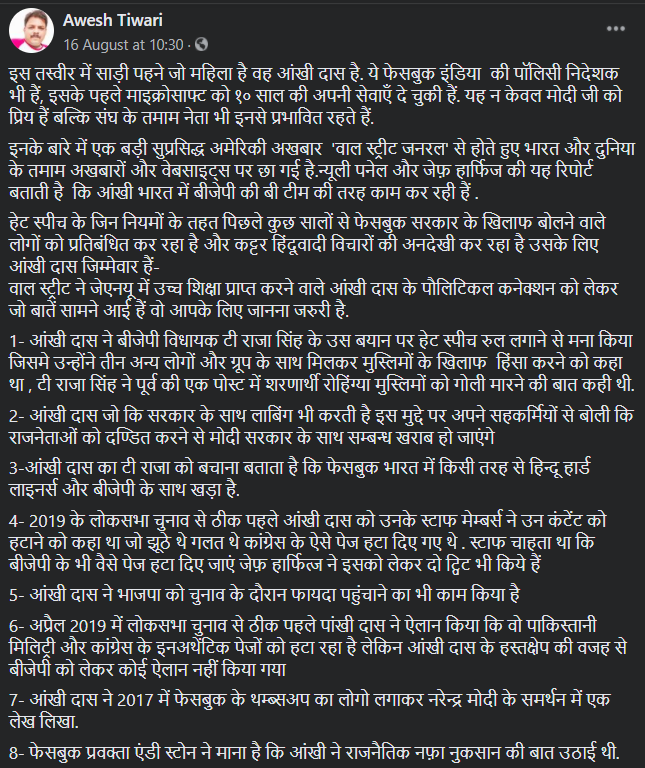 The WSJ report had noted that Raja Singh, a BJP politician from Telangana representing the Goshamahal constituency in Hyderabad, had put up a Facebook post that called Rohingya immigrants from Myanmar Muslim traitors and threatened to destroy mosques. Facebook took down the post, which was made in 2018, this Sunday (August 16, 2020).

Despite the post being in violation of Facebook’s hate speech rules and qualified as dangerous due to Singh’s off-platform activities, the company chose not to take any action against him till the report emerged. Das had allegedly prevented takedown of hate speech content posted by members of the ruling BJP, even if it conflicted with the organisation’s global guidelines on hate speech.

According to some existing and former Facebook employees, Das reportedly told staff members that punishing the violations by leaders from BJP would damage the company’s business prospects in the country. A Facebook spokesperson, Andy Stone, acknowledged that Das had raised concerns about the political fallout that would result from designating Singh a dangerous individual.

But Stone also mentioned that her opposition wasn’t the sole factor in the company’s decision to let Singh remain on the platform. The spokesperson said Facebook is still considering whether a ban is warranted.