Exclusive: Quikr Is Acquiring LaundryAnna To Ramp Up Its Laundry Play

Exclusive: Quikr Is Acquiring LaundryAnna To Ramp Up Its Laundry Play 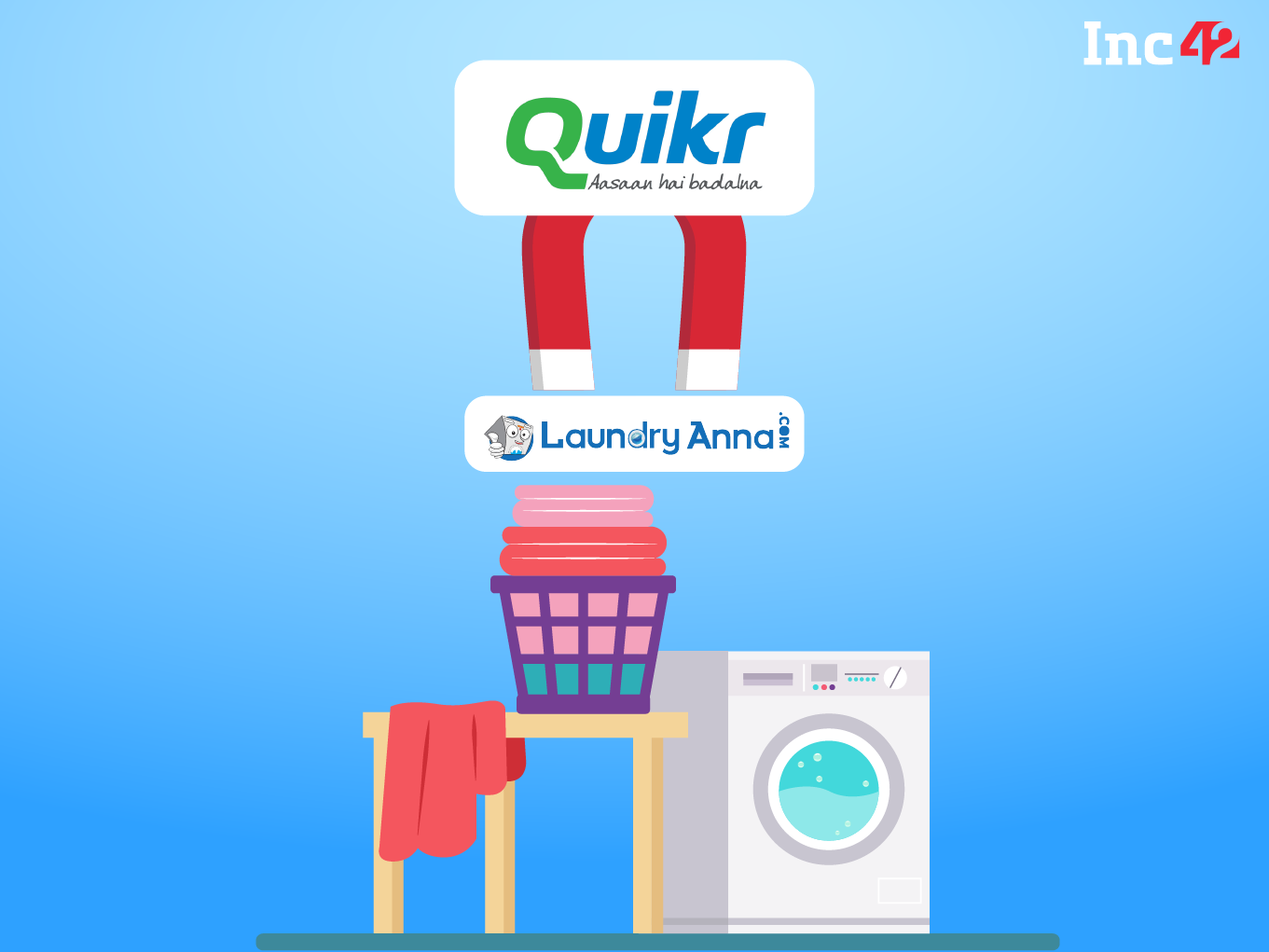 According to Inc42 sources, the deal is set to close in the next 10 days

Online classifieds marketplace Quikr is acquiring Bengaluru-based online laundry services startup LaundryAnna, and a deal between the two will be finalised within the next week, a source close to the development told Inc42.

The deal will involve sharing of technical expertise and expansion of LaundryAnna’s physical stores, the source said.

While LaundryAnna refused to comment on the matter, an email sent to Quikr’s corporate communications team did not elicit any response to Inc42’s queries till the time of publication.

Yesterday (30th March), in a message sent to its users, LaundryAnna said that “LaundryAnna is now powered by Quikr and going forward all notifications shall be sent from our new sender ID QUIKRR” — indicating an acquisition.

LaundryAnna which was founded in 2015 by Prateek Rana and Rohit Melwin offers laundry and dry cleaning services. It allows users to schedule a pick-up using its platform.

According to an Inc42 source, Quikr is also planning to introduce self-service laundry systems i.e. laundromats. The concept of laundromats is quite new in India in comparison to the west. Laundromats are basically walk-in facilities popular in hostels, etc. offering walk-in laundry facilities — where people can simply pay and use washing machines to wash and dry their laundry. In India, Delhi-based UClean, Bengaluru-based WashBuddy and The Laundry Basket offer similar services. QuikrEasy Laundromats will go live in the next 10-15 days.

The unit will be part of QuikrEasy, the home services arm of Quikr which offers a host of services including — repair, electrician, trainers, and other day to day needs. The company already offers laundry services.

As of May last year, the company had five offline stores. The startup has created its own in-house processing and logistics infrastructure and is popular among college goers and residential societies.

In an earlier statement released by the company last year, it had claimed to be profitable since the 6th month of its operations.

Increasing penetration of the internet has undoubtedly helped the online consumer services space flourish. A large number of startups are now allowing people to get their mundane tasks completed with a few clicks. Success stories of startups like Urbanclap, Dunzo shows the potential this sector.

As far as laundry services are concerned, a report by FMI, titled “Laundry Care Market: Global Industry Analysis and Opportunity Assessment”, estimated that the global laundry sector will grow to reach $127 Bn by 2027 end with a CAGR of 5.3% during the forecast period.

The sector is fragmented with 7,67,000 establishments, 98% of which are micro-sized laundries with fewer than 10 workers. The organised segment comprises a mere 2-3% of the entire laundry market in India.

According to Inc42 DataLabs estimates, India has nearly 100 startups in the laundry space including — DhobiLite, UrbanDhobi, Pickmylaundry, Super Dhobi, Wassup, UClean, and Washbuddy. Besides there are many more hyperlocal services startups which offer laundry services as well including — Urbanclap, among others.

In terms of exits in this segment, in 2017, PickMyLaundry had acquired subscription-based laundry services provider OneClickWash in an all-cash deal. Before that, in 2016, Chennai-based Wassup had acquired Ezeewash in a full equity deal.

With about 15 acquisitions since 2015, Quikr has sought to grow across verticals through the acquisitions route. With its most recent acquisition India Property Online Pvt Ltd, a real estate platform and talks to acquire refurbished furniture marketplace Zefo, the company’s strategy is to build the transaction business on top of its classifieds business.

The group’s parent company Quikr India Pvt Ltd reported consolidated revenue of $24.54 Mn (INR 173.49 Cr) for the year ending March 2018, a jump of 95% from its revenue from operations in the year before.

Founded in 2008, Quikr claims to have a user base of over 30 Mn per month and operates across 14 classifieds businesses including mobile phones, household goods, cars, real estate, jobs, services and education.

The online classified platform has taken up the acquisition strategy to strengthen different verticals. It’s the strategy of combining the acquisition model along with its own large supply-and-demand base has helped it grow its business.  In January 2018, the company had reported that the acquired startups were responsible for up to 55% of Quikr’s overall revenues.

In a media statement, Quikr said it has signed a partnership agreement with LaundryAnna to expand access to its hyperlocal household services business, QuikrEasy. This strategic alliance will strengthen its overall online-offline convergence strategy. LaundryAnna plans to scale-up in partnership with Quikr.