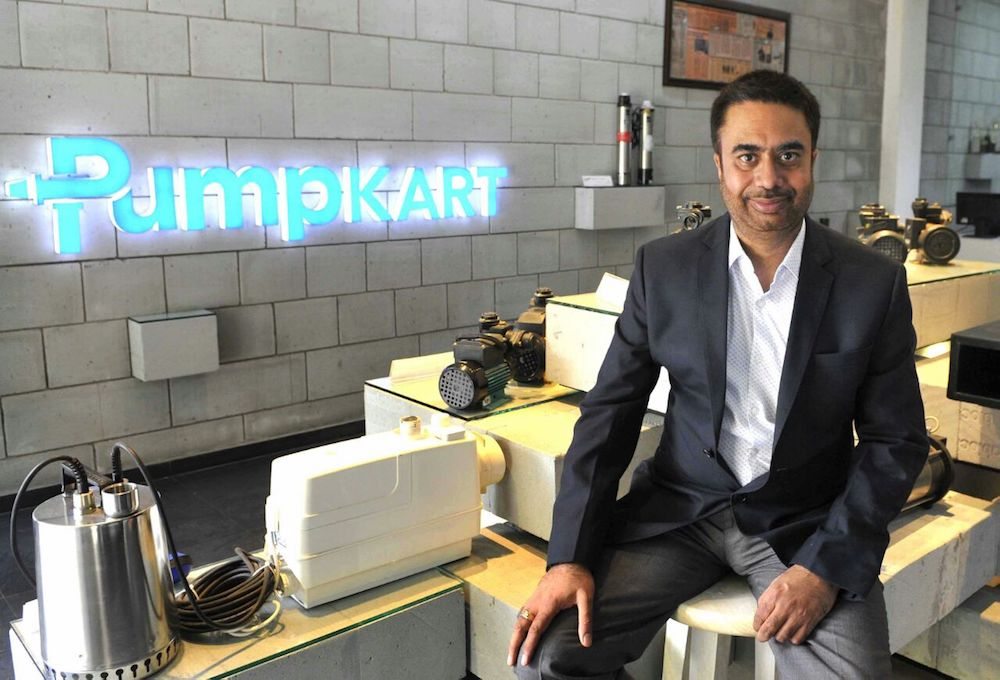 “In Chandigarh, a one-man retailer was selling water pumps and he decided to take his business online and today he is the largest retailer of water pumps in Maharashtra and Tamil Nadu,” said, Sundar Pichai, September 2015, at ‘Digital India’ dinner Conference, San Jose California.

Pichai was referring to K.S. Bhatia, who recently has closed a Seed funding round from Dr. Ritesh Malik, founder of Innov8 and Project Guerrilla for his online venture PumpKart.

Bhatia’s vision is to build PumpKart as the largest water pump company in India till 2025.

PumpKart Journey From B2C To B2B To A Private Label Brand

“India is exporting pumps to over 100 countries in the world but still, the domestic market is highly fragmented. Our focus is not to deviate from our core which is the pump industry and revolutionise the way pumps are being bought and used in the country,” says Bhatia.

A chemical engineer by education, Bhatia established his first company – Air Fluid in 1988 which deals in pumping projects. He spend almost 16 years of his lifetime in doing water pump projects with over 600 brands like Taj, Mariott, Radisson, and several other top builders and contractors in North.

It was in September 2013 he got a ‘domain name’ gifted by his 12 year old son, which eventually led him to step into the burgeoning Indian ecommerce space. It took him over six months to decide on the in and out of the available options and in May 2014, he finally launched PumpKart as a B2C platform, to sell water pumps online. Bhatia remained bootstrapped for all these years and went on infusing funds into his new venture from Air Fluid.

Despite coming from a B2B background, for Bhatia venturing into this space was majorly to understand the consumer mindset in the domestic and agricultural sectors. Everything went well initially – from gaining traction to being acknowledged by Google India as Regional SME Hero in January 2016. “We managed to sell 30-40 pumps per day, thereby selling around a 1000 pumps in a month. But the customer acquisition costs were high as a large sum of money is being burnt in Google adwords and logistics cost. We, thus, realised that in this manner, the company can never be profitable,” says Bhatia.

This realisation forced him to pivot and shift to a B2B model in February 2016, and thus, the team started partnering with retailers and sourced products directly from manufacturers. At this point, they had a network of about 180 manufacturer brands and 5000 dealer-distributors. Not only this, the team also launched an O2O hybrid store aka ‘touch and feel’ store in Chandigarh, wherein consumers can see the pumps and then place the order online.

“However, after a few months, we realised that this is not working as well. Plus, with retailers getting the factory prices along with the added facilities such as extended warranty, delivery and more, they started inclining towards Pumpkart. This disturbed the entire dealer-distributor network and ultimately, we were forced to deal with the distributors instead of manufacturers directly,” he adds.

With distributors added to the supply chain, the margins on the pumps, increased, thereby hampering their commitments with the retailers. At this point of time, KS decided to launch his own private labels – Panatech and WiFi. “These pumps are being sourced from Coimbatore, also known as the ‘City of Pumps’, where all pumps are manufactured and labelled for all major brands like Krompton, Bajaj, Usha,” says Bhatia.

Since then, there is no looking back for the company. Apart from its private label, the portal also sells products from other brands such as Bosch, Khaitan, Shakti, Havells and more. It is now generating $77.7K (INR 50 Lakhs) monthly revenue and also got profitable this month, as claimed by the founder.

PumpKart Services Store And App: The Next In Line Initiatives

The startup further aims to reach a revenue target of $155K (INR 1 Cr) per month by targeting Punjab, Chandigarh and Himachal Pradesh. There are also plans to add six more private labels to its existing portfolio by 2018. The company also plans to launch Pumpkart service – a platform to service pumps bought from the platform-through a franchise business model.

According to Bhatia, the major problem in the water pump industry is the lack of awareness. “Majority population is still dependent on plumbers for buying and setting up pumps, who never leave a chance to make the fool out of them. For instance, instead of a half HP pump, he will bring in only 0.25 HP Pump. This pump will work for only 3-4 years, wherein promise was made for 10 years.”

The Pumpkart consumer will be directly registered to the service center and the mechanic/ plumber will be provided to install the water pumps for an additional cost of INR 250. As claimed by the founder, it’s quite a minimal cost, considering INR 600-INR 800 that is being charged by plumbers. These physical stores will also extend their services to other large appliances which basically run on electric motors such as fans, washing machines and more.

“Today we have many service providing apps like Urbanclap, however, none has a physical touch point or a workshop. This is one thing, which any manufacturer in this space has not come up with. We have already finalised one franchise in Ludhiana and Rajpura (Punjab) and have already started with a pilot in Chandigarh,” he adds.

To battle these issues, Pumpkart products come up with all the added details and make sure the product matches with the description.

The team also plans to launch an app on the similar lines by the end of next month. The company also has partnerships in place with insurance providers like ICICI Prudentials to provide an insurance on the burnt motors. “Usually, only the windings of the pumps get damaged, and because of high voltage, motor gets burned. In such a case, an insurance can help consumers to get a claim and help getting them serviced. Plus, on an average, out of 50 water pumps, only one pump got damaged like this, so it’s a huge business for insurance companies as well,” he adds.