According to the DRHP, OYO has ESOP pool of 63.8 Cr options whose value upon conversion would be $1 Bn

The startup's offer includes issuance of fresh shares worth INR 7,000 Cr and an offer-for-sale amount to INR 1,430 Cr. 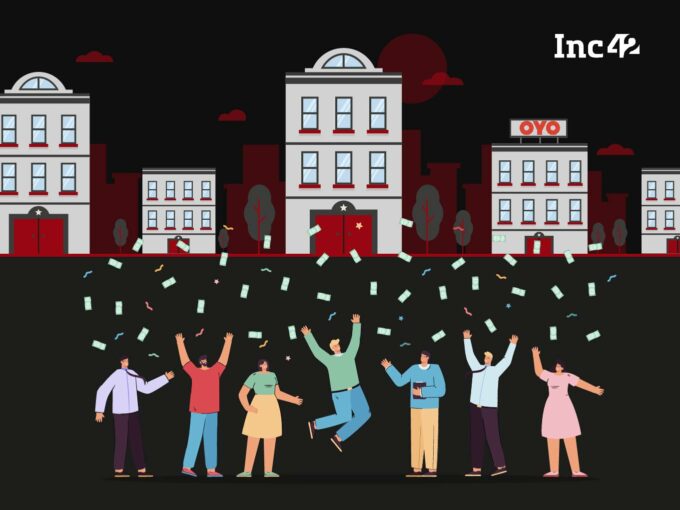 IPO-bound Oravel Stays which operates the hospitality giant OYO will be covering more than 80% (~1,200 employees) of its staff under its ESOPs scheme, according to Inc42 sources.

As per Inc42 calculation and OYO’s previous regulatory filings, OYO has a total ESOP pool of 638,240,000 options, which will be worth close to $1 Bn upon conversion.

The startup had allotted each equity share at $58,490 to Microsoft when it raised $5 Mn in its Pre-IPO round, and had later went on to split its equity shares at 1:10 ratio.

The startup had allotted 3,999 bonus shares for each share held, and for preference shareholders, OYO changed the conversion ratio to equity from 1:1 to 1:4,000, the regulatory filings show. Thereby reducing the equity share price to $1.46 or INR 109.

The Ritesh Aggarwal-led OYO which is going for an  INR 8,430 Cr public listing and is awaiting market regulator SEBI’s approval has allotted 1,14,56,030 equity shares worth INR  124 Cr upon ESOP conversion to 531 of its existing employees, according to hospitality giant’s filing with the MCA.

Founded in 2013 by Ritesh Agarwal, OYO last raised $5 Mn from US tech giant Microsoft at a valuation of $9 Bn. Earlier in July, the startup closed $660 Mn in term loan funding from global institutional investors. Back then the startup has allotted 80 preference shares and 5 equity shares to US-tech giant Microsoft.

At present, Masayoshi Son’s SoftBank holds 46.62% in the company, whereas OYO’s RA Holdings has 24.94% stake in the company. Founder Ritesh Aggarwal owns 8.21% stake in the hospitality unicorn, whereas Lightspeed, Sequoia and Airbnb has 2.74%, 3.24%, and 1.36% respectively.

OYO and Le Travenues Technology operated ixigo are the two Indian startups that are heading for a domestic IPO. ixigo, which offers online travel tickets has filed its draft red herring prospectus (DRHP)  to raise INR 1,600 Cr through an initial public offering.  The company had filed its DRHP in August this year, but is yet to receive SEBI’s nod.