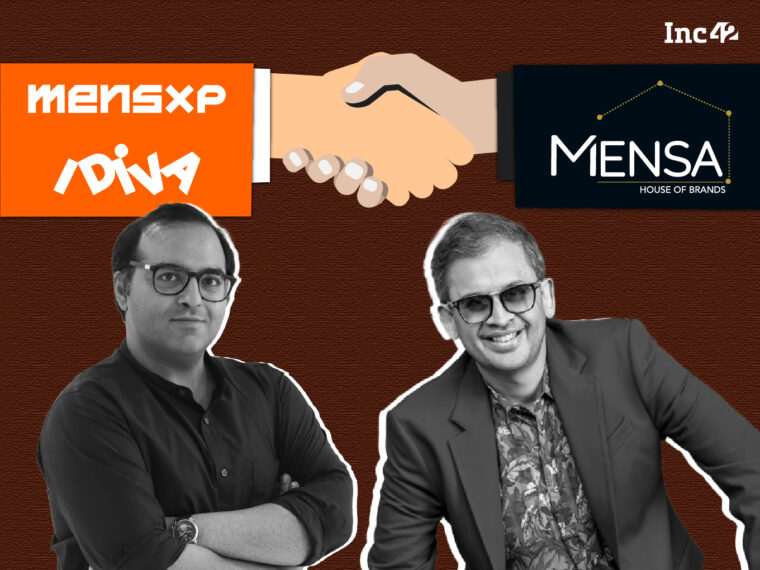 D2C ecommerce roll-up unicorn Mensa Brands is all set to acquire MensXP, a content commerce platform, and iDiva from Times Internet. As per sources, a deal has been chalked out between the two and is likely to be announced soon.

The acquisition will give Mensa Brands access to a larger millennial customer base of both MensXP and iDiva. As per sources, the deal size is expected to be around $100 Mn.

MensXP has started restructuring its team and is shifting its brand solutions and sales team to other verticals of Times Internet, such as IndiaTimes, the sources told Inc42.

According to the sources, the deal has been in the making for the past six months. “This is not a distressed sale. MensXP is doing well. This is sort of collaboration or creating something very big,” a person familiar with the matter said, adding that the vision of Mensa Brands and MensXP gels well together.

Queries sent to both Mensa Brands and Times Internet elicited no response till the time of publishing this story.

Apart from MensXP and iDiva, another platform of India Lifestyle Network (ILN), Hypp, a content creator management platform, will also be acquired by Mensa Brands. ILN, a property of Times Internet, is a community-focused network.

The merger will bring together brand-building capabilities, unique audiences, and communities through MensXP and iDiva with a total reach of over 200 Mn users across platforms with over 20 of the fastest-growing D2C brands in India another source added.

It must be noted that Mensa Brands has several men and women-focused brands under its umbrella. One of its earliest acquisitions was Villain, a fragrance brand for men which has also started selling men’s apparel and accessories. Other men-focused brands under it are Dennis Lingo, denim clothing brand High Star and Hubberholme, D2C fashion wear for both men and women.

All these brands are likely to reap benefits from MensXP’s strong social media presence, whereas women-focused brands such as Ishin, Anubhutee, Karagiri among others will be introduced to the large user base of iDiva.

Both MensXP and iDiva enjoy a significant fan following on social media platforms. While on Facebook, the main MensXP account has over 3 Mn followers, iDiva has 2 Mn followers. On Instagram, MensXP has over 561K followers, while iDiva has around 445K followers. It must be noted, both these brands have several other social media handles based on languages and content.

Mensa Brands, the fastest Indian startup to turn unicorn, has been on an acquisition spree. Last week it forayed into the electronics wearable space by acquiring Pebble.

MensXP, founded in 2009 by Angad Bhatia, is a lifestyle portal for men. Three years after its inception, it was acquired by Times Internet. MensXP, which focused on creating content on health, grooming, trending topics, and fashion for men, began its content-to-commerce play in 2019.

The brand claims it has 185 Mn monthly users, and an average daily order volume of 5K+ (including third-party and private label products). The brand’s average monthly revenue was around INR 15 Cr in FY22 and it is now aiming for INR 200 Cr in revenue for FY23.

Earlier this year, Inc42 interviewed MensXP founder Bhatia in which, he talked about the startup’s business, challenges and growth. He had then said that though MensXP offers ecommerce services to its customers, the content will always remain its backbone.

“We are a community-first media brand. Everyday, millions of young Indian men and women, consume our culturally relevant content. Commerce has been naturally woven into our editorial programming,” he had said.

However, only time will tell how MensXP ecommerce offerings and private labels are integrated with that of Mensa Brands, which powers the websites of each of its brands separately.

iDiva is an online video platform that creates content on trending topics and focuses on women. The brand offers content in various formats on trending topics, health and wellness, beauty, fashion, and relationship, among others.

Times Internet On A Selling Spree

With this, MensXP will become the third major brand under the Times Internet umbrella which got off-loaded. Earlier this year, Times Internet sold its dining and online restaurant booking platform Dineout to food delivery giant Swiggy. Though neither Swiggy nor Time Internet disclosed the deal size, as per Inc42 sources, Swiggy acquired Dineout for somewhere between $150 Mn to $200 Mn.

Times Internet has also been offloading its stakes in some startups during their public listings. The company, which was one of the early backers of Delhivery, got 139X ROI after selling its stake during the logistics unicorn’s IPO.