As per Inc42 estimate, the startup picked up the funding at $200 Mn pre-money valuation 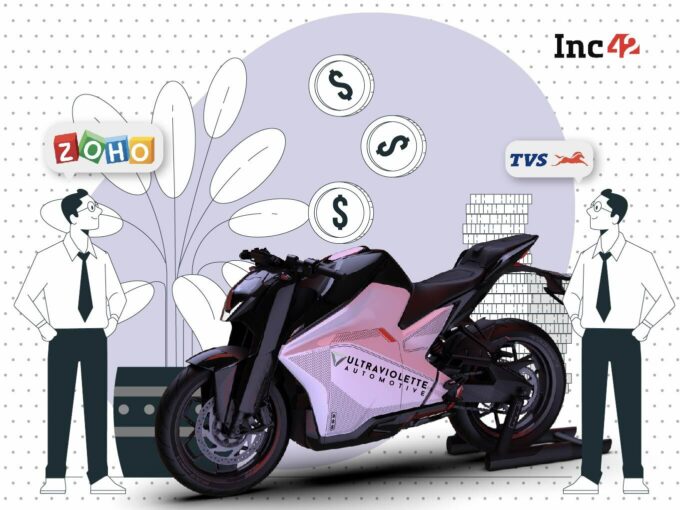 Bengaluru-based two-wheeler electric vehicle manufacturer Ultraviolette Automotive has picked up around INR 112.5 Cr (~15 Mn) in a fresh round of funding from TVS  and bootstrapped unicorn Zoho Corporation.

As per Inc42 estimate, the startup picked up the funding at $200 Mn pre-money valuation.

While its early backer TVS has pumped in INR 75 Cr, Sridhar Vembu led Zoho has infused INR 38 Cr in the current round. As per the recent filing, the company has said the fresh funding is for its ‘business requirements’. Post allotment, TVS will have 33.95% stake in the company and 2.46% will be held by Zoho Corporation.

In 2019, the startup had launched its flagship zero-emission connected electric motorcycle, F77 which is enabled with ride GPS fleet tracking, remote diagnostics, over-the-air (OTA) or wireless upgrades, regenerative braking, multiple ride modes, ride analytics and bike tracking. As per its website, the F77  claims to have a battery capacity of 4.2kWh and can have a full charge within 1.5 hours through fast charging. The company claims its bike can reach 0-60 kmph within 2.9 seconds and 0-100 kmph within 7.5 seconds.

In the two-wheeler EV space, Ultraviolette Automotive competes against the likes of Micromax founder-led Revolt. The startup also locks its horns with Bhavesh Aggarwal’s Ola Electric, which is yet to deliver its much-hyped escooters, Tarun Mehta’s Ather Energy, Suhas Rajkumar-led Simple Energy, among others. It is important to highlight that TVS had also launched electric scooter TVS iQube last year.