Despite the boom, Indian states are undecided on the legalisation of online gaming due to the indecisiveness of what comprises a game of skill or a game of chance 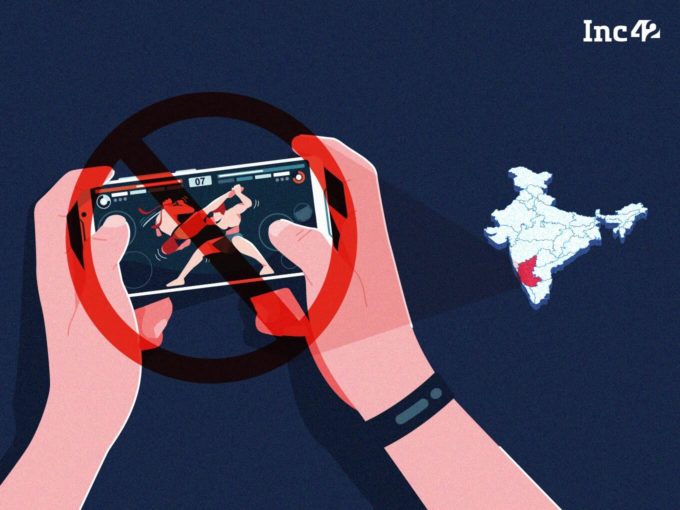 Indian online fantasy sports platforms have witnessed a surge in users in the last two years; majorly due to the onset of the pandemic, and the increased internet and smartphone usage.

Further, according to an EY report, the online gaming industry has the potential to generate $2 Bn in revenues by 2023 and is currently valued at over $1 Bn.

Meanwhile, the number of players betting real money on fantasy gaming platforms such as Dream11, Mobile Premier League (MPL), MyTeam11, Halaplay, 11 Wickets and My11 Circle, among others, is expected to reach 150 Mn in India.

Yet, like certain segments such as cryptocurrency, online gaming is an “ambiguous” concept for regulators despite the boom. Owing to the vacillating regulations, earlier this week, fantasy gaming platform Dream11 suspended its operations in Karnataka. A complaint was lodged against its founders — Bhavit Sheth and Harsh Jain, against the backdrop of a recent ban imposed by the state.

Inside Karnataka’s Online Gaming Ban: The When, Why & How

In September 2021, the Karnataka government passed a bill that banned online “games of chance”. Operating such games, sheltering such operations, and abetting and participating in such online games both cognisable and non-bailable is an offence, according to the bill.

The offence will lead to a prison term of up to three years and a fine of up to INR 1 Lakh under the Karnataka Police (Amendment) Act 2021.

The entire argument of Karnataka and other states banning fantasy gaming platforms stands on the ground that Dream11 and others are “games of chance” and not “games of skill”.

Games of chance include those that are entirely based on random factors of any type. For example, rolling dice, playing cards, and others where a player does not have control over the outcome of the result.

Games of skill are mostly based on the mental and/or physical level of expertise of a player, such as horse racing, carrom, chess, Rummy, Teen Patti and others.

The central conflict here is whether games like rummy and poker are “games of luck/chance” or “games of skill. While the former is disapproved of, the latter is considered to be acceptable.

With the bill, Karnataka aims to ban online games, “involving all forms of wagering or betting, including in the form of tokens valued in terms of money paid before or after issue of it”. It also banned electronic means and virtual currency, electronic transfer of funds in connection with any game of chance.

Some For, Some Against — A Game Of Chance Or Skill?

In the ensuing debate, Tamil Nadu had promulgated an ordinance to prohibit even games of mere skill (if played for stakes) as wagering or betting in cyberspace. This led to online gaming companies scramble to obtain a stay on the ordinance — which the Madras High Court granted. 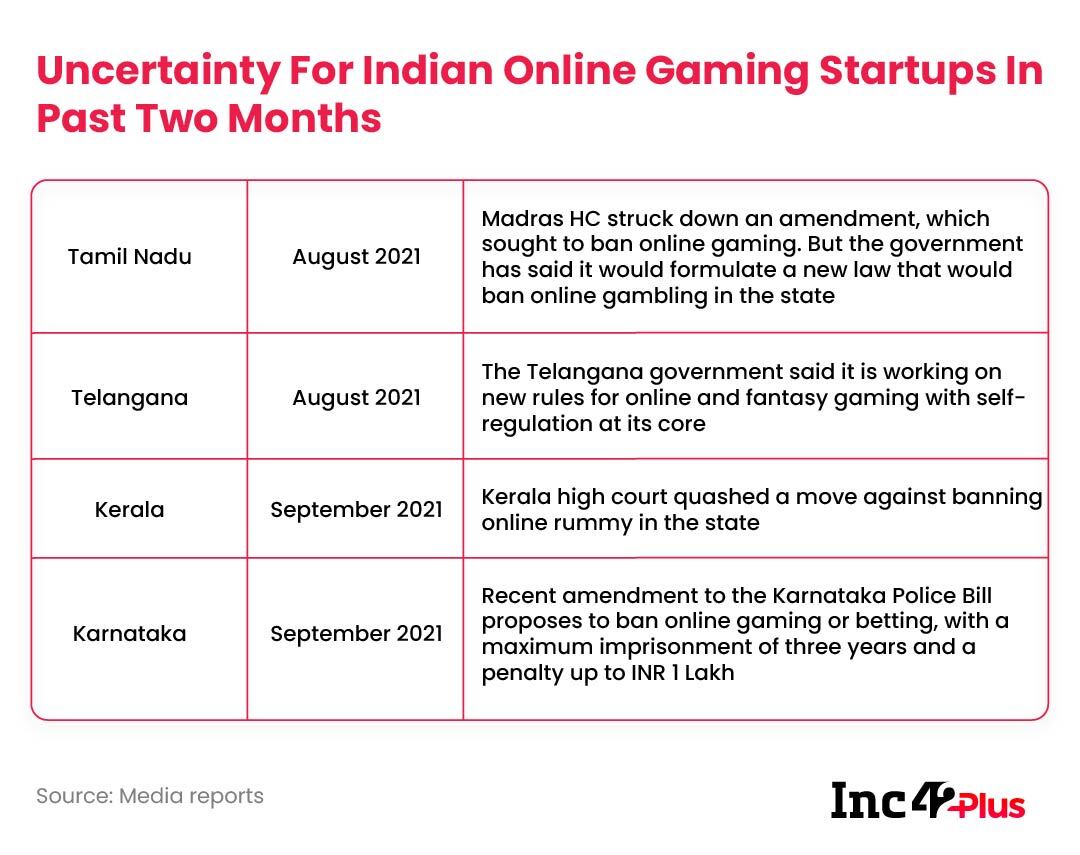 In a similar move to that of Karnataka and Tamil Nadu, other Indian states such as Telangana, Kerala, Odisha and Assam had also banned online real-money gaming due to a thin line of distinction between games of skill and games of chance.

Not just the companies, last year, a Chennai-based advocate filed a petition seeking a ban on online gambling apps, where he also sought the arrest of Virat Kohli and Tamannaah Bhatia for being the brand ambassadors of MPL.

He alleged that they are misusing their celebrity status and enticing lower and middle-class users towards betting, debts, gambling, instead of actual hard work.

Men’s Indian cricket team’s former captain MS Dhoni and Saurav Ganguly have also been on the legal radar for their association with Dream11.

States such as Maharashtra and Punjab, on the other hand, have supported fantasy gaming as a “game of skill”. The Supreme Court too has dismissed a petition seeking a ban on fantasy gaming in the past, classifying rummy and other games as games of skill.

Sikkim and Nagaland require online gaming operators to obtain special licenses to conduct their real-money games such as poker and rummy. But they are recognised as ‘games of skill’ and hence exempt from the state’s gambling regulations. 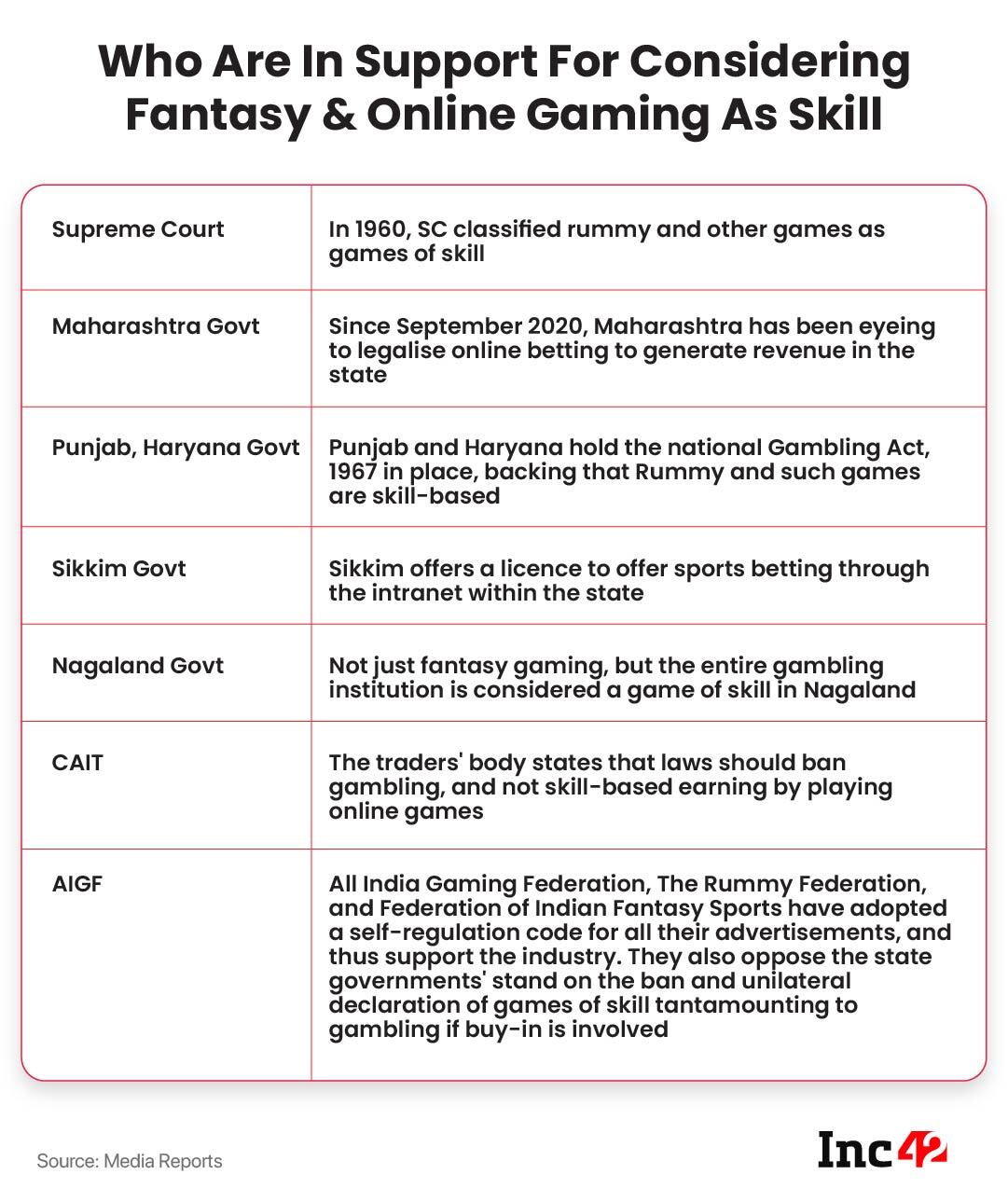 Amid the gaming boom in the country, the Confederation of All India Traders (CAIT) also sought the exemption of Indian online gaming platforms from the proposed law in Karnataka to ban online gaming and betting. The central theme is to ban gambling, and not skill-based earning by playing online games.

For instance, the All India Gaming Federation (AIGF), an industry body of ‘skill-based online gaming’, and three online gaming companies on October 5, filed writ petitions in the Karnataka High Court challenging the constitutional validity of the Bill by Karnataka.

Before release, each game has to be scrutinised by an army of lawyers who have to check the flow and user journey to ensure that they don’t violate any national or state laws. While the gaming industry is pushing for self-regulation rather than legislation or bans, the only way forward is to have a centralised framework.

This can only be possible if state-level cases are clubbed and brought to the Supreme Court.