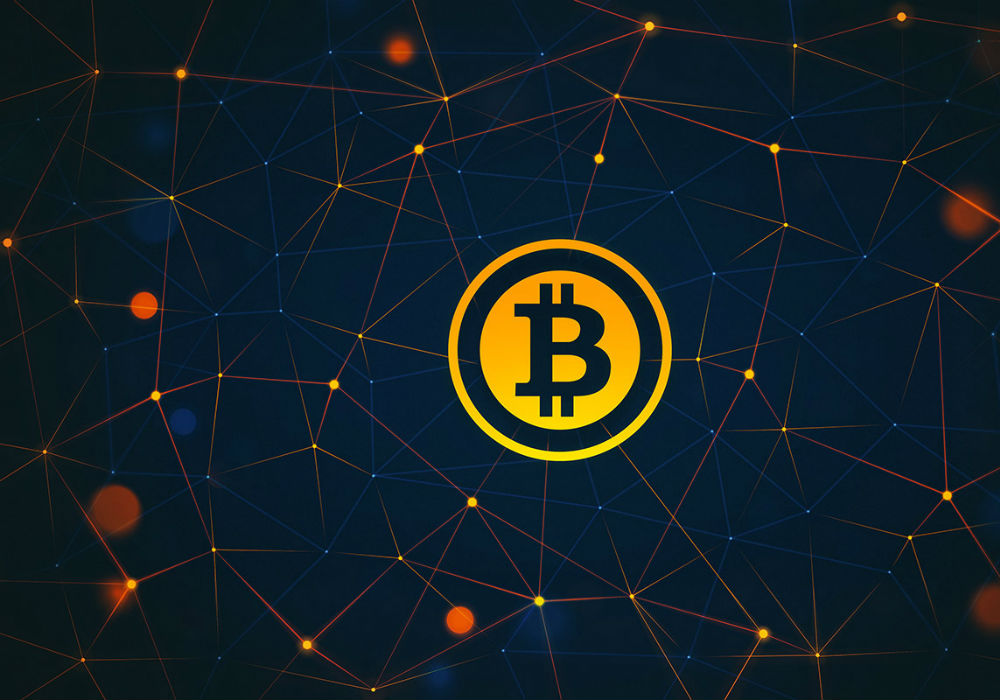 After high surge in prices, Bitcoin, Ethereum and the cryptocurrency market, as a whole, appears to have entered a bear period. This week, the market capitalisation of cryptocurrency has fallen down by $16 Bn.  This is almost a 31% decrease, from its all-time highs over the past one month.

The price of ether, the native cryptocurrency powering the ethereum blockchain, fell below $200 for the first time since May 20, 2017. According to data from cryptocurrency price information provider Coinmarketcap, the price of one ether token hit an intraday low of $192.22 across major exchanges. This is its lowest value in over 40 days of trading as per the Coinmarketcap data. 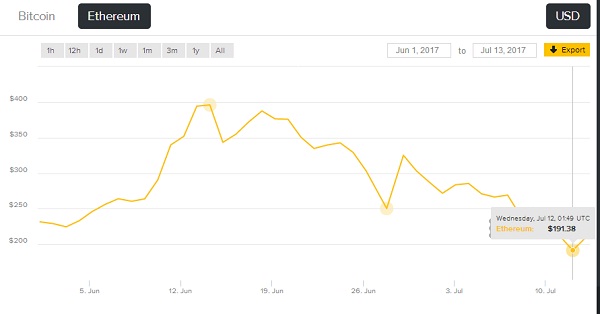 Consequently, ethereum has now fallen more than 50% since registering all-time highs of over $400 in early June. The fall started roughly after June 15.

Similarly, Bitcoin price dropped around 22% this week from its all-time high of $3,000 last month, and was trading at levels of $2,330, as per the Coindesk price index. As per Coindesk data, the total value of the token supplies for all publicly traded cryptocurrencies was just above $80 Bn, down from over $100 Bn last week. This also represented the lowest total observed since late May. 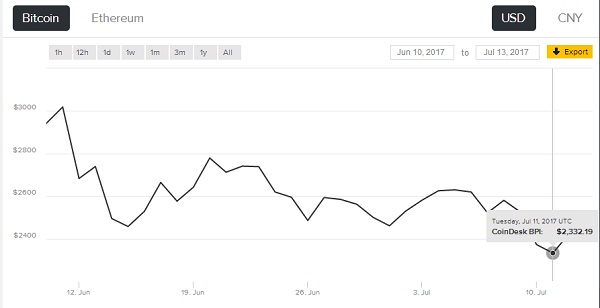 Ethereum differs from Bitcoin in many aspects such as block time, economic model, method of costing transactions among others. In Ethereum, the block time is set to 14 to 15 seconds compared to 10 minutes in Bitcoins. This allows for faster transaction times with Ethereum does this by using the Ghost protocol. The Ghost protocol in Ethereum is (Greedy Heaviest Observed Subtree) was introduced in 2013 as a way of combating the way that fast block time blockchains suffer from a high number of stale blocks – i.e. blocks that were propagated to the network and verified by some nodes as being correct but eventually being cast off as a longer chain achieved dominance,

Also, Ethereum has a slightly different economic model than Bitcoin. Bitcoin block rewards halve every 4 years whilst Ethereum releases the same amount of Ether each year, ad infinitum. So, more than two-thirds of all available Bitcoin have already been mined, with the majority going to early miners. Ethereum raised its launch capital with a presale in July 2015 and only about half of its coins will have been mined by its fifth year of existence.

Since the beginning of the year, investors have been aggressively pouring money into Ethereum with expectations that it could soon surpass Bitcoin as the number one cryptocurrency by market cap. Consequently, Ethereum’s value soared from $9.56 at the end of last year to the highest in June, touching $400 – growing more than 40x in a little less than six months. 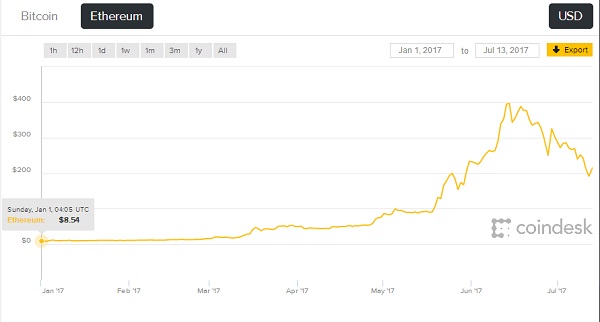 However, it appears that the recent surges in the currency have prompted a sell off among investors. Nevertheless, this slip in ethereum’s value coincides with a broader sell-off and volatility in the global cryptocurrency markets. Despite these declines, ether’s price remains substantially higher over the course of the year.

Experts believe that there has been a large net inflow in the crypto economy, of late, and this is starting to unwind as more reasoned expectations begin to set in. Nevertheless, many also believe that the correction is a minor one and not exactly a bear market. Cryptocurrency analyst Chris Burniske tweeted the following-

In 3 weeks #cryptoassets have corrected 30%. In context of historical #cryptocorrections this = minor, in context of stocks this = bear mkt pic.twitter.com/DxmtRGfNLg

Chris also mentioned in a Medium blogpost that cryptoassets could correct 75% and still be a bull market. He stated, “But this is crypto — unless you’re a day trader or professional asset manager, a month-long horizon is irrelevant, even distracting, from the long term vision.”

As per experts, a 20% decline may not necessarily mean that the crypto market has entered a bear territory, but it will be interesting to see how far this slide in Bitcoin and Ethereum prices continues, in stark contrast with the surges of the past month.

(The development was reported by Coindesk.)