ESPN Relaunches ESPNCricinfo As A Mobile-First Website And App

ESPN Relaunches ESPNCricinfo As A Mobile-First Website And App 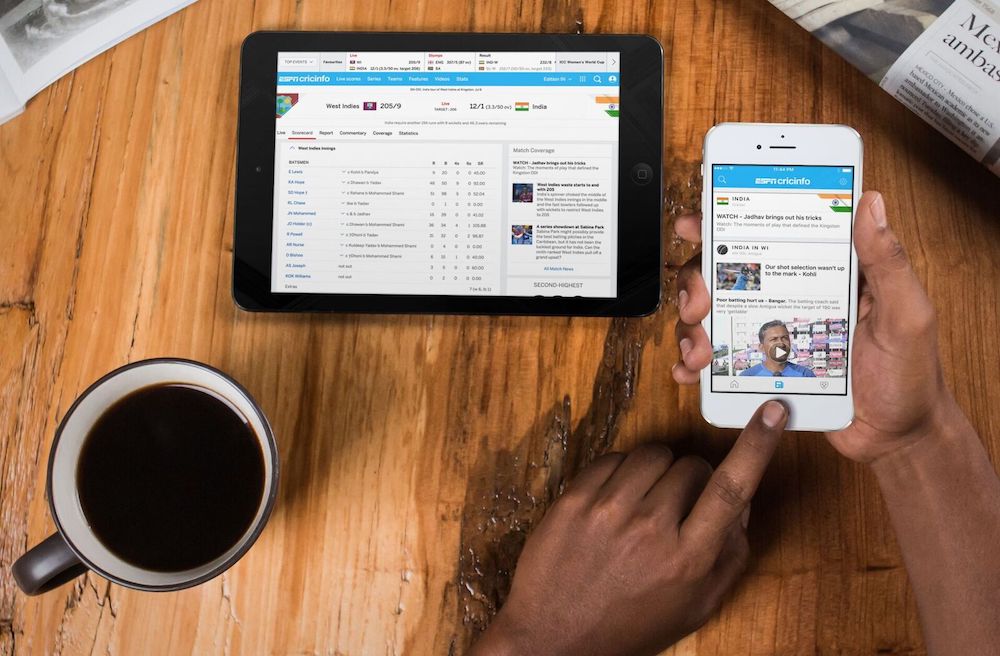 ESPN, which holds global sports events at the epicentre of its content strategy, has announced the relaunch of its ESPNCricinfo website and app. Under the relaunch strategy, ESPNCricinfo aims to become a mobile-first, live, and fast version for all kinds of news and updates exclusively for the game of cricket.

The new version of ESPNCricinfo will offer better authority, personality, and credibility features, as per an official statement. Both the new website and app will offer cricket fans a simple, clean and fast design with a major focus on personalised content. Mobile is central to their mission and the ultimate goal is to put ESPN on the smartphone/tablet home screen of every sports fan, everywhere.

Commenting on the re-launch, Anil Nair, Director Product Management, ESPN International said, “It’s the very nature of digital that you need to keep innovating. You can’t stand still. All good products have been recycled and they need to get to the next generation of products and the users. This is the guiding principle. And with the world all mobile-ready, we are positioning ourselves thoroughly as a mobile platform.”

Ramesh Kumar, Vice President. Head of ESPN India and South Asia further added that the relaunch is another step along an ongoing continuum of creating the best fan experience across every device and platform to help raise the overall game of cricket fans. “The all new ESPNcricinfo offers great new feature sets to enhance the overall mobile experience, keeps fans at the core of all coverage and in all delivers simple, smooth and personal product experience.” 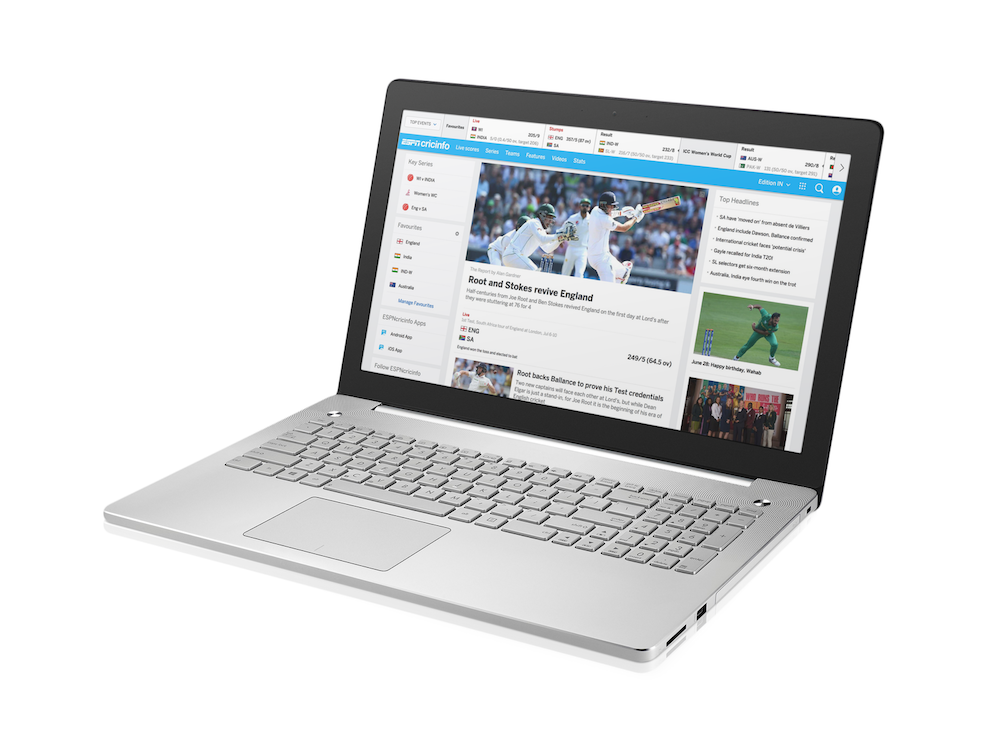 The revamped website and app are built on a technology and content management platform that reflects ESPN’s mobile-first focus with digital products. It will allow easier discovery and navigation of ESPNCricinfo’s enormous library of content.

The content is available across domains such as news, features, photos, fixtures, match results, players, ground information and more. Also, as digital news and content consumption is evolving, news is getting shorter and snappier, so the demand for content is becoming more visually oriented. The new app also showcases the expanding library of videos for its viewers in line with this need.

Apart from these, the most exciting feature available on the ESPNCricinfo app and website is Statsguru and Team Records. In Team Records, can see the records made across team, individual players, highest match aggregates etc. since 1974.

Statsguru, on the other hand, offers a complete interactive analysis of cricket records and statistics. Unlike the earlier version, the stats in the new version are updated live, as they happen and not at the end of the match. There is a basic query page – for the simple queries – and an advanced one, for the more intricate questions.

The database covers Tests, One-Day Internationals, Twenty20 Internationals and women’s cricket. There are two powerful tools to explore. Statsguru records – where you can generate your own records tables based on your chosen criteria and Statsguru analysis lets you interrogate and compare the records for individual players, teams, grounds, or officials.

For instance, if one wants to know, “Since 1990, how many times have teams been bowled out for less than 100 runs in an innings in Tests? then the following page will appear: ESPNCricinfo’s marketing communication will focus on the different kind of cricket fans and how each of the key product features can help these fans to raise their game, in order to promote the relaunch. “Promotion of ESPNcricinfo will be supported by this theme on ESPN digital properties in India besides the use of digital platforms like search and social. We would run activations around this theme, integrate the core offerings of the new product in our video shows, and air promotions on television as well,” adds Ramesh.

In 1994, when the concept of Internet was alien to many, ESPNcricinfo (erstwhile Cricinfo) came up with the idea of typing and archiving the scorecard. In the mid-nineties, when the internet speed was 56kbps–128kbps, Cricinfo in partnership with Rolling Stones magazine managed to live stream the Sharjah Series (where Sachin Tendulkar made his famed century). Later on, in 1997, cricinfo started getting advertisement deals primarily from India and England which was one of the biggest breakthroughs for the company that was only six years old that time.

Cricinfo raised its first and crucial funding of $116.35K (£100,000) in the late nineties which enabled the company to hire more people in India. The company could expand its base for the first time and, since then, there has been no looking back. When ESPN acquired cricinfo in 2007, it was renamed as ESPNCricinfo. In 2015, ESPN partnered with Sony Pictures Networks India to create Sony ESPN and Sony ESPN HD and by 2016 we had two digital properties ESPN.in and ESPNCricinfo.

ESPN: Strengthening Its Roots In The Indian Hemisphere

ESPN (Entertainment and Sports Programming Networks) has been serving digital content across different sports verticals such as Cricket, Football, Tennis, NBA, Golf, etc. since the early 90s globally. At present, there are 10 editions up and running on the ESPN platform for different countries including Africa, Bangladesh, India, Pakistan, UK, Australia, New Zealand, Sri Lanka, the US, and global.

As stated by Ramesh, “Although cricket has been the primary sports in India, at ESPN, we realised that there was a need for a multi-sport platform giving sports fans a one-stop destination for global news, features, and videos that were underserved by any digital offering in the region.”

As claimed by the company, in the last six months, ESPN.in and the ESPN app have averaged more than 11 Mn visits per month that account for nearly 104 million minutes of engagement from India and the subcontinent.

With the relaunch of ESPNCricinfo, ESPN wants to further strengthen its roots in the Indian subcontinent and be a one-stop destination for cricket fans’ daily updates and content consumption. The re-launched version aims to cash upon the rising mobile-only population of the country.

As Anil says, “We have worked hard on making sure that our product works well in all kinds of market as well as network conditions. India, particularly, is the most exciting market when it comes to mobile content consumption, owing to the fact that there is almost a generation of users that is mobile-only. We have tried to make a personalised experience for Indian cricket fans and have made the app and website compatible to all kinds of networks – fast or slow. The technology has been used to optimise the app well.”

Going by the facts, in January 2016 India crossed the milestone of 1 Bn mobile subscribers. In fact, according to the ‘Household Survey on India’s Citizen Environment & Consumer Economy’ (ICE 360° survey) conducted in 2016, 88%  of households in India today have a mobile phone. As per a study conducted jointly by the Associated Chambers of Commerce (Assocham) and Deloitte, the Internet user base in India is expected to reach 600 Mn by 2020. Further, India’s smartphone user base has been projected to grow to 467.9 Mn by 2021 from the current 340.2 Mn, as per Statista.

While the opportunity is huge, ESPNCricinfo will also have to watch its back on the pitch with other players on the Indian field. This includes popular cricket information portals like Cricbuzz (which is ranked ahead of ESPNcricinfo), NDTV, Star Sports, Hotstar as well as Google, which recently started promoting its sports update feature aggressively. Check out the TV commercial below:

“Mobile devices are the ever-present gateway to the sport for millions of fans every day. Personalisation is becoming more and more important to fans. Video consumption is growing in India and on ESPNcricinfo we have seen that fairly dramatically, with nearly 230 percent increase in the second quarter of 2017. And since we have always been ahead of the curve, we are committed to creating the best fan experience across every devices and platforms by combining our core strengths: sports content, technology leadership and digital product development,” adds Ramesh.

ESPNcricinfo maybe late to the mobile-first party, it has always maintained massive user engagement. Add in the fact that it stands at number four in the Sports media news category, in a market that is finally beginning to see the potential of a sport apart from cricket, and ESPNcricinfo has its work out to score a winner in the game of Indian sports app and websites.