As the Indian startups saw a funding boom over the last year or so, ESOP buybacks by them also saw a huge increase

The startups undertake ESOP buybacks to share their success with their employees; Indian employees have made $159 Mn through these buyback programmes

As the startup ecosystem grows in the country, one of the trends that picked up over the last few years has been the startups offering employee stock ownership plans (ESOPs) to employees to reward them. As the startups saw a funding boom over the last year or so, ESOP buybacks by them also saw a huge increase.

ESOP programmes are a way of rewarding the employees and also have them much more invested in the success of the startups. Shares granted under the ESOP programme act as an additional income source for the employees.

As the Indian startups grew and raised new rounds of funding, the year 2021 saw many of them rewarding the employees through ESOP buybacks. Swiggy, Unacademy, FirstCry and Zerodha are among some of the major startups which opted for ESOP buybacks to share their success with the employees in 2021.

The trend has continued in 2022 as well, with 16 startups – ranging from edtech to foodtech to crypto – going for ESOP buybacks. Let’s take a look at some of the major startups who bought back shares in 2022.

ESOP Buybacks By Indian Startups In 2022

In a press statement, the fintech unicorn said it was its largest ESOP buyback program, with around 650 current and former employees participating.

IPO-bound fintech startup Pine Labs announced INR 100 Cr ESOP  ($13.1 Mn) buyback in March this year. However, the unicorn did not disclose any further details of the ESOP buyback programme. In continuation to that, the fintech startup announced a $50 Mn funding round led by private equity company Vitruvian Partners at valuation of over $5 Bn. The funding round also comprised a $15 Mn ESOP buyback.

The startup has been on a fundraising spree in 2022. In January, it raised $20 Mn in a funding round from SBI, while it received $150 Mn from Alpha Wave Ventures in February.

Foodtech unicorn Rebel Foods in March announced the completion of a $10 Mn ESOP plan for 150 current and former employees.

According to its RoC filings accessed by Inc42, Rebel Foods’ former and current employees participated in the ESOP buyback.

In 2020, Rebel Foods became a unicorn after raising $175 Mn in its Series F funding round. The round was led by Qatar Investment Authority (QIA) in participation with Coatue and Evolvence. The round helped Rebel’s valuation soar to $1.4 Bn.

The foodtech unicorn has earmarked $150 Mn for strategic investments, brand acquisitions and to expand its footprints to foreign countries.

While the startup did not disclose the number of employees who would benefit from the buyback, a CoinSwitch spokesperson told Inc42 that the number was expected to be small as most of the hiring activities took place over the last year and the ESOPs given to them were yet to vest.

In October 2021, CoinSwitch sealed its Series C funding round, raising $260 Mn at a valuation of $1.9 Bn. The funding round was led by Coinbase Ventures and Andreessen Horowitz (a16z). 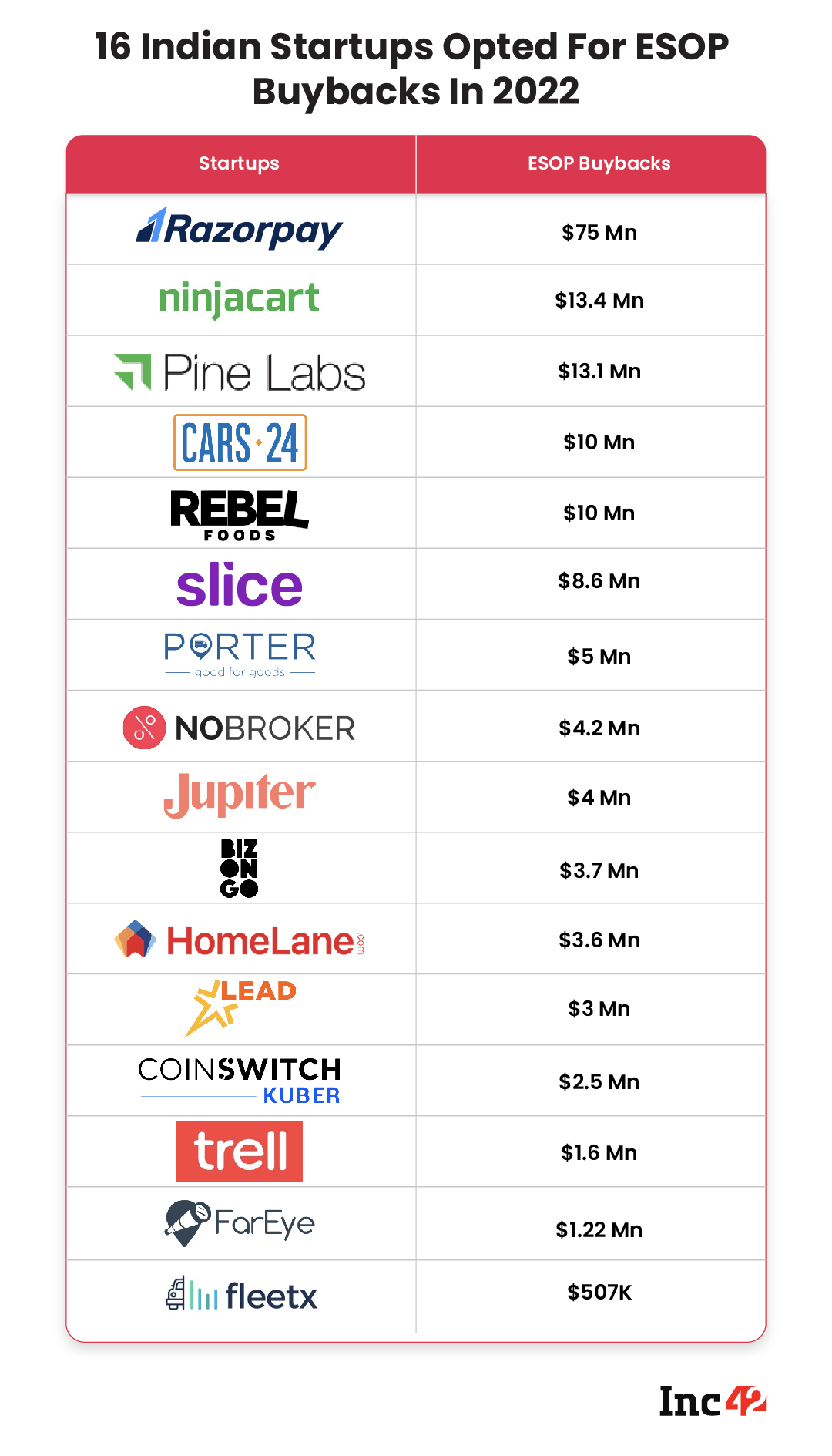 Mumbai and Bengaluru-based neobank startup Jupiter initiated ESOP buyback for several of its employees across the company. The stock options, obtained from both present and past employees, amounted to $4 Mn in liquidity transactions. According to a statement, 21 former and present employees benefited from the transactions.

Prior to this, the startup bagged $87 Mn in Series C funding round led by Tiger Global, while QED Investors, Sequoia India and Matrix Partners also participated in the round.

The value of the total ESOPs buyback by the company stood at INR 113 Cr, it added.

Earlier in December 2021, the auto ecommerce platform had bagged $400 Mn in its Series G funding round led by Alpha Wave Global. It joined the unicorn club in 2020 after raising $200 Mn in the funding round. So far, it has raised $1.3 Bn in funding.

Edtech startup LEAD initiated ESOP buyback worth $3 Mn for its employees in February this year. The ESOP buyback followed its Series E funding round worth $100 Mn led by WestBridge Capital and GSV Ventures.

The startup was valued at $1.1 Bn in the funding round, thus entering the unicorn club.

The startup said that the ESOP buyback would help it retain talent. The edtech startup claims that nearly 20% of its employees own ESOPs.

Late 2021, the fintech startup joined the unicorn club after raising $220 Mn in its Series B funding round led by Tiger Global and Insight Partners. The round also saw participation from other investors such as Advent International’s Sunley House Capital, Moore Strategic Ventures, Anfa, Gunopsy, among others. Its existing investors – Blume Ventures and 8i – also participated in the round.

Supply chain startup Bizongo concluded its ESOP monetisation program in February this year. As part of the buyback program, nearly $3.7 Mn worth of ESOPs were liquidated.

The startup informed that of the total 102 current and former employees eligible for the scheme, 70% opted for the buyback. Bizongo had kept the total ESOP pool at $4.8 Mn. The ESOPs were offered to employees depending on different stages of their tenure.

SaaS startup FarEye reportedly announced an ESOP buyback program worth $1.22 Mn in late January this year. It was the second buyback programme by the startup.

Founded in 2013 by Nahata, Gaurav Srivastava and Gautam Kumar, FarEye is a Software-as-a-Service (SaaS)  mobility platform. The company aims to solve the complicated last-mile delivery issues through its automation softwares that allows companies to schedule and dispatch jobs, monitor execution and analyse performance in real time, making enterprises more effective and streamlined. Earlier in January 2021, it had initiated an ESOP buyback programme worth $739K.

In 2021, the startup garnered $100 Mn in its Series E funding round led by Dragoneer Investment Group and TCV. A portion of the capital infusion was used to expand its software platform capabilities and attract talent.

The startup has raised an aggregate of more than $62 Mn in venture capital from investors including Mirae Asset Ventures, H&M Group, Samsung Ventures, LB Investments and others.

Intra-city logistics startup Porter initiated an ESOP programme worth $5 Mn in January this year. A statement from the startup said that the ESOP programme was designed for 80% senior and mid management and 20% for lower management employees.

Founded in 2014 by Pranav Goel, Uttam Digga and Vikas Choudhary, Porter is a logistics platform that optimises last-mile delivery operations for businesses.

Proptech unicorn NoBroker completed its ESOP buyback worth INR 32.2 Cr ($4.2 Mn) in March this year. As part of the buyback program, 95 former and current employees of the startup were given the opportunity to liquidate their stock options, which constituted 57% of the total employees who had ESOPs.

In 2021, the proptech unicorn turned into a unicorn after raising $210 Mn in a Series E funding round from General Atlantic, Tiger Global and Moore Strategic Ventures. The round took the total funding raised by the startup to $424 Mn.

HomeLane announced an INR 27 Cr ESOP buyback program in January this year, its second such program, according to the startup. In 2020, it bagged $50 Mn in a Series E funding round led by IIFL AMC’s late-stage tech fund, OIJIF II (Oman India Joint Investment Fund) and existing investor Stride Ventures.

The startup said many of its employees invested their gains in homes, cars, retirement funds and also donated to the causes they believe in.

Founded in 2014 by Rama Harinath, Srikanth Iyer, and Vivek Parasuram, HomeLane offers personalised and tech-enabled interior design solutions for customers looking to design/redesign the interior of their homes. It claims to have served over 20,000 customers.

Agritech startup Ninjacart concluded ESOP buyback worth more than INR 100 Cr in January 2022. Both current and former employees of the startup with vested ESOPs as of December last year were eligible to participate in the programme.

Founded by Thirukumaran Nagarajan, Sharath Loganathan, Sachin Jose, Kartheeswaran KK and Vasudevan Chinnathambi in 2015, Ninjacart sources fruits, and vegetables and other groceries from farmers and suppliers to sell them to supermarkets, kirana stores and other retailers.

Late 2021, the startup garnered $145 Mn from Walmart-backed Flipkart, valuing it between $700 Mn and $800 Mn. The startup is also expanding its footprint into the FMCG segment, procuring from big brands and selling to store owners and other resellers.

SaaS startup Fleetx.io completed ESOP buyback worth $507K as a part of its Series B funding round. The round was led by IndiaMART.

According to the startup, the ESOP buyback programme was rolled out to 45 eligible current and ex-employees as part of the closure of its Series B funding round.

The article has been updated to include ESOP buybacks announced in May 2022.