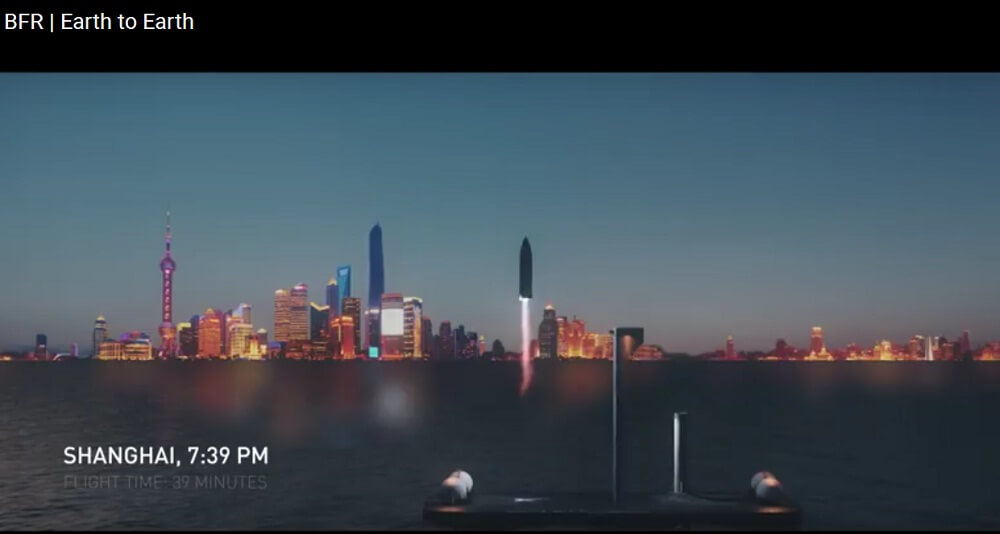 Last week, Elon Musk’s Tesla announced that it has filed a patent for a new battery swapping robot that can lift a vehicle and change its battery pack for a new one in just 15 minutes. And this week, his other company SpaceX is in the news as Elon Musk unveiled revised plans to travel to the Moon and Mars. At the International Astronautical Congress in Australia, Elon Musk stated that using that same interplanetary rocket system for long distance travel on earth, it would be possible for passengers to take most long distance trips in just 30 minutes. Or basically go “anywhere on Earth in under an hour” for around the same price of an economy airline ticket with SpaceX’s forthcoming mega-rocket codenamed Big Fucking Rocket.

For this incredible task, Musk proposes using SpaceX’s forthcoming mega-rocket or BFR for short to lift a massive spaceship into orbit around the Earth. This ship would then settle down on floating landing pads near major cities.

Both the new rocket and spaceship are currently theoretical, though Elon Musk mentioned that he hopes to begin construction on the rocket in the next six to nine months. However he added that he eventually plans to pivot from his current work on multiple types of rockets to working solely on the BFR. But that won’t come until SpaceX has sent its manned missions to Mars and the deadline for that isn’t until 2024.

Big Fucking Rocket By SpaceX For City To City Travel

In SpaceX’s video illustration of the idea, passengers take a large boat from a dock in New York City to a floating launchpad out in the water. There, they board the same rocket that Elon Musk wants to use to send humans to Mars by 2024. But instead of heading off to another planet once the rocket leaves the Earth’s atmosphere, the ship separates and breaks off towards another city Shanghai.

Other such routes proposed in the video include Hong Kong to Singapore in 22 minutes, London to Dubai or New York in 29 minutes, and Los Angeles to Toronto in 24 minutes, and more.

This proposed method of travel from one city on earth to the other would be, by far, the fastest ever created by humans. As per Musk, the ship would reach a speed of about 18,000 miles per hour at its peak.

While the concept is still theoretical, Musk did not give out details on the logistics, or the number of people who could be transported per trip, what could be their possible experience through this mode of travel, or about how would it be regulated. Neither did he say when SpaceX might attempt such a feat. For now, he has just thrown open the idea to the public that travelling to any place on earth could become a matter of an hour if SpaceX goes through its plans. With electric cars, hyperloop, boring tunnels underneath for clearing up an alternative way of transport, and SpaceX, Elon Musk looks hell bent on changing dramatically how people travel on earth and beyond.

(The development was reported by The Verge)