Electric Vehicles This Week: Govt To Roll Out New EV Policy, Ahmedabad Municipal Body To Get 50 E-Buses, And More

Electric Vehicles This Week: Govt To Roll Out New EV Policy, Ahmedabad Municipal Body To Get 50 E-Buses, And More

Important Developments From The World Of Electric Vehicles [26 July - 1 August, 2018] 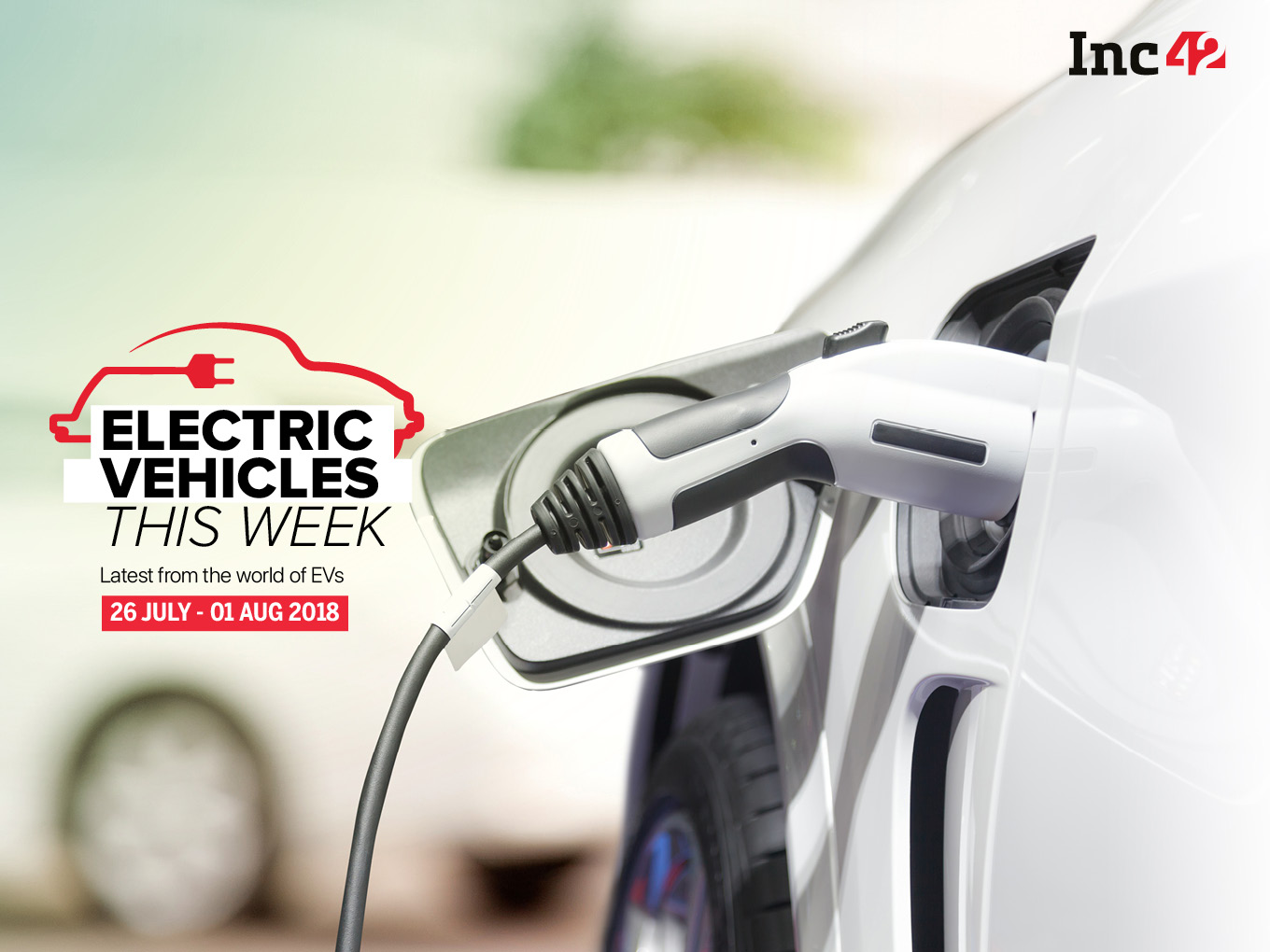 Unable to hold out against the EV revolution sweeping the world, the central government has decided to roll out a new policy for promotion of electric vehicles in the country. The EV policy, advocating minimal subsidies, will start with creating favourable ecosystems in nine polluted cities.

It is likely to be announced at a global e-mobility summit to be inaugurated by Prime Minister Narendra Modi on September 7.

The policy will be implemented on a smaller scale initially to ensure a smooth transition and elicit cooperation from automobile manufacturers, a government official familiar with the development was cited as saying in media reports.

According to the source, the government has already started consultations with industry bodies, including the Confederation of Indian Industry (CII), the Federation of Indian Chambers of Commerce & Industry (FICCI) and automakers. The consultations span five aspects — challenges and support required for electric vehicle manufacturing, battery manufacturing, setting up of charging infrastructure, promoting electric vehicles in commercial fleets, and the role of renewable energy in electric mobility.

The move is in line with India’s plan to reduce its carbon emissions. Only recently, government think-tank Niti Aayog instructed Indian states to procure electric buses for public transportation under its 15-point action plan ‘Breathe India’.  The ministry of petroleum and natural gas (MoPNG) on July 23 asked the Supreme Court to ban the sale and manufacturing of Bharat Stage-VI non-compliant vehicles in India, starting April 1, 2020.

Let’s take a look at EV developments in our 34th edition of Electric Vehicles This Week.

Indian Automaker Mahindra and Mahindra plans to launch its first electric SUV in the next fiscal year. The company is planning to introduce two new electric vehicles by 2019, and one of them is possibly the Mahindra KUV100 electric vehicle.

Pawan Goenka, managing director, M&M, confirmed that the new electric SUV will be launched in the 2019-2020 financial year, and is likely to be based on the KUV100. “The electric KUV100 will get an all-new electric powertrain,” Goenka said.

Currently, Mahindra Electric, the EV arm of M$M, sells e2O Plus hatchback and the e-Verito electric sedan. The carmaker also offers the e-Supro in the light commercial vehicle segment.

Ahmedabad Municipal Corporation To Get 50 E-Buses

Ahmedabad Janmart Ltd (AJL) has signed an agreement with commercial vehicles manufacturer Ashok Leyland for nearly 50 electric buses to be deployed on the Ahmedabad Bus Rapid Transit System (BRTS) corridor by next year. AJL is the ‘special purpose vehicle’ incorporated by the Ahmedabad Municipal Corporation (AMC) to run and operate BRTS buses.

The Times of India cited AMC Commissioner Vijay Nehra as saying that the electric buses will be operational by Q1 2018-19. AJL has an existing fleet of 250 buses, 50 of which will be replaced by electric ones. Ashok Leyland will run and manage the buses, including maintenance, the appointment of drivers, and installing chargers, with the AMC paying a per-kilometre running charge to the company.

The agreement is part of the Faster Adoption and Manufacturing of (hybrid &) Electric Vehicles (FAME) programme. The Central government is said to have provided funding to procure the buses. Further, the AMC has also applied to the state government for viability gap funding.

Hyundai To Bring An Electric SUV To India Next Year

South Korean auto major Hyundai plans to launch an electric SUV in India next year. The company will produce the EV model from its Chennai plant.

According to a top executive at the company, Hyundai is preparing to test the country’s EV market before going full throttle with local manufacturing for such vehicles. The company, which operates in India through a wholly owned subsidiary, plans to bring the EVs as completely knocked down (CKD) units.

“We will launch an electric SUV in the second half of 2019. Out of eight, two are new segment products, one electric SUV and other five full model changes to replace current vehicles,” Hyundai Motor India MD and CEO YK Koo said.

Tata Motors May Get Show Cause Notice On EV Order

The government is likely to issue a show-cause notice to Indian automotive manufacturer Tata Motors seeking reasons for not scrapping its first bulk order for electric cars to the company, people familiar with the development were cited as saying in a media report. The order was routed through Energy Efficiency Services Ltd (EESL), the state-run agency that is responsible for the procurement of the cars for government departments.


The move comes after the performance of the first batch of cars Tata Motors delivered as part of the 5,000-vehicle government order didn’t meet industry standards. and as the company is seeking changes to the specifications for further supplies, the sources said.

Tata Motors said it hasn’t received any warning from the EESL and termed other questions, including on the performance of its cars as “speculative”, the Economic Times reported.

BMW To Invest $1.17 Bn In EV Plant In Debrecen, Germany

German luxury automaker BMW plans to invest $1.17 Bn to build a new plant in Hungary as part of its strategic push to “build where you sell”. The carmaker said the plant would be built near the city of Debrecen in Germany and would have a production capacity of 150K cars.

“Our new plant in Hungary will also be able to manufacture both combustion and electrified BMW models — all on a single production line,” BMW AG Board Member for Production Oliver Zipse said.

US-based package delivery and supply chain management company United Parcel Service (UPS) has announced a collaboration with Thor Trucks Inc to develop and test a fully-electric Class 6 delivery truck in Los Angeles, California. The truck is expected to be ready for deployment later this year.

The UPS aims to work with a range of vehicle manufacturers to test and deploy promising alternative fuel and advanced technology vehicles that will help it meet its sustainability goals. Thor Trucks is a fleet-focused transportation lab based in California.

The Thor electric delivery truck will have a driving range of approximately 100 miles. It will be powered by a lightweight, durable battery designed and built by Thor that enables long-range driving distances.

Chinese electric bus manufacturer BYD has reportedly joined CharIN, a coalition of global automotive firms supporting the combined charging system (CCS) as a global standard for EV charging. A BYD top executive said that the company, with the support of the CCS, will pave the way for more efficient transportation solutions.

“As the largest producer of electric batteries in the world and the safest bus battery in the market, our membership in CharIN is an example of our continued efforts to advance and expand the electric vehicle ecosystem,” BYD North America vice-president (Coach & Bus) Bobby Hill said.

BYD has a wide range of battery-electric heavy-duty trucks in the US market, and all next-generation Class 6, Class 7, and Class 8 BYD trucks will offer customers an option of using the company’s proprietary charging system or a CCS Type compliant system.