Important Developments From The World Of Electric Vehicles [8-14 February] 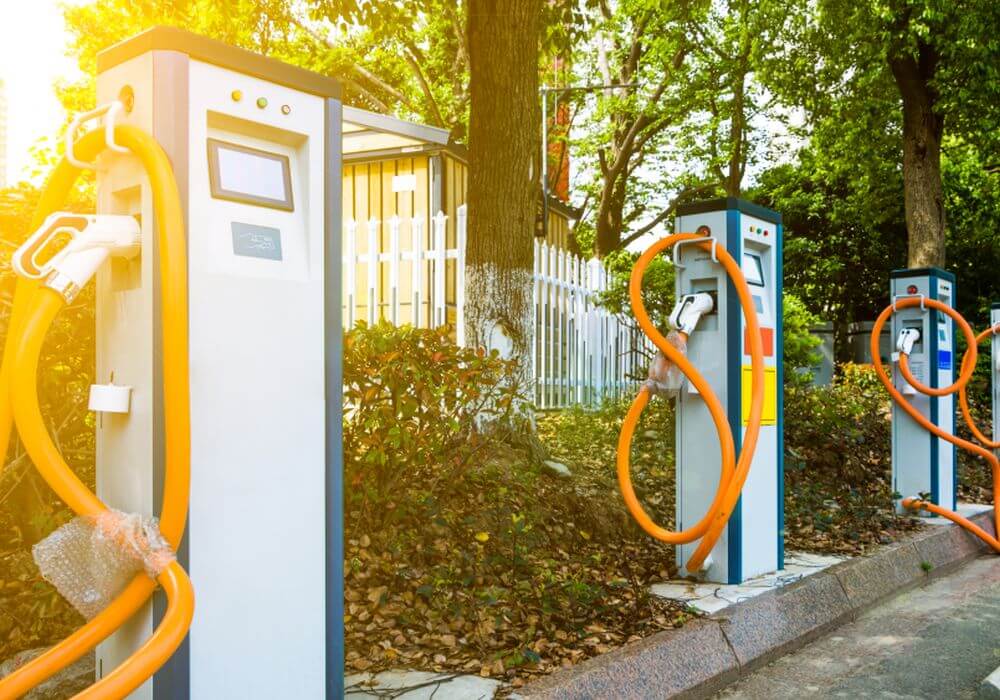 In recent months, thanks largely to the government’s EV push, India has been witnessing a heightened interest in electric vehicles and other green mobility solutions. The focus this week was the Auto Expo 2018, which saw 28 market-ready electric vehicles being showcased across different segments.

While Noida-headquartered Lohia Auto unveiled an electric three-wheeler called Comfort E-Auto, Gurugram-based Twenty Two Motors launched its smart electric scooter known as Flow. In other news, as per a newly-released report by ASSOCHAM and EY, the Indian electric vehicles market is expected to record double-digit growth rates with rise in sales volume annually in India till 2020.

Bengaluru-based Lithium Urban Technologies, which incidentally is the country’s first provider of electric cab services for corporate clients, is looking for partners to set up an electric vehicles charging infrastructure.

Coming to international news, Porsche and Volkswagen-owned Audi have reportedly teamed up to develop a joint platform for electric vehicles. The technology, according to the companies, will help them significantly cut costs.

Given that so much has been happening in the country’s electric vehicle sector, we bring to you the 12th edition of the weekly EV roundups.

The electric vehicles (EV) market is expected to record double-digit growth rates with rise in sales volume annually in India till 2020, according to ASSOCHAM-EY joint study.

At present, electric vehicle industry is at a nascent stage comprising 1% of the total vehicle sales and is dominated by two-wheelers (95%). The study suggests that EVs will be a stepping stone in designing an intelligent transport infrastructure in India.

The company has reportedly set the price of Comfort E-Auto at $2315 (INR 1.49 Lakhs). Powered by a lithium-ion battery, the electric three-wheeler vehicle, which offers central locking and GPS, boasts a mileage of 80 km while running at speeds of up to 30 km per hour.

Ayush Lohia, CEO of Lohia Auto, said, “After a significant success in keeping the electric vehicle moment alive, we are now geared up to take the brand to the next pedestal by adding more value to the products in terms of speed, power and reach.”

Gurugram-based Twenty Two Motors has launched its smart electric scooter, Flow, at the Auto Expo 2018. The company has priced Flow at $1161 (INR 74,740) and pre-bookings started this week.

Flow uses Artificial Intelligence and is connected to a cloud server which can suggest upcoming service requirements. While driving, it will also keep the driver updated on the touch dashboard display.

Parveen Kharb, CEO and Co-Founder, Twenty Two Motors said, “Flow, our first and flagship product, is way ahead of time, not just for the Indian market but also several international markets. Electric Mobility is the future of the world – a near future, not distant.”

More than 28 market-ready electric vehicles across different segments were showcased at the recently held Auto Expo in Greater Noida. Citing that as an indication of the Indian auto industry’s growing interest in EVs, the Society of Indian Automobile Manufacturers (SIAM) has once again urged the government to put a proper policy on electric vehicles in place.

Additionally, the industry body also called for a reduction in the GST rate on pure electric vehicles to 5% from the current 12%, as a way of facilitating the adoption of EVs in the country.

Elaborating further, SIAM Director General Vishnu Mathur said, “This year at the Auto Expo we have seen launch of market-ready electric vehicles, not just concepts, across various categories. This shows that the auto industry is getting ready very fast with EVs.”

“Now what is required is the infrastructure, especially for charging these EVs. Otherwise, we won’t get to where we want to with this technology,” Mathur added.

Despite the government’s aggressive push towards electric and zero-emission vehicles, the country’s fossil fuel consumption will continue to surge. As per predictions by the Ministry of Petroleum and Natural Gas’ Petroleum Planning and Analysis Cell, India’s gasoline and diesel consumption is poised to double by 2030.

The findings of the study have been confirmed by research and consultancy group Wood Mackenzie. According to Suresh Sivanandam, the Singapore-based Head of Asia refining research at Wood Mackenzie, electric vehicles will take time to become commercially viable and affordable. Furthermore, existing gasoline and diesel vehicles will remain roadworthy for at least another decade.

Although India needs to lower its dependence on environmentally-harmful fossil fuels, rushing towards electric vehicles without a proper charging or battery manufacturing infrastructure could mean that the country would soon be dependent on lithium imports, cautioned Toyota Kirloskar Vice-Chairman Vikram Kirloskar.

Adding that electric vehicles are not the right thing for India, Vikram said, “We make more than 500K electric vehicles in the world but I think it’s the wrong thing for India. Our long-term requirements are better fuel efficiency because we need to reduce oil imports, a cleaner environment and more safety. You can reduce energy consumption if the overall system is more efficient.”

“While India’s capacity to produce electricity from renewable sources is about 70%, actual production is about 90% coal-based. On that basis, EVs produce far more emissions than a hybrid,” he added.

According to Kirloskar, electric vehicles could have been a good option for India if the electricity was entirely generated from nuclear or hydropower. Keeping that in mind, he feels that hybrid vehicles are better suited for the Indian market.

Commenting on the development, Lithium Urban Technologies co-founder Sanjay Krishnan said, “We are in talks with key players to partner with. We can partner with anyone who has solutions to provide for charging.”

As stated by Sanjay, the startup has already signed an agreement with the government to provide 60 EV chargers for public use in Delhi-NCR region. As part of the project, Lithium will be getting financial assistance from the government.

To further bolster its offerings, the company is now looking to extend the infrastructure by working with private partners. It currently boasts a fleet of 400 electric cars, which have been largely sourced from Mahindra and Mahindra.

Catering to clients like Accenture, Adobe Systems and Unisys, it has so far built 70 charging stations in Bengaluru and 20 in Delhi. The company plans to spread its operations to Pune, Hyderabad, Chennai and Mumbai in the coming months. To that end, it is also preparing to add 500 fast electric chargers in these cities.

Germany-headquartered auto components giant Bosch has reportedly announced plans to develop electric mobility technologies in India. To that end, the company recently showcased a Bosch-powered electric car in the country.

In line with this goal, Bosch has already set up a new division called ‘Agile Project House’, in order to develop India-focussed electric mobility solutions.

Commenting on the development, Bosch MD Soumitra Bhattacharya stated, “Policy will evolve. You (industry) are not going to get everything on day one. We are moving ahead, we are showing live examples, demos. We are showing the way forward. I think that is more important.”

“Bosch strongly believes that its current and future portfolio of electro-mobility solutions will be one of the key contributing factors that lead to a dynamic ecosystem in the country,” he added.

In a bid to lower pollution levels and fossil fuel dependence, the Indian government has been exploring new models of transportation, including electric vehicles, hyperloop, and personal rapid transit.

These solutions will not only help reduce logistical bottleneck but will also boost exports, the government expects. As per reports, the Union Commerce Ministry is planning to evaluate the feasibility of these models, geared towards lowering the costs of freight transport to less than 10% of the GDP by 2022.

Currently, India’s logistics and transportation costs account for up to 14.4% of the GDP, compared to 8% in case of China. Commenting on the development, an official requesting anonymity said, “These are upcoming technologies and we need to know their potential and impact. For a 10-year plan, we need to see if the existing means of transport will suffice or not.”

“The private sector firm will use freight modelling tools to suggest interventions required on major routes and commodities to reduce logistics costs and improve efficiency,” the source added.

Global Auto Companies To Wait Until EV Policy Is In Place

Multiple international auto companies have said that they would wait until the Indian government has instituted a proper EV policy, before launching electric vehicles in the country. Renault India Ford Motor India, Hyundai Motor India, Fiat Chrysler and Mercedes Benz are reportedly some of the companies that have urged the government to frame a policy on electric vehicles.

During a media interaction last month, Hyundai MD and CEO Y. K. Koo said, “We need a clear picture from the government but we cannot wait. Still, we are waiting for a detailed roadmap to be proposed and developed by the NITI Aayog.”

In another interview, Ford Motor India MD Anurag Mehrotra stated, “If you look at the top five electric vehicle brands in the world, Ford is clearly one of them and globally, we have announced $4.5 Bn in electrification. Till such time we have a policy framework, it’s a little difficult. It is like shooting in the dark. So, you have to be careful that you get your policy and once it is done, we will be able to come back.”

Porsche And Audi Team Up To Build Platform For EVs

Germany-headquartered Porsche and Volkswagen-owned Audi have reportedly teamed up to develop a joint platform for electric vehicles. The technology, according to the companies, will help them significantly cut costs.

As part of the project, Audi is looking to hire 550 developers, while Porsche will be onboarding another 300 developers. Porsche CEO Oliver Blume added, “If both would act on their own, costs would be 30 percent higher.”

After proposing to curb funding on electric vehicles, the Chinese government is reportedly in the process of instituting a policy amendment, geared towards retaining local subsidies for EVs. The move is aimed at expediting the adoption of new-energy automobiles in China.

As per sources, the policy makers have taken this decision because they fear that discounting these incentives could adversely affect the country’s clean mobility sector.

As evident from the heightened enthusiasm about electric vehicles at the Auto Expo 2018, automotive companies around the world, including giants like Toyota, Maruti Suzuki, Mahindra and Mahindra, Renault and Nissan, are slowly shifting to electric mobility solutions of the future.

In India, the government has finally realised the potential of the necessity of green mobility technologies like electric vehicles. With a fresh allocation of $40.5 Mn in the Union Budget 2018 towards the development of electric and hybrid vehicles, how the domestic market benefit from the additional funds and reforms remains to be seen.

If successful, the shift to electric vehicles could potentially help India save up to $300 Bn (INR 20 Lakh Cr) in oil imports and nearly 1 gigatonne of carbon dioxide emissions by 2030, as per a recent report by FICCI and Rocky Mountain Institute.