Travel Nonstop With Electric Cars: Tesla Is Building A New Battery Swapping Robot That Changes A Battery In 15 Minutes

Travel Nonstop With Electric Cars: Tesla Is Building A New Battery Swapping Robot That Changes A Battery In 15 Minutes Tesla is aiming to make almost nonstop travel during long road trips possible with electric cars. The company has filed a patent for a new battery swapping robot that can lift a vehicle and change its battery pack for a new one in just 15 minutes. This would slash the time taken to charge electric cars fully.

Currently, it takes a little over an hour to fully charge a Tesla car at one of the firm’s Supercharging stations. By switching out the battery pack, however, drivers could find themselves back on the road much sooner.

Inside The Battery Swapping Robot

The battery swapping system will rely on a mechanical lift that can raise the vehicle to a predetermined height. Once the car has been hoisted into the air, the system removes the battery pack from underneath, and replaces it with a new one. The system could work autonomously or with the help of human operators. So after the lift is in the right position to support the battery pack, a technician could use a device to remove the bolts that keep it in place. Or, this same task could instead be done by automated machinery mounted onto the rig. 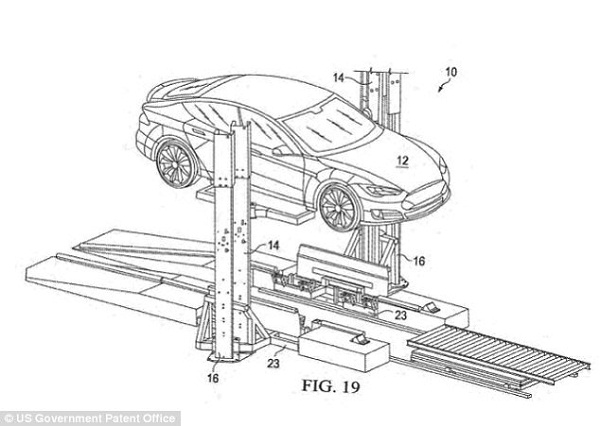 According to the patent, the rig could even be installed on a trailer with ramps built on either side, allowing cars to drive right in and out. 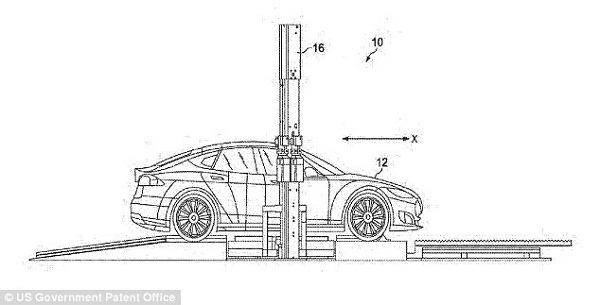 The patent explains. ‘Because the process of charging such cells usually takes some amount of time, some vehicles are designed so that the battery can be replaced with another battery, to replenish power in the vehicle or to address malfunction in the current battery.’

The battery swapping system described in the patent could be used for Tesla’s Model S and Model X vehicles, thus allowing for a more rapid way of replenishing the electric energy for the electric car.

Tesla And Its Experiments For A Long Drive Electric Car

However this is not Tesla’s first attempt to make the charging process faster and more accessible. In a 2013 demonstration, Elon Musk showed off technology that could swap out Model S battery packs in just 90 seconds. But that seemed to be shelved as the Supercharger network started rolling out. Last week, the firm revealed its Supercharger network would be expanding to city centres and downtown areas, starting with Chicago and Boston.

The existence of the patent for battery swapping system doesn’t mean Tesla has plans to work on the project, however it shows that Tesla is considering ways to keep electric cars for vehicles on the road without spending much time at the Supercharger station. Also, it could also be helpful for Tesla’s new commercial truck Tesla Semi which is to be launched next month. The vehicle which is expected to compete with conventional diesel vehicles which can travel up to 1,000 miles on a single tank of fuel could benefit from being able to have its battery exchanged mid-trip.