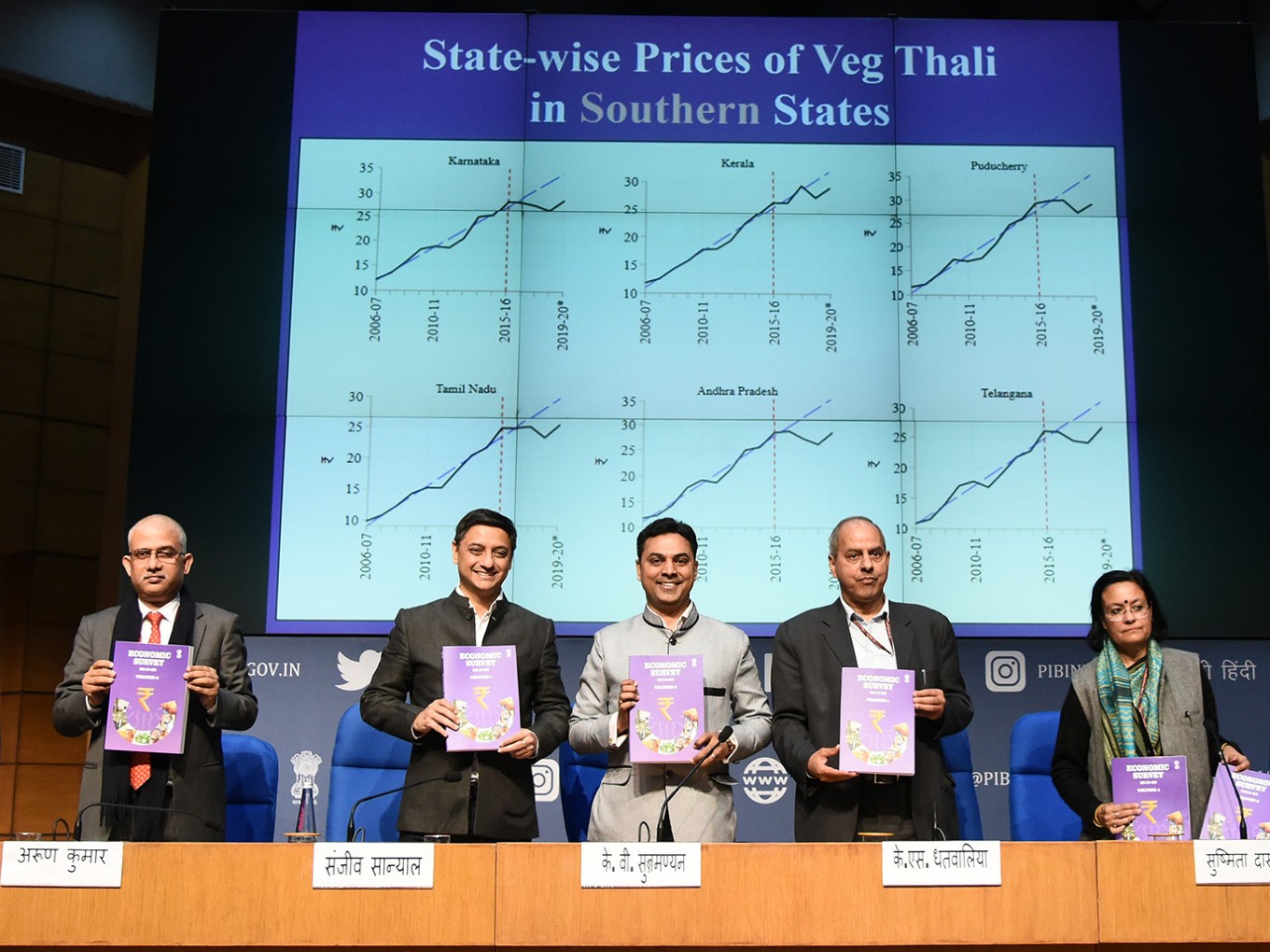 Inaugurating the Budget Session of the Parliament, as the President of India Ram Nath Kovind applauded the Indian government for its digital India, Startup India initiatives, RuPay and UPI transactions, GeM and for improving ease of doing business, finance minister Nirmala Sitharaman tabled the Economic Survey 2019-2020 in Parliament.

The Survey has come up with “Thalinomics: the Economics of a Plate of Food in India” quantifying what a common person pays for a thali across India. And, by the way, besides quoting Bhagavad Gita, Rig Veda, Aristotle, Confucius and Adam Smith, the Economic Survey also relies on Wikipedia as its source for some of the data.

Interestingly, it circumvents the ‘Truth or Dare’ category questions of economic slowdown, joblessness, and falling exports, GDP growth and lowest consumer spending, and blames global scenario in most of these cases.

For instance, take these:

Despite acknowledging the fact separately that Bangladesh, Vietnam and China are able to progress in the value chain by increasing their competitiveness in the international market by improving their delivery time and domestic production capacity, when it comes India’s exports, it marks,

“It seems like we have hit a trough (in the business cycle) now and there should be an uptick.” – CEA Subramanian

Bad days are over, the GDP growth rate will only improve now, at least if the survey is to be believed. On a net assessment of both the downside and upside risks, India’s GDP growth is expected to grow in the range of 6.0 to 6.5% in 2020-21 and if the government uses its strong mandate to deliver expeditiously on reforms, it will enable the economy to strongly rebound in 2020-21.

On former CEA Arvind Subramanian and many other economists’ concerns over-inflating the GDP growth rate, the survey says

“Concerns of a misestimated Indian GDP are unsubstantiated by the data and are thus unfounded.”

India And Entrepreneurship In The Global Arena

Terming better education, infrastructure, EoDB and Startup India initiative as the key reasons behind India capturing the third position globally in terms of the number of new firms created. Citing World Bank data, the survey states that new firm creation has gone up dramatically in India since 2014. While the number of new firms in the formal sector grew at a cumulative annual growth rate of 3.8% from 2006-2014, the growth rate from 2014 to 2018 has been 12.2%.

The entrepreneurial activity in the manufacturing sector is highest in Gujarat, Meghalaya, Puducherry, Punjab and Rajasthan. Measures to increase the literacy levels rapidly through the institution of more schools and colleges will spur entrepreneurship and consequently local wealth creation, the survey observed.

According to the report, literacy and education in districts foster local entrepreneurship significantly. For instance, the eastern part of India has the lowest literacy rate of about 59.6% according to the census of 2011. This is also the region in which new firm formation is the lowest. In fact, the impact of literacy on entrepreneurship is most pronounced when it is above 70%.

The #EconomicSurvey 2019-20 focuses on wealth-creation for 130 crore Indians. It outlines a multi-faceted strategy to achieve a $5 trillion economy through enterprise, exports, ease of doing business and more. – Narendra Modi

Bringing an openness in the market leads to wealth creation and this, in turn, helps boost the economic activity through increased investments. It also cites the importance of increasing the efficiency of public sector banks which have captured 70% of the Indian banking space.

The survey identifies several levers for boosting wealth creation, which are:

MSME is an important sector in terms of entrepreneurship and generates employment opportunities at lower capital cost. The ES lists a slew of government initiatives that ensure better credit flow, technology up-gradation, ease of doing business and market access.

Among these are: sanctioning 1,59,422 loans of worth INR 49,330 Cr, the interest subvention of 2% for all GST registered MSMEs on incremental credit up to INR1 Cr, making CPSUs to compulsorily buy at least 25% of their total purchases from MSMEs. Out of the 25% procurement mandated from MSMEs, 3% is reserved for women entrepreneurs.

As union minister for commerce and industry Piyush Goyal had earlier asked economists to refrain from mathematics mistakenly citing a wrong example that mathematics didn’t help Albert Einstein discover gravity, the Economic Survey, instead of bringing clarity on the gravity of current scenario of joblessness, focusses on jobs that are created and that might be created in future. By not addressing the economic slowdown, joblessness, and falling exports, GDP growth and lowest consumer spending head-on, the Economic Survey 2019-2020 seems to have skipped a beat.