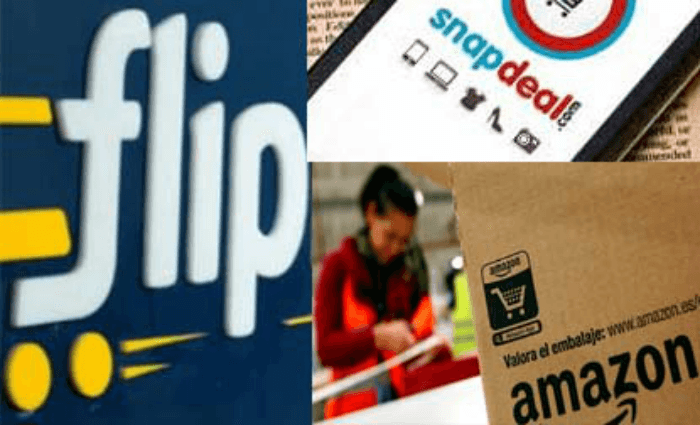 The end of a year is always the time of pontification and reflection of the hits and misses of that year. Be it an individual or a startup or a conglomerate, all will take time to sit back and analyse where they scored, where they didn’t; what worked for them and what didn’t; what was a good strategy and what was a bad experience; where did money come from and where did it miraculously disappear; what needs to be carried forward to the next year and what needs to be discarded; and which approaches will work for the next year’s goals and which won’t.

For all this reflection to happen, one needs to have an absolute record of things that happened- a personal tracker of all transactions. Something like Beewise – a personal finance app which helps users manage their personal expenses.

Besides helping users manage their finances, Beewise has also analysed the 1.5 Mn transactions worth INR 600 Cr so far carried out by their 30,000 users in the last six months. Out of these, 100,0000 transactions were for Amazon, Flipkart, and Snapdeal. The users of Beewise are mainly from tier 1 cities across India within the age group of 22-32. This goldmine of data has revealed some interesting insights on online shopping, which is currently the battleground of three major players-Amazon, Flipkart and Snapdeal. The data points out to some clear trends and clear winners among these three behemoths.

Let’s take a closer look at what the numbers have shown and who is leading the race in online shopping.

Who Is Winning Month On Month?

One look at the monthly sales trends graph points out to the fact that in the May to November period, Amazon clocked the maximum no of transactions, peaking in October. Flipkart followed next, peaking again in October, while Snapdeal came in third. Clearly, the festive season time augured well for all the three competitors with October being their busiest month. 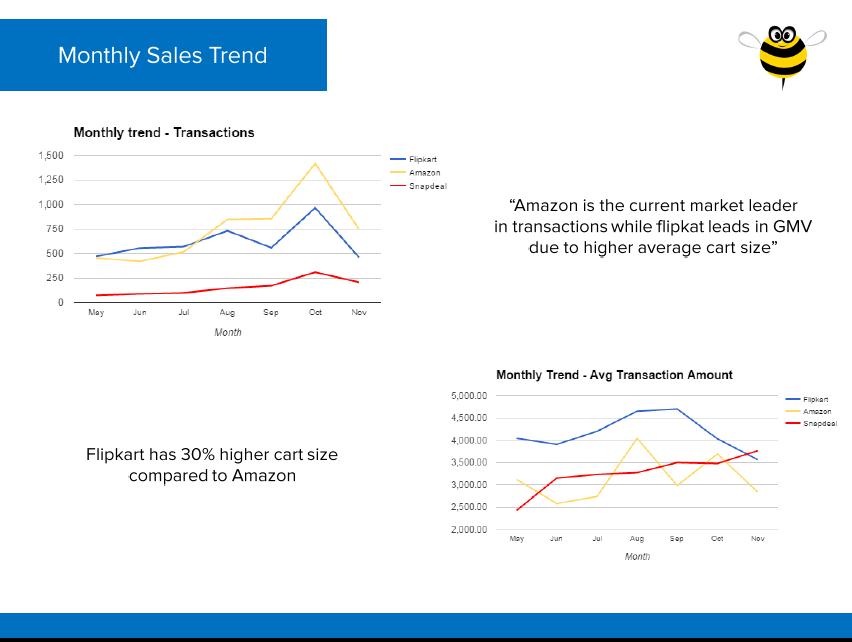 However, Flipkart stole the march over Amazon as far as the GMV of these transactions was concerned on account of its higher cart size. Flipkart reported over a 30% higher cart size compared to Amazon in these six months, while Snapdeal trailed both of them again in GMV as well.

During this six month period, all the three competitors came up with a lot of offers targeted at the festive season. So while Flipkart rolled out its Big Billion Week, Amazon also lured customers through its festive sales. So did Snapdeal with its Diwali sales in October which saw the ecommerce player hitting app downloads of 5 Mn during the same time.  Consequently, the last two weeks in October preceding Diwali were the busiest weeks for all the three players. 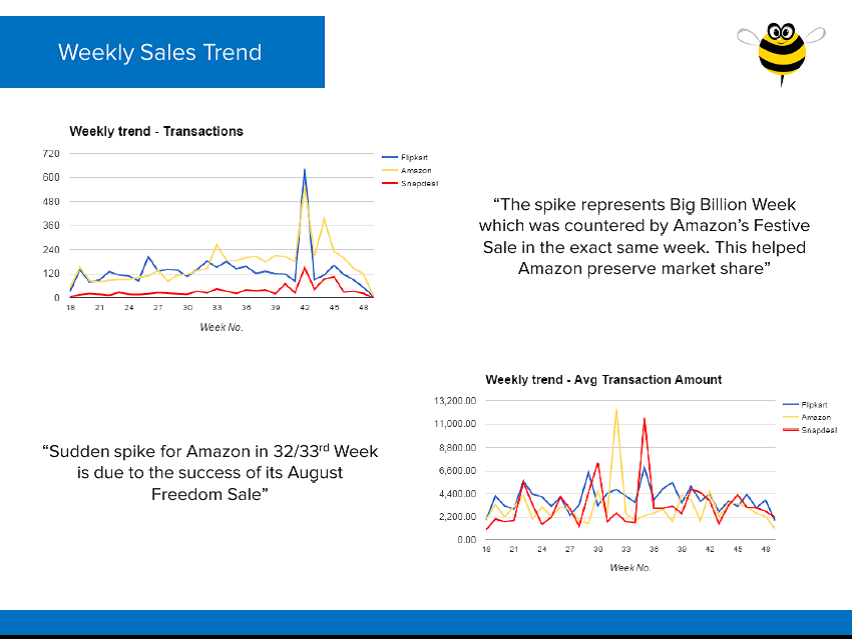 Similarly, Amazon also reported a spike in its average transaction amount during the 32nd/33rd week due to the success of its Freedom Sale in August.

If one looks at the data for monthly, weekly and daily trends, some interesting insights come to the fore. Such as most of the transactions happen during the middle of the month, which kind of makes sense, as people have by far received their salaries by the first two weeks. 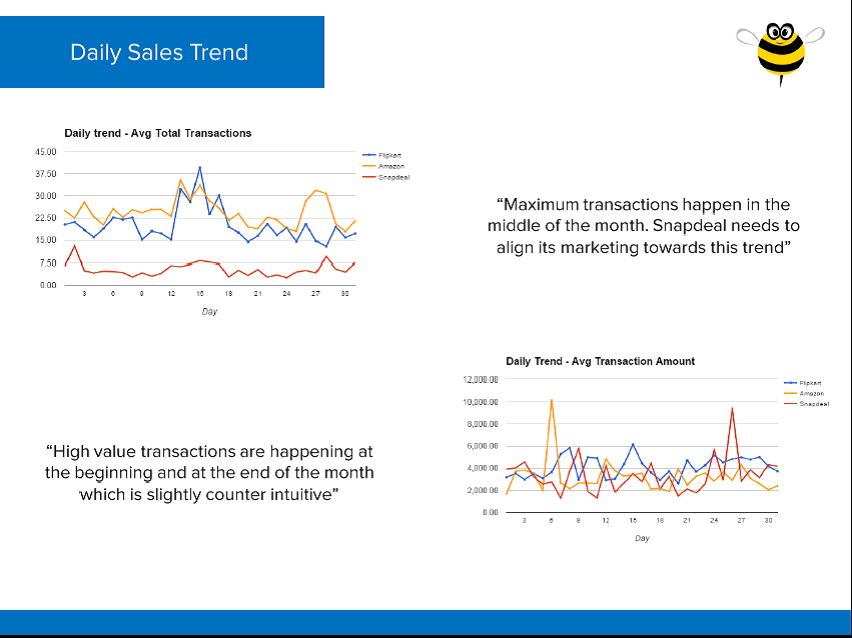 However, when transaction sizes were compared, it was revealed that many high value transactions were happening in the beginning and the end of the month, which could imply that people were purchasing high ticket items either in the beginning itself when they are loaded with cash or towards the end when they have saved up after their monthly expenses.

Sundays Are Not Fun-days For Online Shopping!

An interesting trend that was observed in the case of all the three players was that their weekly transactions trailed off during the weekend. A possible reason for this is as weekends are the time people step out and indulge in offline shopping, hence, the slump in online shopping. As we go forward and compare data, this is substantiated by the fact that offline shopping still forms the major chunk of people’s expenses, even though matter though online shopping is gaining traction rapidly. 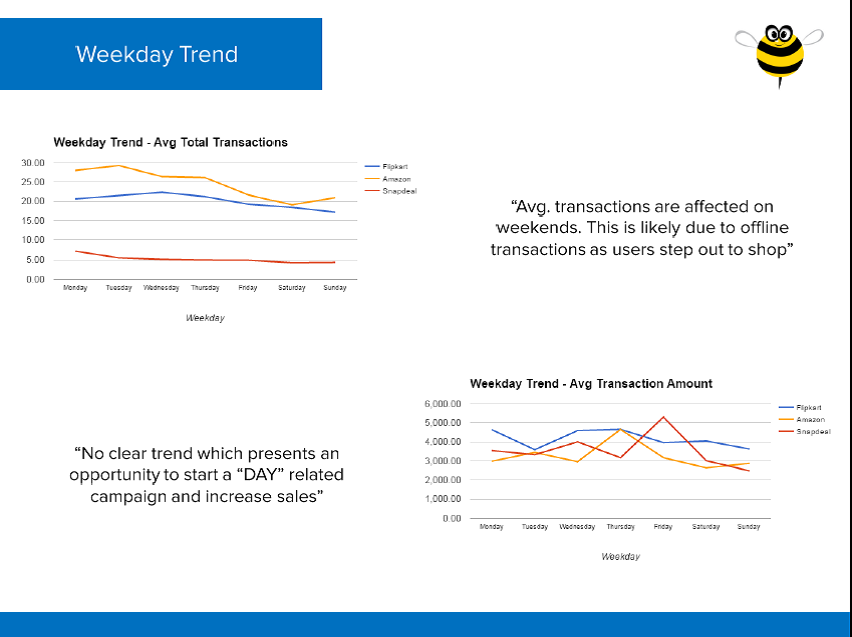 Another interesting fact that came to light when weekly transaction amount data was analysed, it was found that there was no particular day which registered maximum sales for all three. This means that players can probably leverage this opportunity to push sales by starting a campaign related to a particular day in a week.

Post Lunch And After Work Hours Are Happy Hours For Online Shopping!

Perhaps the most interesting trend that was pointed out by the data was that shopping peaked between 12-4 PM in the day and during 8 PM-11PM in the evening. This clearly shows that most people are shopping after lunch in their office hours and after work gets over i.e. from 8 PM to 11 PM. It is understandable that online shopping falls down from 4 PM to 8 PM as people start winding up work and commuting back to home. 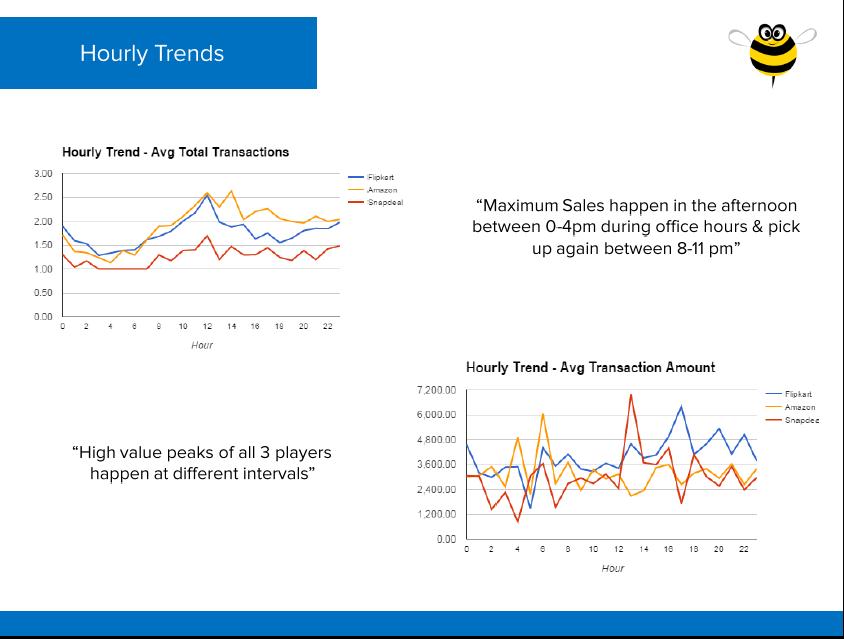 The data points out to clear trends as far as competitive share of the market is concerned. Based on these 100,000 transactions, Flipkart garnered the biggest percentage of all, with 46.3% of transactions to its credit. Amazon follows it closely at 44.3% while Snapdeal clearly has a lot of catching up to with these two as it has to contend with just 9.4% market share. 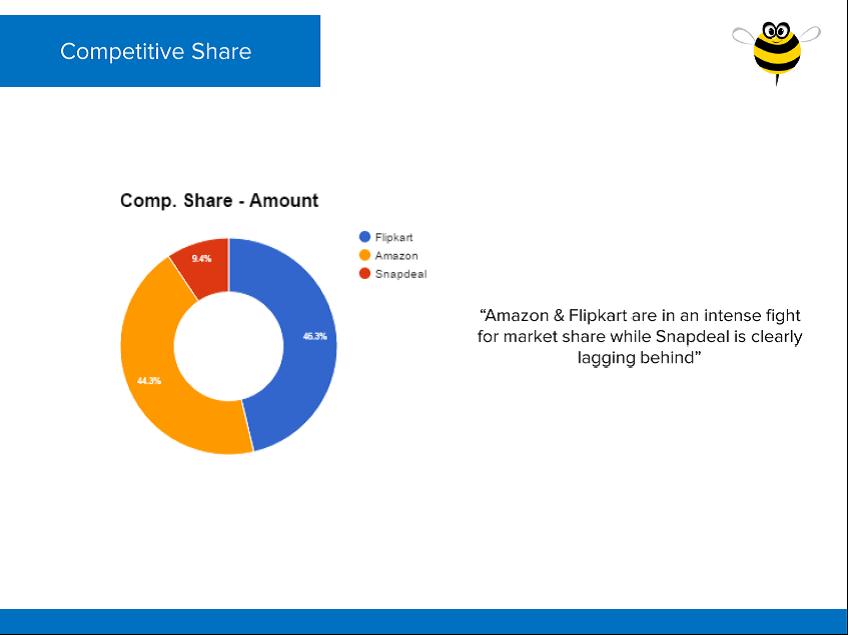 However when contrasted with the overall market including offline merchants, online shopping turned out to be still a minority contender. All of them had only a single digit share when compared with the more than 80% share held by offline merchants. Clearly, online has a long way to go to become a solid competitor to the offline retail. 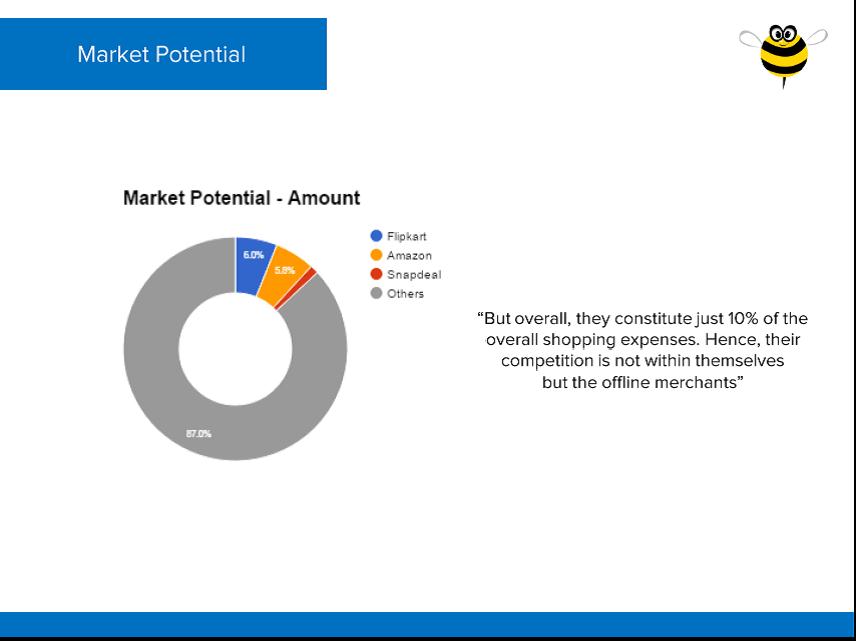 And The Player With The Most Loyal Customers is…!

Loyalty and repeat metrics is an important parameter for any ecommerce player. This data gave interesting insights on who’s winning the loyalty and repeat customer war. Amazon again headed the list, with 11% of its loyal customers contributing to almost 33% of its GMV while Flipkart came second with 9% of its loyal customers constituting for 30% of its GMV.

Meanwhile, Snapdeal’s 3% loyal users contributed to almost 10% of its GMV. 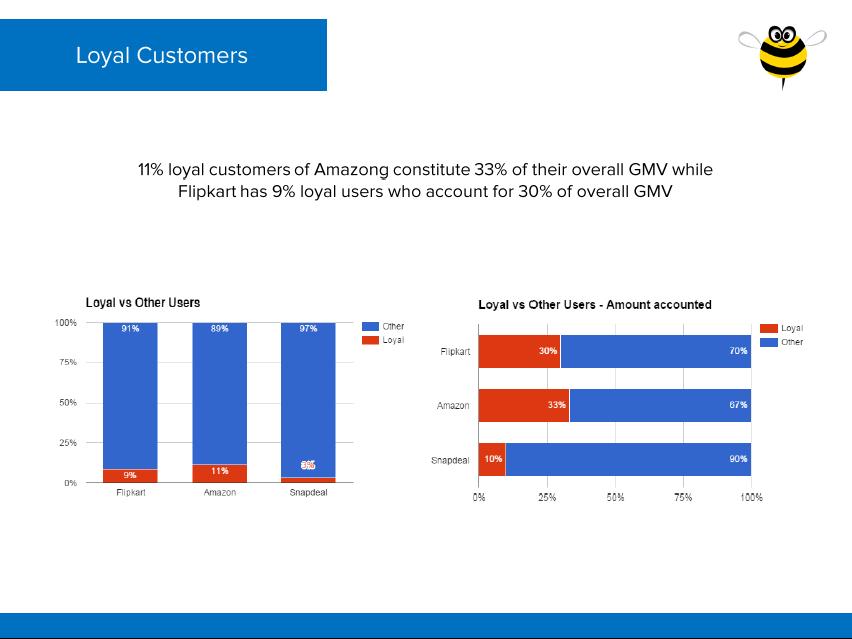 Similarly, when it came to repeat transactions, Amazon and Flipkart had a similar transaction funnel with repeat customers, but Snapdeal clearly lacks that kind of hold on its customers. 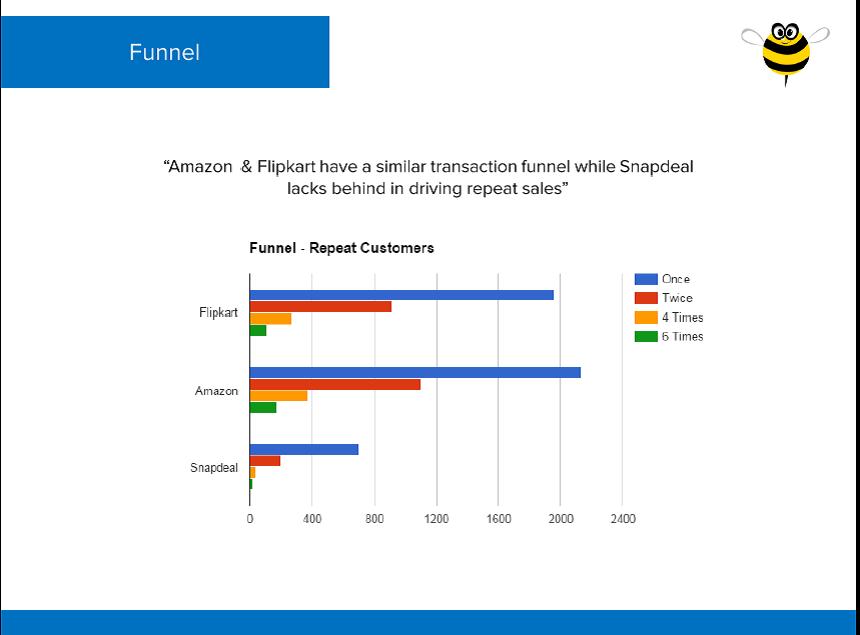 In fact, when customer distribution across the three brands was analysed, it came to light that about 50% of customers of Amazon and Flipkart are common while 6% of the customers have used all the three brands at least once. Also, while 50% of Amazon customers use only Amazon, for Flipkart the same no is 46.5%. For Snapdeal, 30% of its customers are exclusive. 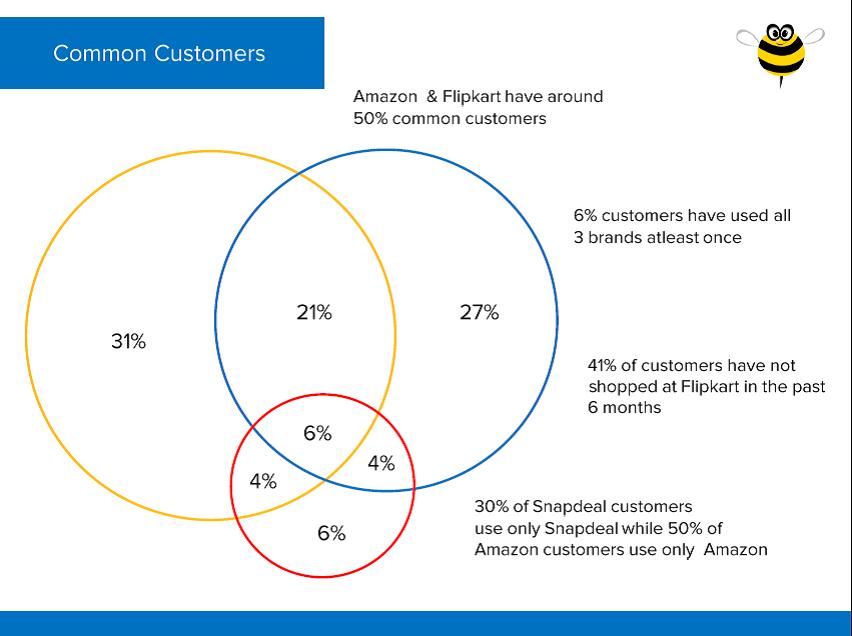 The trends clearly point out that while Flipkart and Amazon are battling intensely for the number one spot, Snapdeal seems to be trailing behind them. It will be interesting to watch how the ecommerce war heats up as yet another New Year approaches.