Five Years, 124 Ecommerce Startups: How Ecommerce In Indonesia Has Emerged As A Disruptive Economic Force

Five Years, 124 Ecommerce Startups: How Ecommerce In Indonesia Has Emerged As A Disruptive Economic Force

Ecommerce has been around for almost 40 years now and needless to say is thriving – with Amazon and Alibaba having become household names. This global trend that came into being in 1982, has taken the entire world by storm through its charm, and now Southeast Asian countries like Indonesia, Malaysia, Philippines, and Vietnam have also opened their arms to the idea of buying and selling at the ease of a click. It would be an understatement to say that it has revolutionised the way people view and experience shopping.

We have previously discussed Indonesia’s most funded and emerging startups that are ripe for disrupting its economy and ecommerce is a prominent contributor to this change.

The world of retail is undergoing an unprecedented wave of innovation. As per this Google consumer survey, an estimated 7.4 Mn people shopped online in 2015 in the archipelago, grossing sales of around $3.6 Bn.

Most of the startups that are attracting venture capitalists’ attention belong to the ecommerce sector, as local Indonesian players dominate the market, especially in the niche segments. The potential of ecommerce in Indonesia has already tempted many players, both foreign and local, to enter the market.

The global ecommerce trends are primarily divided into two models:

The segment is further fragmented in diverse, yet related categories including B2C, C2C, classifieds, and brand-specific websites. What is interesting to note is that all of these facets of the ecommerce (used here as an umbrella term) have already made their way in Indonesia’s startup ecosystem.

Indonesia’s ecommerce landscape is essentially an amalgamation of the direct retail and a very bazaar-esque(local market) like structure, where the market patterns are affected by local nuances and consumer culture. Indonesia’s island geography makes for one peculiar, fragmented, yet one of the most lucrative markets for ecommerce to set up its house. 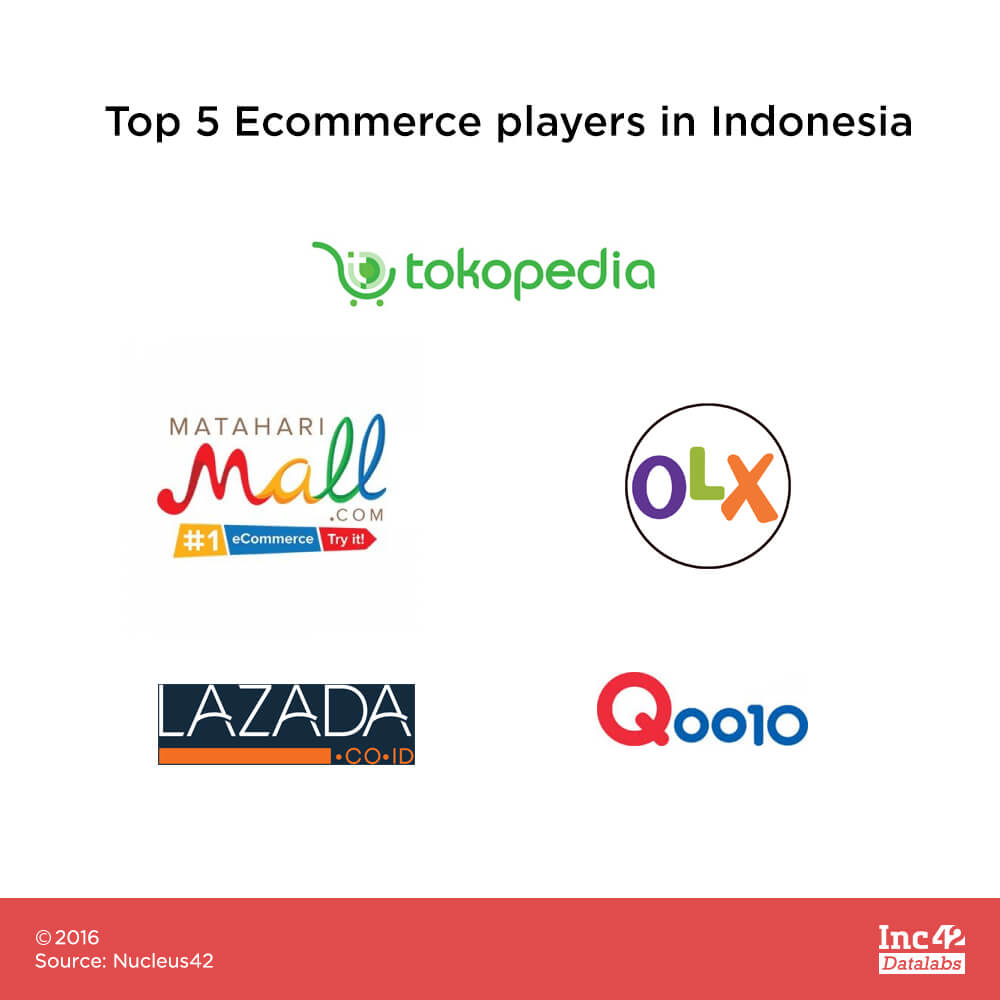 When ecommerce entered Indonesia in 2011, the sector had already established a model globally and was progressing towards its next phase, which brought about an increased trend of omnichannel networks. Indonesia’s entrepreneurial ecosystem adopted the already set practices and moulded them as per the customer base and its needs. The Indonesian consumer was becoming more discerning, looking for more convenient ways to shop and engage with brands in the online space – and this is where startups capitalised.

The major players in Indonesia’s ecommerce segment include Tokopedia, Matahari Mall, Lazada, Qoo10, and OLX. So much so, that the combined funding raised by these startups amounts to around $870 Mn.

With a global increase in smartphone usage, the country’s mobile-first economy offers elevated opportunities for growth, as data shows that 64% of Indonesia’s 100 Mn internet users prefer mobile over desktops for shopping. Taking advantage of this, small entrepreneurs, as well as tech-savvy startups and capital enterprises, are shifting towards easy-to-use mobile sites, that will essentially be the key to driving conversions.

What drives Indonesia’s inclination towards a very mobile-first ecommerce trend is the ability to discover and buy products in real-time conveniently at the palm of your hand.

Unburdened by a desktop Internet legacy and driven by ever lowering costs of smartphones, cell phone adoption in Indonesia has accelerated to a point that Lazada now gets more than 50% of its traffic from mobile channels. This is perhaps also the reason of the ‘click-and-collect’-based MatahariMall’s immense popularity and success in the country, the first online-to-offline ecommerce site in Southeast Asia.

The real-time shopping experience facilitated by mobile-first ecommerce platforms in Indonesia then becomes the key driving factor for the success of ventures like Tokopedia. It is Indonesia’s industry-first C2C marketplace and claims to be the fastest-growing ecommerce marketplace. It connects consumers with small retailers and individual sellers and acts as an intermediary platform for their transactions to facilitate.

As per 2015 Google internal data for Indonesia, the most searched queries by Indonesian online shoppers included groceries, skincare and makeup products, apparels, and real estate. On the other hand, the least searched for items included smartphones, electronics, and recreational activities. This is a major shift from the global trends where electronics and smartphones are generally the key categories of online marketplaces, like fellow Asian country India.

From Fragmentation To Consolidation

Southeast Asia is at the crossroads of two major socio-technical forces that are creating a perfect storm: the accelerated development of the startup ecosystem and proliferation of unique and Asia-specific business models.

This is where the Asian culture and ecosystem meets local ingenuity and entrepreneurship, where local entrepreneurs are inclining towards ecommerce as a source of boosting revenues. This phenomenon is further leading towards consolidation of brands and local businesses under larger ventures in search of profitable revenues.

This has given rise to a new kind of ‘Social Ecommerce’ in Indonesia, where players like Lazada and Tokopedia are marketing products based on local cultural factors, with high mobile penetration and content creation concentrated on social media platforms such as Facebook and Instagram, where transactions are completed via personal messaging and chats. This is a step, if not necessarily ahead, but in a very different direction from players like Amazon and Tmall.

Enabling ecommerce through buy buttons may be a necessity, and even a survival mechanism in the Southeast Asian market, marking such businesses for potential future consolidation. This is opined from the fact that successful marketplaces in the country have run commerce-driven, not ad-driven businesses.

No Saturation Point In Sight For Now

With the perfect match of supply and demand in Southeast Asia and the plethora of established ecommerce platforms available, even in an emerging market like Indonesia, ecommerce as a sector is expected to rise and thrive in the coming year as well.

Indonesia started with a clean slate, allowing it to be in a unique position to experiment and develop new business models on mobile, primarily driven by commerce.

With smaller emerging players like Orami, Franc Nobel, Sale Stock, Pamelo Fashion et. all aiming at a vertical integration of design, manufacturing, and supply chain, the innovative consumer-driven business models in the ecommerce segment, the market could potentially hit $130 billion by 2020, with an estimated annual growth rate of 50% and strong mobile-first initiatives.