Drones Will Take Agriculture To The Next Level, Empower Farmers: PM Modi 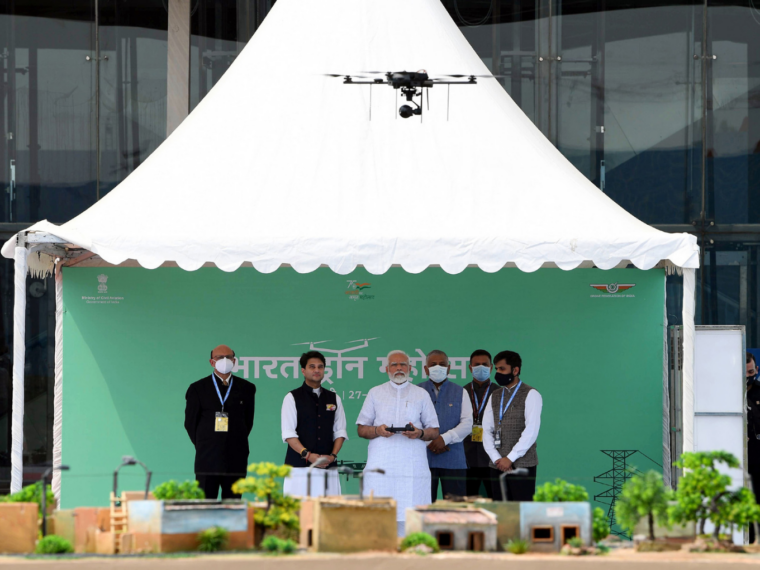 Drone technology will play a major role in empowering farmers and modernising their lives: PM Modi

Prime Minister Narendra Modi on Friday (May 27) said that drones will emerge as a  ‘gamechanger’ in the agriculture sector and take it to the next level.

Modi underscored the importance of drones in sectors such as agriculture while inaugurating the Bharat Drone Mahotsav 2022. He added that the use of deeptech technology is bound to increase in the coming days.

Addressing the gathering, Modi asserted that drone technology will play a major role in empowering farmers and modernising their lives.

”As villages are witnessing the arrival of optical fibre and digital technology, the agriculture work is still being conducted in old ways, leading to hassles, low productivity and wastage,” the prime minister said.

Drones have emerged as an effective tool to tackle all these issues, he added.

The Much Touted ‘Drone Shakti’

Usage of drones in agriculture has emerged as one of the cornerstones of government policy in  the sector. The impetus came after Finance Minister Nirmala Sitharaman, in her Budget speech, called for leveraging drone power or Drone Shakti. She called on Indian entrepreneurs to set up more drone-based startups.

Earlier this month, the Centre also announced the extension of financial assistance of 100% cost of drones and contingent expenditure to farm machinery training and testing institutes such as  the Indian Council of Agricultural Research (ICAR), state agricultural universities (SAUs), among others.

The Agriculture Ministry had issued guidelines for financial assistance in January this year to spur the usage of drones in the sector.

In March, the Directorate General of Civil Aviation (DGCA), along with the Agriculture Ministry and the Central Insecticide Board and Registration Committee (CIBRC), announced that they will fast track applications pertaining to adoption of drones for purposes such as crop health monitoring and spraying of soil nutrients.

The Centre has also announced a slew of schemes to increase drone usage, including the INR 120 Cr Production Linked Incentive (PLI) scheme to promote manufacturing of drones in the country. Domestic startups such as Dhaksha Unmanned Systems, ideaForge Technology, as well as arms of big conglomerates such as Adani-Elbit Advanced Systems, were among the first provisional list of beneficiaries of the scheme released in April.

The government has also removed the requirement of having a ‘pilot licence’ to fly drones through an amendment in Drones Rules, 2021 in February this year.

The Centre has been pushing for deployment of drones in the agriculture sector for a slew of reasons. Drone usage can address the manpower shortage in the sector during the peak season. In addition, drones can also be utilised for crop assessment and spraying pesticide which can help save additional resources for small and marginal farmers.

A 2021 BIS Research estimated the global drone market to reach $28.47 Bn in FY22, with India likely to account for a meagre 4.25% share. According to another report, the global drone services market size is expected to grow to $63.6 Bn by 2025.