SIDBI Has Recently Allocated $31.5 Mn To Three AIFs, Which Raises The Total Number Of AIFs To 20

With the onset of 2018, the Department of Industrial Policy and Promotion has brought new hope for Indian startups. As revealed in a recent tweet of DIPP Secretary Ramesh Abhishek, SIDBI can now commit an additional $252 Mn (INR 1600 Cr) to AIFs from $1.5 Bn (INR 10000 Cr) Fund Of Funds by March 2018. 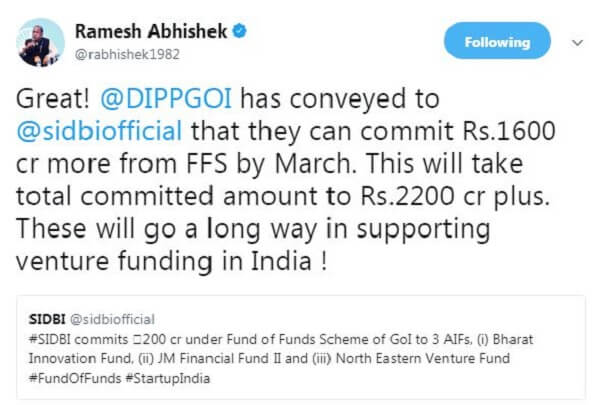 According to October 2017 status report by DIPP on the Startup India website, about $92 Mn (INR 605.7 Cr) from the fund has already been released to SIDBI, and 75 startups have received funding from 17 AIFs so far. The entire Fund of Funds corpus has been earmarked to get allocated across two finance commission cycles (2015-2020 & 2021-2025).

Here is the list of AIFs who has been allotted funds so far by SIDBI under Fund of Funds scheme.

As one can observe, while Chiratae Trust has been sanctioned the maximum corpus, Kae Capital Fund II has made maximum investments in startups as of September 2017.

As per Inc42 Data Labs analysis, so far the information of 70 startups funded by AIFs is available. Of these only 62 are active, while the rest have been either shut down or acquired.

In terms of sector, ecommerce grabbed the majority 18.57% funding from SIDBI led Fund of Funds for startups. Enterprise application and fintech startups closely followed with 15.71% and 12.86% funding respectively.

Also, the majority of startups selected for funding under Fund of Funds are just three years old, having been launched in 2015.

Although it has been over three years since its launch, the $1.5 Bn Fund of Funds has not been able to reach to a large pool of startups. But, like they say, it takes time for a plant to enhance its roots. It can be believed that in the coming years, the investment from SIDBI led AIFs will move above the existing growth curve.