The Digital India Dream – Is the Govt On the Right Track?

The Digital India Dream – Is the Govt On the Right Track? 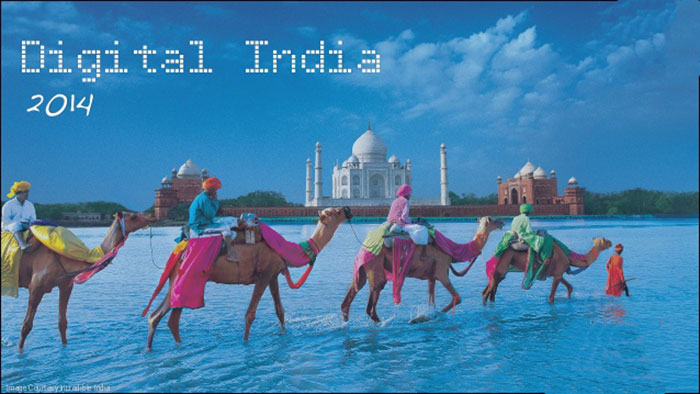 The Narendra Modi-led Bhartiya Janta Party government has assured to make India a Digital nation by year 2019. Post the Prime Ministerial oath ceremony, Modi has decided to bridge the gap between the government and the people through the digital platform. For this the government of India launched a programme called “Digital India.”

Though the target will be achieved by 2019, the word “Digital” has become so common that every person is talking about it. Even the rickshaw puller is talking about 3G and 4G thanks to cheap Chinese smartphones and one of the biggest scams of India, the 2G Ghotala!

Now, let’s find, what exactly is Digital India’s mission and what changes will it bring in the lives of the common people.

The aim of Digital India is to transform the country into a digitally empowered society and knowledge economy. This mission is transformational in nature and would ensure that government services are available to citizens electronically with minimum paperwork.

It has three key objectives. First, to create a digital infrastructure for providing to citizens services like digital identity, mobile phone and a bank account. Second, to service and govern a real-time online financial transaction platform. And third is to digitize all documents and records of the citizens and make them available on a real-time basis.

In order to make this digital dream a reality, government has started working on it. Let’s have a look, what has been done till now for this mission.

On July 26, 2014, Prime Minister Modi launched MyGov, a platform that empowers the citizens of India to contribute towards Surajya. Speaking on the occasion, which also marked the completion of sixty days of the new Government, the Prime Minister said the success of democracy is impossible without participation of the people. E-governance is the need of the time.

In a country like India, government employees are known for their lazy work styles. To overcome this, the government has launched a new initiative which will allow anyone to track the employee attendance numbers in government organisations.

A new Biometric Attendance System (BAS) has been installed for government employees who will make use of the UIDAI’s Aadhaar card and the attendance data will be visible on the portal attendance.gov.in.

Earlier, there was nothing like trying to reserve a ticket for travel on Indian Railways. The experience was almost painful for everyone (except a few lucky ones!) However, the newly launched next-generation e-ticketing system that features an enhanced booking capacity of 7,200 tickets per minute is faster and easier to use than ever before. Karnataka has launched India’s first mobile governance platform. With the help of this newly launched app around 4,500 services can be availed. This mobile governance initiative will allow people to access services like payment of utility bills and property tax, booking railway tickets, applying for driving licences and filing income-tax returns.

Just after forming the government, Modi’s National Democratic Alliance (NDA) government had “suggested” all ministers and the ministries to join social media platforms like Twitter, Facebook, YouTube and blogs to “directly communicate” with people.

The Ministry of Tourism in India has come out with an app titled ‘Incredible India’ for International and domestic tourists to access and discover information about Indian tourism more easily.

With an aim to bridge the digital divide and enhance the reach of Internet to remote villages, communications, government has launched domain name ‘.bharat’, covering eight languages including Hindi, Konkani and Marathi. Users can also secure domain names in Boro, Dogri, Maithili, Nepali and Sindhi-Devanagari.

The government is expecting a big impact by this move. By 2019, there will be broadband in 2.5 lakh villages and universal phone connectivity, net zero imports by 2020, 400,000 Public Internet Access Points, Wi-fi in 2.5 lakh schools, all universities; Public wi-fi hotspots for citizens, e-Governance & e-Services across government and Digitally empowered citizens – public cloud, internet access. This will also help in digital inclusion by which 1.7 Cr trained manpower will be required for IT, Telecom and Electronics.

The overall cost of Digital India programme is INR 100,000 Cr. for the current schemes and additional INR 13,000 Cr. for the new schemes and activities. Now the million dollar question is, from where to get the funding? Not to worry, the source of funding for most of the e-Governance projects at present is through budgetary provisions of respective Ministries/ Departments in the Central or State governments. Also giant ecommerce companies are expected to facilitate Digital India project.

The Digital India (DI) initiative is a promising initiative of the Indian government. It is not free from challenges and legal hurdles. Some believe that DI cannot be successful till mandatory e-governance services in India are introduced. This seems to be logical as well as when even the National e-Governance Plan of India has not been implemented properly, expecting successful implementation of Digital India might be hoping for too much.

However, Digital India dream is clearly no magic broom and there is a lot to clean up and repair before we can aim for the skies. On one side the government is talking about digital space and on the other hand, transparent rules are missing for ecommerce firms, which can allow them to work freely.

Therefore, in order to make India as digitally equipped, the government must look at the bigger picture where freedom and safety can go hand in hand.