Digital Economy Needs To Be Stickier For Reasons Of Convenience And Efficiency, Not Discounts: Arvind Gupta, Head Of IT Cell, BJP

Digital Economy Needs To Be Stickier For Reasons Of Convenience And Efficiency, Not Discounts: Arvind Gupta, Head Of IT Cell, BJP Close on the heels of the demonetisation drive, the 2016 Prabodhan: The Leaders’ Conclave concluded on November 10, 2016 in New Delhi. Eminent business leaders, thinkers, and economists spoke about what the recalibrated relationship (Brexit) between the EU and the UK could mean for India and its impact on different sectors, especially fintech.

Of particular interest in the current scenario was the session titled “The impact of fintech” which threw light on how fintech innovations in Europe and India impact not only the financial sectors directly, but also consumer behaviour and the way businesses operate across sectors. The panelists included Rajesh Agrawal, Deputy Mayor of London, Chair of London and Partners; Richard Hird, Chief Commercial Officer, De La Rue; Leo Puri, Managing Director at UTI Asset Management Company. The session was moderated by Arvind Gupta, Head of Information Technology Cell, Bharatiya Janata Party (BJP).

The discussion focussed on what fintech operators and businesses that are being reshaped by fintech in Europe and India can learn from each other and the collaboration opportunities between them. 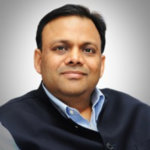 Arvind Gupta threw light on how countries like India are leapfrogging, not one but maybe two or three generations in the use of technology in the financial sector. He also raised the question of adoption of digital economy as merely a convenience issue, or if it is driven by discounting – where people are buying products online just because it’s cheaper online than offline.

Gupta further questioned if it’s a temporary phenomenon or driven by capital dumping? In conclusion, he stressed the fact that one would like the digital economy to be stickier because of the right reasons, which are convenience and efficiency. That’s what will make it more sustainable.

Rajesh Agrawal, who has been a fintech entrepreneur, talked about his experience as to how expensive it was for remittances to take place – especially foreign remittances and how regulators need to view this space. He also spoke about how governments need to embrace new innovation and work with innovators to keep ahead of the curve.

Leo Puri, meanwhile talked about how financial inclusion is occurring in India, and how technology can be made more pervasive in terms of savings and equity products. Richard Hird of De La Rue, the biggest currency printer in the world made an interesting point that physical currency is still going to be used and it’s a long way before digital currency becomes as trustworthy and secure as the paper currency.

India: From Cash-dependent To Cash-free

In the past, the digital economy has thrived much on discounting, courtesy the shopping festivals organised by Flipkart, Amazon, and the like. This year, however, steps have been taken to limit discounting through the formulation of new Department of Industrial Policy and Promotion (DIPP) DIPP guidelines.

Also, with the demonetisation drive, digital payments are expected to be adopted faster by people given the surge witnessed by wallet players, post the announcement. This means, India’s digital economy would hopefully get a boost after people get used to the convenience of going cashless. The adoption of digital technology by financial services providers including banks is also among the core goals of the Pradhan Mantri Jan-Dhan Yojana – the government’s financial inclusion initiative

The digital payments industry in India is projected to reach $500 Bn by 2020, contributing 15% to India’s GDP, as per a recent report by Google and Boston Consulting Group. According to the report, digitisation of cash will accelerate over the next few years. Non-cash payment transactions, which today constitute 22% of all consumer payments, will overtake cash transactions by 2023.