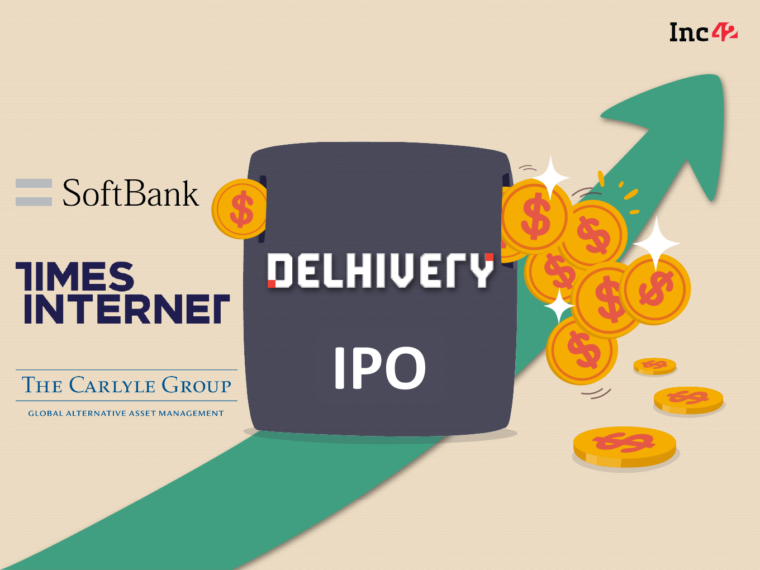 Despite selling 5% of its stake, Japan’s SoftBank holds Delhivery shares worth $873 Mn

Early backer Times Internet saw the highest return on investment, as the price of the shares it held increased 139X

The Carlyle Group, even after offloading 20% stake during the IPO, continues to hold shares worth $239.6 Mn

Shares of Gurugram-based logistics startup Delhivery listed on the bourses on Tuesday (May 24), five months after it received markets regulator SEBI’s nod for public listing. With this, Delhivery became the first tech startup to go public at a time when the global market sentiment is negative.

Shares of all the listed startups, irrespective of their profitability, have been under pressure in recent times due to the negative market sentiment globally. Amidst all these, Delhivery shares ended 10% higher from its issue price of INR 487 on its listing day, bringing some hope for retail as well as institutional investors.

The logistics startup’s IPO turned out to be a money making event for some of its big investors, including SoftBank and Times Internet.

Japan’s SoftBank, which has backed giants such as Grab, Uber, WeWork, among others, is the largest stakeholder in Delhivery. Masayoshi Son’s company held around 22.78% stake in Delhivery before it went public.

SoftBank entered the cap table of Delhivery quite late. The venture capital first invested in Delhivery in March 2019, pumping in around $315 Mn as part of a $415 Mn equity round. As per regulatory filings, Delhivery had then allotted a total of 12,35,331 preference shares. It is worth mentioning that it was SoftBank’s investment that actually helped Delhivery get the unicorn status in 2019 – a time when the total number of unicorns in the country stood at 32.

As per the startup’s regulatory filings, in December 2019, SoftBank bought Delhivery shares worth $42 Mn through a secondary transaction.

Considering the acquisition cost and the selling price of INR 487, the return on investment (ROI) for the 5% stake it sold would be 148.2%. The value of the remaining shares of the startup held by SoftBank stood at $873 Mn considering the closing price of Delhivery shares of INR 505.10 on the NSE on Thursday.

American multinational private equity firm Carlyle Group, which held 7.16% in Delhivery before listing, sold 9.3 Mn equity shares during the IPO. Considering its weighted average cost of acquisition of INR 139.8 per share, Carlyle Group’s ROI was at 248.3% when it sold a part of its stake in the IPO. Even after selling 20% stake during the IPO, Carlyle Group as on today continues to hold shares worth $239.6 Mn.

Though Delhivery’s share price dropped 6% to INR 505.11 on the third day of trading, the startup’s overall valuation stood 3.51% higher at $4.71 Bn against its pre-IPO valuation of $4.55 Bn. Delhivery’s successful listing will further encourage other Indian startups who are looking to go public.