In 2016, Mohit Goel Had Claimed To Offer A Smartphone Which Was Less Than $4 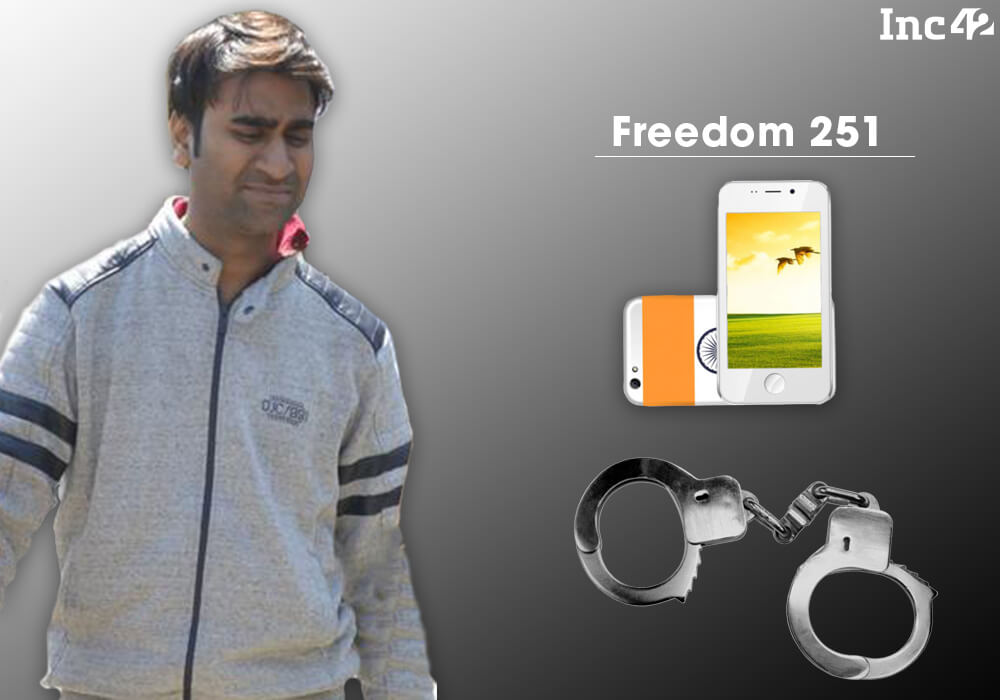 Mohit Goel, who once made headlines by claiming to offer a smartphone -‘Freedom 251’ at less than $4 (INR 251), has been arrested by Delhi Police in an extortion case. Reportedly, Goel along with two other suspects was allegedly trying to extort money for settling a rape case in Delhi.

Goel founded Ringing Bells in 2016 and launched its flagship product Freedom 251, claiming it to be the world’s cheapest smartphone. The device is a 3G smartphone and has a 1.3 GHz quad-core processor backed by 1GB RAM and 8GB internal memory. It also supports external memory cards of up to 32GB. To power Freedom 251, the company has put a 1,450 mAh battery and claims to have a service network of 650 centres across India.

While some considered ‘Freedom 251’ as a possibility, some took it as a Ponzi scheme. But the excitement it gained at the initial stage was phenomenal. As earlier reported, around 30K people pre-booked the ‘Freedom 251’ smartphone and it was reported that the company made 70 Mn registrations before its payment gateway crashed. The company also claimed to have delivered 5,000 smartphones in July 2016 and it also announced to have delivered over 65,000 and more to those who had booked the device in cash on delivery (COD) mode.

Going a step ahead, Goel further issued a statement that if the Indian government can give his company $7.4 Bn (INR 50K Cr), over “750 Mn of India’s population would become a part of digital India by owning a smartphone at $4 (INR 251).”

“The government can make the phone — under our Freedom brand — from some other vendor. I have no objection to it. To make such phone for every Indian citizen, the government needs to allocate funds from its Digital India initiative,” Mohit Goel had said.

However, two years hence, the world’s cheapest smartphone has now disappeared and all we are left with the tales of multiple legal tangles it entered into.

Earlier, in February 2017, Mohit Goel along with four others was arrested by Ghaziabad police on charges such as forgery, criminal breach of trust, cheating and criminal conspiracy. The FIR was filed by Ayam Enterprises, one of the distributors of the company, against a pending payment of $23.6K (INR 16 Lakhs) from Ringing Bells as they could not deliver phones and accessories.

“The accused siphoned off the money and did not deliver any goods. In February 2017, some distributors filed a case against me and I was jailed for six months. But they are the real reasons behind the smartphones being not delivered to the registered customers,” Mohit Goel had said in a media statement.

At the same time, Goel also reiterated his claims for delivering the smartphones by April-May 2018, and also announced to enter into another venture, the details for which are still undisclosed.