Delhi High Court Cracks Down On Govt. Over High Fares During Odd-Even

Delhi High Court on Monday issued a notice to Delhi Government asking to file a reply on steps taken by government to stop cab aggregators (Ola & Uber,) from charging fares arbitrarily, reported ANI. The High Court is likely to hear the matter on April 25th.

The move comes after Delhi’s CM Arvind Kejriwal tweeted that the government would take strict action, including cancellation of permit and impounding vehicles, against taxis, which charged over the government prescribed rates.

The uproar started when Delhi Autorickshaw Sangh and Delhi Pradesh Taxi Union had called a strike against surge pricing on 18th April (today), threatening to create a roadblock during the odd-even drive. However it was called off last minute on Sunday after Chief Minister Arvind Kejriwal promised to take strict actions against Ola and Uber to up the ante against Uber and Ola doing the trick.

Gopal Rai, Delhi Transport Minister said, “The government is serious about preventing arbitrariness by app-based taxi services and is ready to take strict action against them.”

Later on Monday afternoon Delhi govt ordered to impound cabs and cancel permits of any cabs (including Uber and Ola) if they were found charging more than govt prescribed fare limit. It also released a helpline number for commuters.

Owing to the orders by the Delhi Government, Ola and Uber have temporarily withdrawn the surge pricing.

In response to a query emailed by Inc42, Gagan Bhatia, General Manager, Uber North, responded that Uber has also withdrawn the surge pricing in Delhi with immediate effect. 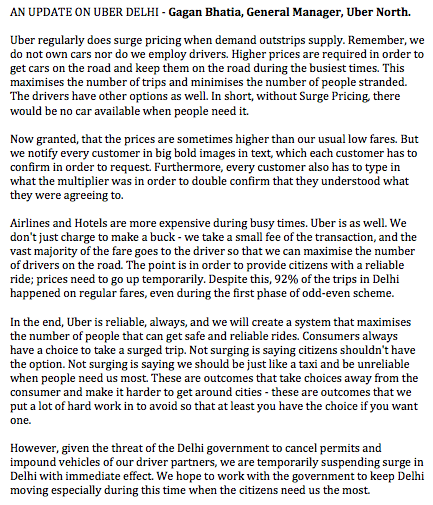 Delhi is not the only state to put an end to surge pricing. Earlier this month the Karnataka Government also put a stop to the surge pricing for app-based ride hailing services such as Ola and Uber, under the new policy for tech-enabled taxi aggregators.  Later reports surfaced that the Maharashtra government was planning adopt concrete policies on fare fixation to curb surge pricing.

After both aggregators withdrew surge prices from their respective apps a visible dip ensued in the availability of cabs.

While the Auto and Taxi unions are crying foul over the exorbitant demands by cab aggregators, they themselves charge fares as per their wish, regardless of the meters fixed in the Autos. The commuters’ vows will not end till the time the government takes strict actions and prescribes concrete policies regarding private vehicle owners like Auto and Taxi as well as Cab aggregators.