Important Events In The World Of Cryptocurrency, Bitcoin, ICOs And More [8-14 July 2018] 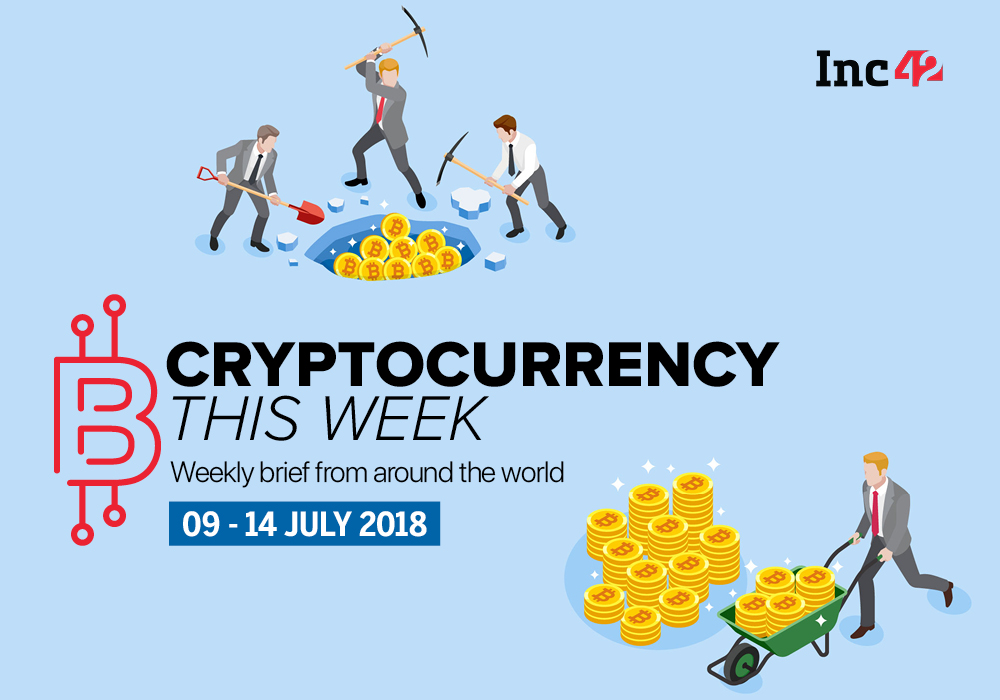 While the Supreme Court of India is set to hear the cryptocurrency-related plea on July 20, the RBI circular which banned the country’s banks from extending their services to cryptocurrency entities has badly affected the tradings in the country. While all the leading exchanges — Zebpay, Unocoin, BuyUCoin, WazirX, and Koinex — have gone for crypto-to-crypto tradings now, one of the exchange owners told Inc42 that the volume of the trading, as well as the number of users, has plunged by over 60% in the last few weeks.

However, despite the fiat-to-crypto ban in the country, active traders have continued to support cryptocurrency either by HODLing or through arbitrage.

Speaking on the RBI move, David Bleznak, founder And CEO of Totle, a Birmingham-based crypto trading platform that aggregates order books from DEXs such as Bancor, Kyber, Radar Relay, and EtherDelta told Inc42, “Decentralised exchanges will enable international trade to thrive despite the regulations imposed by governments around the world.”

“The blockchain is a trustless ledger that does not have borders and allows participation by the disenfranchised and the elite alike. India will not be able to control the distributed ledgers but will be able to enforce bans on centralisedd systems that facilitate activity in the space. These actions will drive individuals to utilize DEXs and increase the rate of adoption of truly decentralised platforms. The democratisation of finance will be fought by regulators and bureaucrats because it threatens the status quo. In the end, individuals will choose the system that gives them the authority to make decisions with their own assets without having to ask permission from institutions,” added David.

Meanwhile, it seems Bitcoin is continued to be at war with the leading economists. After the Nobel Laureate economists, Paul Krugman, Robert Shiller termed Bitcoin as bubble, fraud and evil, now another renowned economist and Nobel laureate Joseph Stiglitz has jumped on the bandwagon saying “The demand for Bitcoin will crash. The best way of rendering Bitcoin useless is through regulation. That will curb illicit activities often perpetrated using the digital currency.”

Speaking during a policy dialogue at Columbia University, Joseph told that Bitcoin is primarily used for money laundering and illicit activities.

Let’s take a look at this week’s development in the crypto world!

Bitcoin billionaire Changpeng Zhao, founder of Binance, one of the largest cryptocurrency exchanges in the world has now announced plans to launch world’s first decentralised bank in Malta, reported The Sun.

As per the report, the Maltese government has also agreed to invest $155 Mn against the 5% stake in the decentralised bank. The bank called Founders Bank will be run by a community and will not belong to any single corporation.

Snapchat investor Lightspeed Venture Partners recently announced that it has raised $1.8 Bn fund for startup investments. Going by the latest footprints of Lightspeed Venture Partners which recently invested in many cryptocurrency startups such as Telegram and Basis, a significant part of the raised fund might get injected into cryptocurrency startups.

Recently, many VCs have come forward with huge funds to support cryptocurrency startups irrespective of the ‘not so friendly’ regulatory measures being taken by the governments across the world.

While the Switzerland-based cryptocurrency payment platform TokenPay has bought 9.9% equity of a German bank, WEG Bank and intends to acquire the bank in future, the deal also saw a strategic partnership between TokenPay and Litecoin Foundation.

In a press statement, it was announced that the 9.9% stake in WEGBank was further transacted to the benefit of Litecoin Foundation in exchange for a broad and comprehensive marketing and technology service agreement to benefit TokenPay and its related cryptocurrency and business operations.

As a result of this partnership, TokenPay will directly benefit from Litecoin’s high-level blockchain mechanization capabilities. The partnership will focus on several key areas that have been identified by analysts as critical to the success of the enterprise.

This includes, but is not limited to, the TPAY cryptocurrency and its vital blockchain, eFin decentralized exchange (DEX) and the EFIN coin, TokenSuisse asset management and structured financial products, WEG Bank fintech platform including high demand consumer debit cards and the TokenPay Multisignature Transaction Engine designed for processing fast and secure crypto ecommerce payments for merchants.

As per the report, while the project is named Ronaldinho Soccer Coin the stadiums will be developed in 300 locations around the world, with facilities planned for countries in Africa, S.E. Asia, and the Middle East over the next three years.

In other news, like Venezuela, Iran might pave way for cryptocurrencies soon. As the US has reimposed new sanctions amid US President Trump withdrawing his hands from the nuclear deal signed by Iran, the US and Europe, Iran is now facing fresh troubles in the international trades and hence might go for Bitcoin or other cryptocurrencies, said some reports.

Meanwhile, Coinbase, leading cryptocurrency exchange app has plunged to its lowest ranking owing to the Bitcoin slow down. The app is currently ranked at 40th among the financial apps in the US, lowest in the last one year.