Important Events In The World Of Cryptocurrency, Bitcoin, ICOs And More [16-21 July 2018] 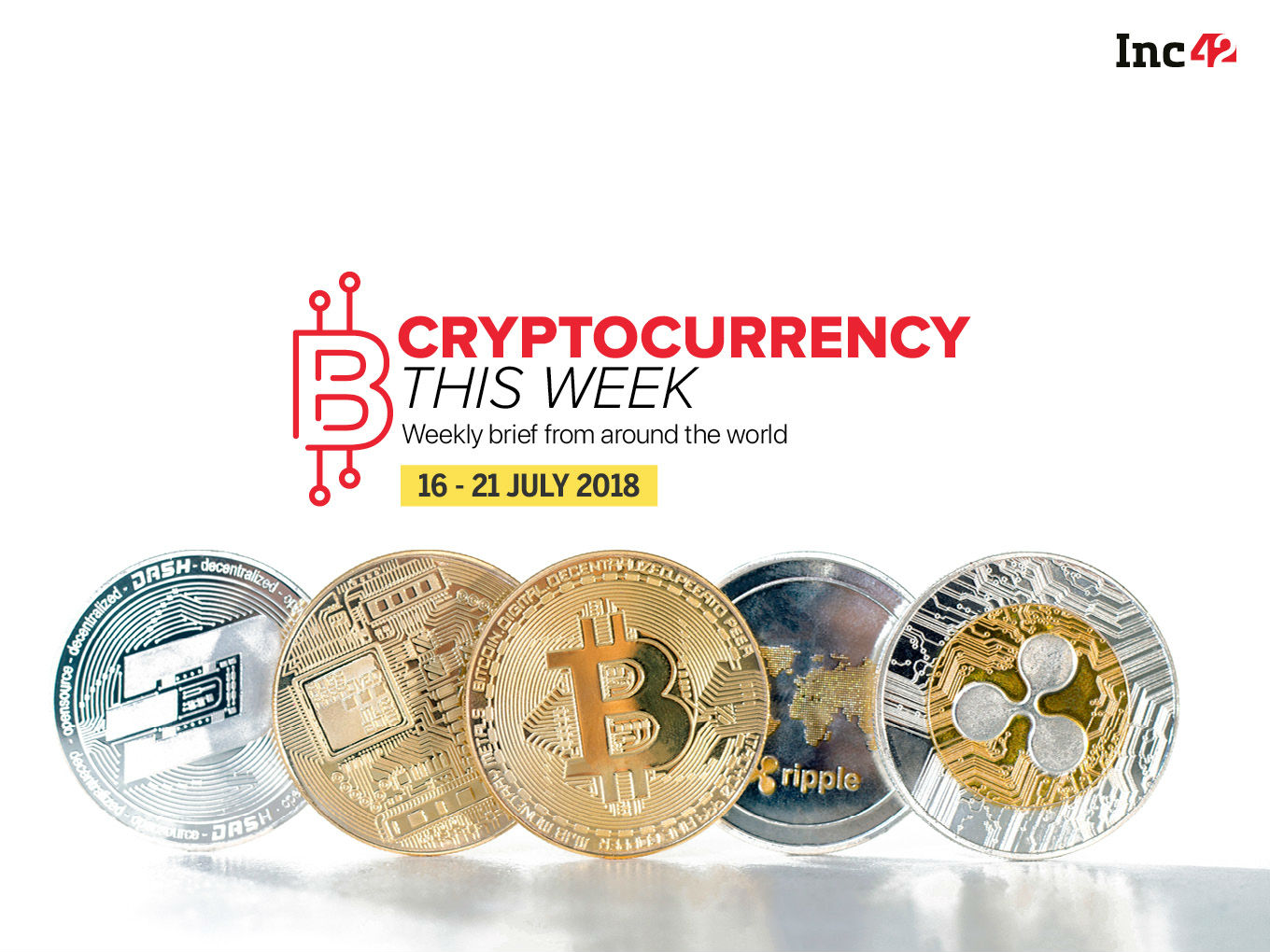 The Supreme Court of India, which is hearing a bunch of petitions filed by cryptocurrency exchanges, groups, and enthusiasts, on July 20 set the final hearing date in the case for September 11. Meanwhile, as the RBI circular dated April 6 forced exchanges to shut down fiat-to-crypto transactions in India, cryptocurrency exchanges have gone P2P (peer-to-peer). Koinex became the latest exchange to launch a P2P trading platform — Loop — for Indian investors.

Meanwhile, after a two-month slowdown, Bitcoin is on the rise. Gaining over $1000 this week, Bitcoin trading at $7.3K back, is back with a bang. And so are other prominent cryptocurrencies.

Litecoin founder Charlie Lee, too, is back in the news. Speaking of cryptocurrency trading, Charlie Lee recently urged users to buy at least one Bitcoin before trading in any other cryptocurrency. He tweeted, “There will be at most 21 Mn Bitcoins in existence. There isn’t even enough BTC to go around for every millionaire to own one. So before you buy any other coin (LTC included), try to own at least 1 BTC first.  Once you have 1 BTC, buy all the shitcoins you want!”

Let’s take a look at the latest developments from the world of cryptocurrencies!

In a much-awaited cryptocurrency-related hearing on July 20, a three-judge bench of the Supreme Court of India set the next and probably the final hearing date in the case for September 11.

The Reserve Bank of India (RBI), in its defence, told the Supreme Court that the circular has been issued to minimise illegal transactions, which could majorly impact the international flow of funds. The RBI also informed the three-judge bench that an interdisciplinary committee headed by Subhash Chandra Garg, the principal secretary of the department of economic affairs, is already looking at regulatory measures for cryptocurrencies. But, the circular was issued as a precautionary measure until a regulation is put in place.

Speaking to Inc42, Rashmi Deshpande, associate partner, Khaitan and Co, the advocate in this case for one of the petitioners — Kali Digital — said, “The Supreme Court is likely to dispose of the case on September 11, after hearing the arguments from both the parties.”

Limited arguments were advanced on behalf of the Internet and Mobile Association of India (IAMAI) and the RBI. Since Sebi and a few others have not filed their response to the petition seeking a crypto regulation, the apex court directed the hearings be completed. Final arguments are expected to come on September 11.

In line with exchanges such as Zebpay, Unocoin, BuyUCoin and WazirX, cryptocurrency exchange Koinex has now launched its P2P trading platform, Loop, for Indian investors to transact in cryptocurrencies against INR fiat currency.

Rahul Raj, co-founder & CEO, Koinex said, “Loop is in line with our mission to transform India into a hotbed of blockchain technology development, as Loop is a step closer to decentralized trading.”

Speaking to Inc42, founder and CEO Yash Mishra stated, “Unlike other cryptocurrencies, Vollar addresses the critical issues of volatility and liquidity as it’s pegged up against the top 20 fiat currencies in the world. Hence unlike the other popular cryptocurrencies, mining of Vollar is proportional to the real market conditions.”

Yash added that the non-users of VoxWeb social network will also be able to buy and sell Vollar coins on cryptocurrency exchanges and use it as a store of value or currency.

In a similar development, the tech giant IBM is also experimenting with a cryptocurrency that’s pegged to the US dollar. The company has teamed up with financial technology startup Stronghold for the ambitious project, reported CNBC.

Cryptocurrency Played A Major Role In Fixing US 2016 Election

The office of Special Counsel Robert Mueller at the US Department of Justice (DOJ), which recently said that 12 Russian intelligence officers were involved in the 2016 US presidential campaign, has now presented a detailed report on how these intelligence officers, who are members of Russia’s Main Intelligence Directorate of the General Staff (GRU), mined and used cryptocurrencies to fund the infrastructure necessary to carry out their operations.

According to the report, the GRU officers conspired to launder the equivalent of more than $95,000 through a web of transactions structured to capitalise on the perceived anonymity of cryptocurrencies such as Bitcoin.

G20 watchdog the Financial Stability Board (FSB) recently submitted its report to the G20 Finance Ministers and Central Bank Governors on the work of the FSB and standard-setting bodies on crypto-assets.

For its part, the FSB has developed a framework in collaboration with the Committee on Payments and Market Infrastructures (CPMI), to monitor the financial stability implications of developments in crypto-asset markets. The report published today sets out the metrics that the FSB will use to monitor crypto-asset markets as part of its ongoing assessment of vulnerabilities in the financial system.

India is also a prominent member of the G20 group.

As the report states, the objective of the framework is to identify any emerging financial stability concerns in a timely manner. To this end, it includes risk metrics that are most likely to highlight such risks, using data from public sources where available.

UK Mosque Raises More Donations In Crypto Than In Cash

East London-based Shacklewell Lane Mosque which just started accepting cryptocurrencies in May, has now announced that within two months, the mosque has actually received more cryptocurrencies than cash. A phenomenal success not only for the mosque but an inspiration for other charity organisations as well.

Cryptocurrencies can assist with the monetising system. Speaking at a Bit2C cryptocurrency conference, Dr Bodo-Trachtenberg, deputy governor-general of the Bank of Israel presented the Bank of Israel’s stand on cryptocurrency: “The technology of distributed and encrypted currencies has the potential to contribute to the monetary and financial system in the long term. You have to see what you allow and where you turn down your enthusiasm.”

“I am told that digital coins can leave users with control over data and allow decentralisation. But that’s what they promised about the internet — which ultimately created huge information giants that hurt competition. Token trading and smart contracts is a technology that expands the possibilities of money and trading in assets today, can streamline processes that pass through many intermediaries,” he added.

In other news, former Chelsea soccer player Drogba has now become the ambassador of a cryptocurrency-related project founded by Artak Tovmasyan. Like Voxweb, the digital platform combines a social network with a cryptocurrency bank and a trading floor.

Stay tuned to Inc42 for more latest news on Bitcoin, cryptocurrencies and ICOs!