The Central Bank of Iran releases a draft on crypto regulations, reversing a previous ban However, the interdisciplinary committee led by the department of economic affairs secretary Subhash Chandra Garg is in the final stages of the draft crypto/virtual assets regulation, according to a submission earlier filed by the Indian government.

Many lawyers dealing with cryptocurrencies or crypto assets recently also met the committee and filed their submissions.

Mumbai-based Nisith Desai Associates, in an independent submission made to the Garg committee, has batted for crypto-asset regulations.

Favouring regulation — not prohibition — the firm has, in public interest, also proposed a framework around crypto regulations, stating that it will be a win-win situation for both consumers and businesses and is also practically implementable by the government.

Meanwhile, the Central Bank of Iran has released an early draft of its regulations on cryptocurrencies, reversing a previous ban. On a similar note, the Securities Commission of Malaysia (SC) has announced plans to regulate ICOs and trading of cryptocurrencies. 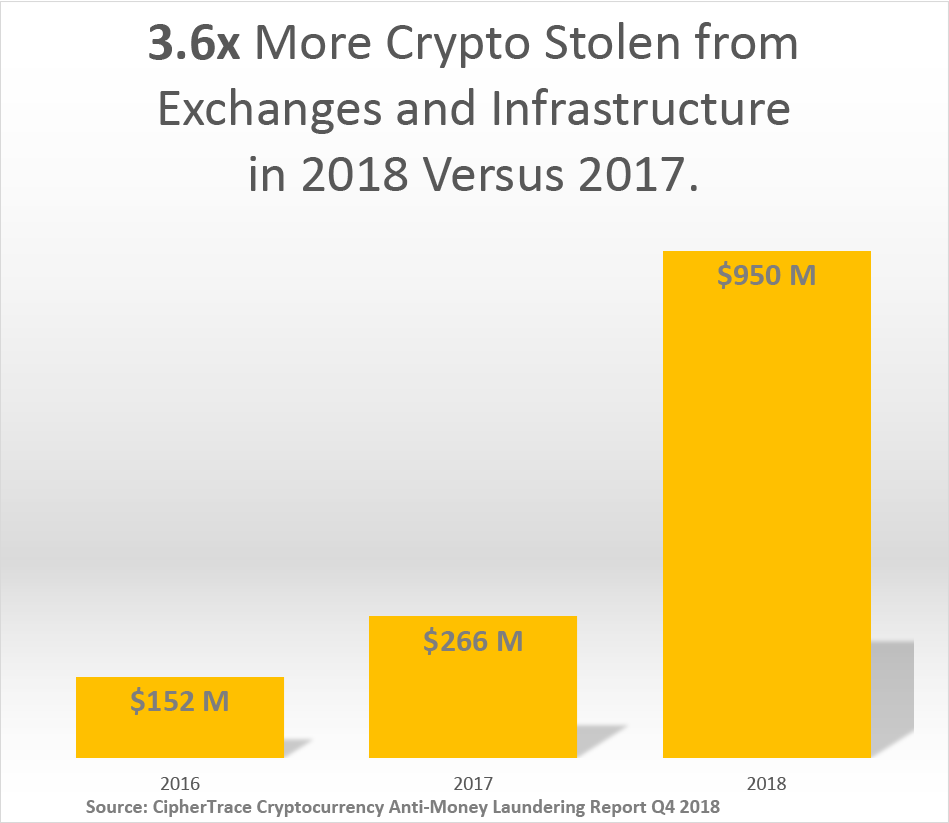 Regardless of Bitcoin’s performance in 2018, crypto crime hit a record high, according to CipherTrace’s new Cryptocurrency Anti-Money Laundering Report.

The report said that $1.7 Bn in cryptocurrency was stolen and scammed in 2018 — a dramatic rise in criminal activity despite a slump in the market.

Theft from cryptocurrency exchanges accounted for the majority of the criminal activity: more than $950 Mn was stolen by hackers in 2018 — 3.6 times more than in 2017.

On top of these thefts, the research also showed that investors and exchange users lost at least $725 Mn in cryptocurrency in 2018 to exit scams such as fraudulent ICOs, phoney exchange hacks, and Ponzi schemes.

The top 10 trending crypto threats, providing actionable threat intelligence for anyone dealing with cryptocurrency are:

As speculated since last year, the Central Bank of Iran has released an early draft of its regulations on cryptocurrencies, reversing a previous ban, but still imposing restrictions on the use of the digital currency inside the Islamic Republic, reported Aljazeera.

In an announcement made during an annual two-day Banking and Payments conference, the Central Bank of the Islamic Republic of Iran also announced the suspension of the existing ban on cryptocurrencies with limited restrictions. For instance,  cryptocurrencies such as Bitcoin can be used only for international payments and not inside the country.

Iran is also in a process of developing its own cryptocurrency and currently sees it as the best fit route to avoid US sanctions.

Meanwhile, according to The New York Times, the United States Treasury has imposed sanctions and issued warnings to digital marketplaces that buy and sell Bitcoin and to companies that sell computers used to process Bitcoin transactions. The US Treasury has directed that they should not provide services to Iranians.

Malaysia To Regulate Crypto and ICOs

After getting a nod from Malaysian finance minister YB Tuan Lim Guan Eng, the Securities Commission Malaysia has announced plans to regulate the offering and trading of digital assets such as cryptocurrencies and ICOs.

The Commission has said that it will soon release guidelines that will establish the criteria for determining fit and properness of issuers and exchange operators, disclosure standards and best practices in price discovery, trading rules and client asset protection.

Those dealing in cryptocurrencies will be required to put in place anti-money laundering and counter-terrorism financing (AML/CFT) rules, cybersecurity, and business continuity measures.

The relevant regulatory framework is expected to be launched by end-Q1 2019.

However, according to Nasdaq officials, the vetting process is not easy and includes business model, KYC/AML, and exchange governance and controls.