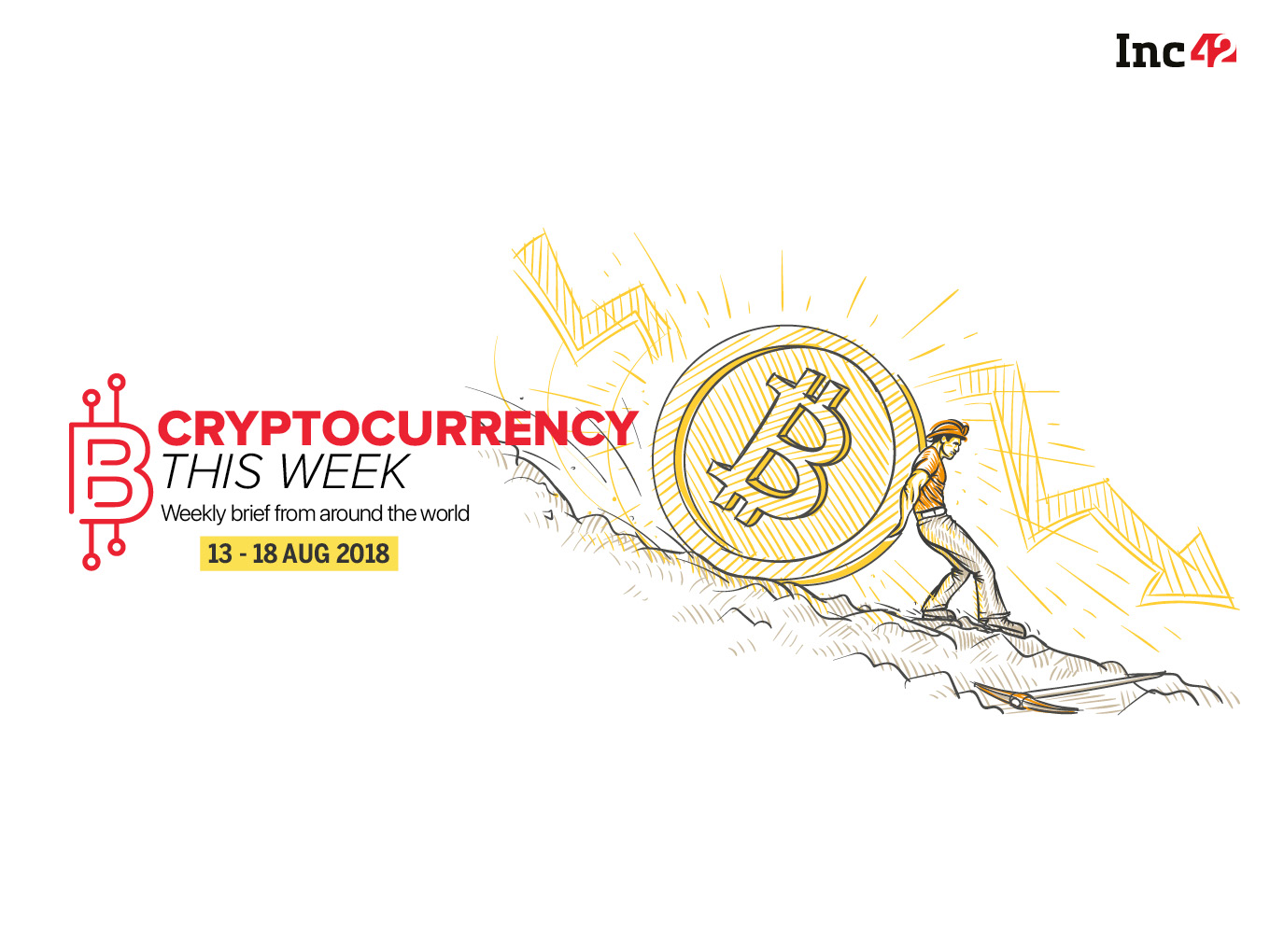 Tough times for cryptocurrency enthusiasts. Having hit $950 Bn last year, the cryptocurrency market valuation has been continuously going down since then. While Bitcoin, this week, having plunged below $6K is back to $6.5K now; however, crypto marvels clearly indicate tougher times ahead for Bitcoin and other cryptocurrencies.

Warning that over 90% of the cryptocurrencies are heading to disappear, Hong kong-based Bitcoin Wallet Xapo’s President Ted Rogers tweeted, “We could be in the midst of the extinction-level event for “cryptoassets” that many maximalists have predicted. 90%+ of @CoinMarketCap list will disappear eventually – might as well happen now.” 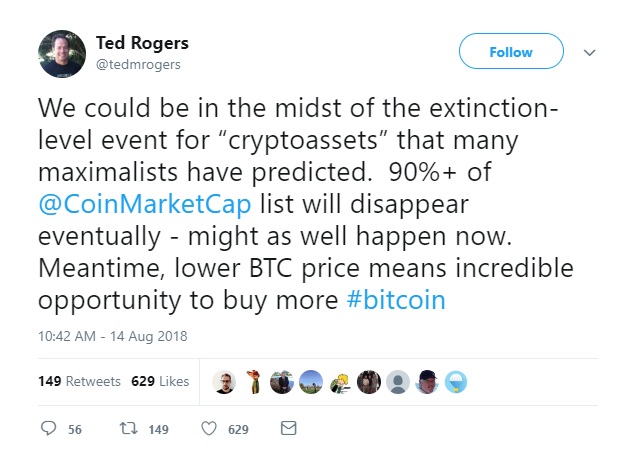 Brian Armstrong, Chief executive of San Francisco-based leading cryptocurrency exchange Coinbase too voiced similar opinion. In an interview with Bloomberg, he said that only about 10% of cryptocurrencies, including Bitcoin, will be used in real life applications such as in games and other purchases online; however, the mass Bitcoin adoption for payments is going to take a long time.

Bill Harris, former CEO of Paypal too joined the Bitcoin bubble debate. Speaking of Bitcoin, Bill averred that Bitcoin is a “cult”, heading “straight to zero.” Harris, however, later clarified that he didn’t mean absolute zero but near to zero.

Let’s take a look at this week’s crypto developments!

Targeting India and South-East Asian market, serial entrepreneur Akash Aggarwal has now announced the launch of Beta platform of his Singapore-based crypto exchange Alluma offering crypto-to-crypto trading, with Bitcoin (BTC) and Ethereum (ETH) as the base currencies for Indian traders. The Alluma Beta exchange will also support the trading of other coins such as Ripple (XRP), Bitcoin Cash (BCH), and the FUEL token by Etherparty.

The platform also offers a “liquidity through partnerships with other leading exchanges”, a loyalty program powered by the proprietary LUMA token, and best-in-class compliance and security frameworks. The platform claims to be supported by a six-layered security architecture, as well as robust localised KYC & AML (Anti Money Laundering) policies based on financial industry international best practices, and a multi-layered corporate governance structure.

Commenting on the development Akash Aggarwal, founder and CEO, Alluma said, “After several months of product development and enhancements, we are proud to launch our Beta exchange for Indian cryptocurrency traders. With the launch of the platform, we have aimed to solve one major problem crypto traders face in India is the time it takes from account registration to first trade, which we have brought down to as little as five minutes.”

Through this key partnership with ODX, YouDeal solves this issue by providing users free internet access to their services. Customers will be able to access the app 24/7, even when they have no mobile data plan or mobile airtime credits.

“Data free access is a critical advantage in emerging markets. Your app becomes the default choice for most people most of the time,” said Nix Nolledo, ODX Founder and CEO.

US entrepreneur and cryptocurrency investor Michael Terpin filed a $224 Mn lawsuit against telco giant AT&T, accusing it of fraud and gross negligence in connection with the theft of digital currency tokens from his personal account, reported Reuters.

As per the report, Terpin, in his 69-page petition, alleged that on January 7, 2018, the crypto tokens were stolen from him through what he alleged was a “digital identity theft” of his cellphone account. In the complaint, he said AT&T was his service provider.

The UK banks are now reportedly targeting crypto traders in their country. Some victims have even claimed that their homes were raided and the local police even seized all their computer-related equipment.

The victims claim their account have been frozen by the banks despite possessing no criminal record in their entire career. This could be surprising given the fact that many of the UK jurisdictions have in fact gone in favour of cryptocurrencies.

One of the victims told to a Bitcoin news daily, “I tried to log in to my Clydesdale Bank current account (the one that I’ve had since childhood) late on August 14 evening only to be presented with a message saying “Sorry, we’re no longer able to assist you online”. I then tried the app which said, “Your account is locked, please call”. I called the help centre only to be told that the guy on the other end of the phone also couldn’t access my account nor confirm whether or not my (six-figure GBP) balance was safe. I was told that he was completely unable to help and that I would need to call HQ in the morning.”

He added, “I called HQ this morning and was put on hold for 20 minutes. When the guy came back, he told me that there was a letter in the post to me and that he couldn’t say anything more about what was happening or whether or not my balance was safe. So I requested to be put through to the most senior person available, who then told me that my account had been locked down but he was unable to tell me why, nor who put the lock on my account. He refused to even tell me which department placed the block. He told me that my only option was to go into my local branch and request a manual withdrawal of funds. However, he explained that such a withdrawal would need to be approved by the bank and therefore I wasn’t guaranteed to get access to my cash.”

In one of the most challenging cases being investigated by Thailand’s Crime Suppression Division (CSD), the investigation has now accepted that a gang of Thai Bitcoin scammers duped Aarni Otava Saarimaa, a 22-year-old Bitcoin millionaire.

In the fraud caused by the gang, the Bitcoin millionaire had ended up losing 5.5K Bitcoins, worth of $24 Mn (800 Mn Baht), reported Bangkok Post.

Busting an ICO scam, Robert A. Cohen, Chief of the SEC’s Cyber Unit has issued fresh warnings stating, “Investors should be alert to the risk of old-school frauds, like oil and gas schemes, masquerading as innovative blockchain-based ICOs.”

The Securities and Exchange Commission On August 14, had obtained permanent officer-and-director and penny stock bars against the founder of a company who perpetrated a fraudulent initial coin offering (ICO) to fund oil exploration and drilling in California.

According to the SEC’s order, David T. Laurance and Tomahawk Exploration LLC attempted to raise money through the sale of blockchain-based digital tokens called “Tomahawkcoins.”

The SEC’s order finds that the defendants’ promotional materials used inflated projections of oil production that were contradicted by the company’s own internal analysis and misleadingly suggested that Tomahawk possessed leases for drilling sites when it did not.

The success of cryptocurrency Tether has been largely due to the claim of Tether being backed by US dollar. This is why, unlike other cryptocurrencies which are too volatile, one Tether equals one dollar.

However, the Wall Street Journal in its report, decodes the myth that Tether has dollar reserves backing each of its approximately $2.5 billion worth of coins in circulation. The WSJ reports that there has been no audits, no bank details that could support the Tether-backing claim.

“Tether has never produced an audit showing it has the purported reserves. The company that controls tether maintains it has the reserves, yet it has never named the banks it uses to hold these funds, nor said where they are based and regulated,” said the report.

Even blockchain by its very concept is transparent, the cryptocurrencies may not be as transparent in their operations as it is being perceived by users.

Stay tuned to Inc42 for more news on cryptocurrencies and ICOs!