Cryptocurrency This Week: RBI Says No To Bitcoin For Payments & More

Cryptocurrency This Week: RBI Says No To Bitcoin For Payments & More

Important Happenings From The World Of Cryptocurrency, Bitcoins, ICOs And More [ 5 - 11 November] 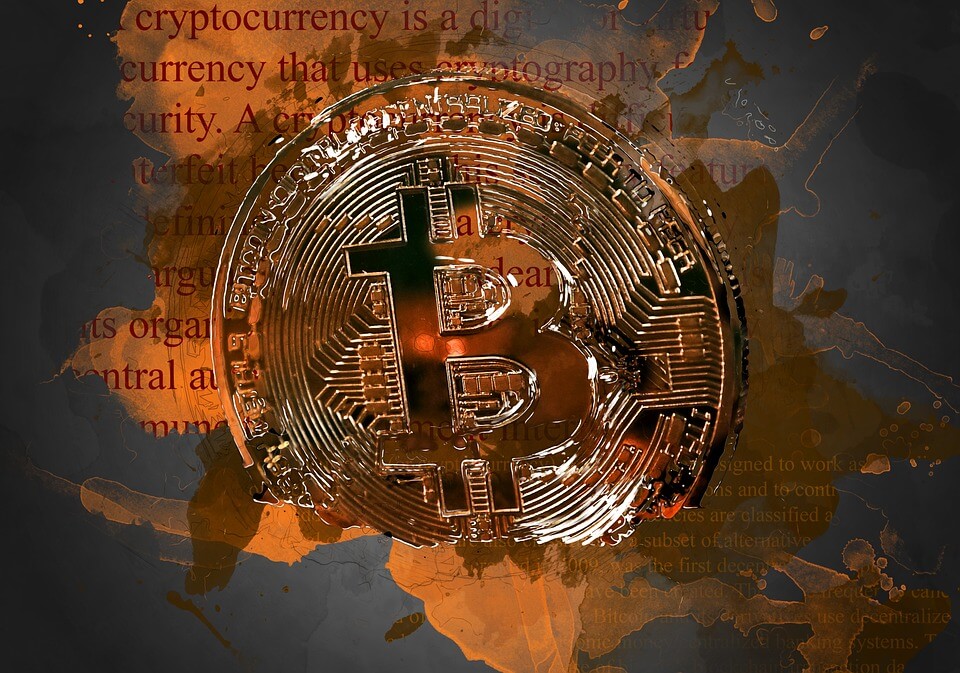 “Bitcoin is Punk Rock. You can’t stop it,” says Andreas M. Antonopoulos, the protagonist in ‘Bitcoin: The End of Money As We Know It’. However, the Indian government, unwilling to learn and enact a cryptocurrency bill, has made sure that it is not ‘on the rocks’ in India. In Cryptocurrency this week, while RBI Executive Director S Ganesh clarified that Bitcoin will not be used against payments and settlements, the most debated Segwit2x hard-fork of Bitcoin blockchain was finally averted, thanks to the lobbying effort by Bitcoin.org. From an all-time high peak $7,721 to currently trading at $6,652, the SegWit2x fiasco has momentarily paused the Bitcoin price rise. 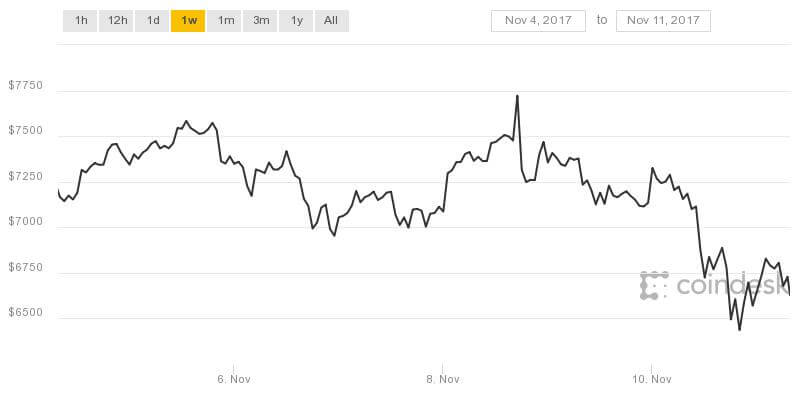 As reported last week, the dark web of Bitcoin and other cryptocurrencies is becoming stronger amid Bitcoin’s reckoning, owing to the lack of regulations worldwide.

In other news, Hive Blockchain Technologies, a Canadian Firm is on a dream run. The company’s shares are up by 3,690%. However, Nvidia’s cryptocurrency revenue has dropped by more than half from the prior quarter.

Let’s take a look at the recent developments in the world of Cryptocurrency!

The SegWit2x Saga: The Hard-Fork That Was Not!

The chief architect of SegWit2x hard-fork, Mike Belshe has announced the suspension of SegWit2x (Bitcoin2x or B2X) hard-fork scheduled on November 16, 2017, giving much-needed relief to the Bitcoin enthusiasts. The decision was taken after NYA signatories who had earlier vouched for the SegWit2x hard-fork pulled back their support, and the largest Bitcoin exchange Bitfinex also decided not to use Bitgo as their core wallet.

In their suspension statement, SegWit2x lobby led by Mike Belshe, Wences Casares, Jihan Wu, Jeff Garzik, Peter Smith and Erik Voorhees said, “Our goal has always been a smooth upgrade for Bitcoin.  Although we strongly believe in the need for a larger block size, there is something we believe is even more important: keeping the community together. Unfortunately, it is clear that we have not built sufficient consensus for a clean blocksize upgrade at this time. Continuing on the current path could divide the community and be a setback to Bitcoin’s growth. This was never the goal of Segwit2x.”

On the largest and most active Bitcoin forum /r/Bitcoin/, SegWit2x is also being seen as a scam, where few were trying to make billions out of the hard-fork.

RBI Reaffirms Its Hostility Towards Bitcoins

Bitcoin will not be used as currency, confirmed RBI Executive Director S Ganesh. Responding to an audience query at a banking event on November 6, 2017, Ganesh stated, “Our current position on Bitcoins is that we will not be using it for any payments and settlements, though the technology (blockchain) underlying cryptocurrencies will not end.”

Speaking to Inc42, Sathvik Vishwanath, Founder and MD of Unocoin, on the statement by RBI Executive Director, said, “Though this is not an official statement of RBI, what we can infer from the statement is that as of now, they are barring Bitcoins or other cryptocurrencies as a mode of transaction for products and services. However, the number of transactions happening in terms of Bitcoins for the payment purposes is very limited. India is far behind when it comes to making payments in Bitcoins.”

It seems the financial authorities in India are still clueless about the potential of Bitcoin and every delay from their end will only strengthen the dark web, discouraging people and startups who want to adopt Bitcoins and other cryptocurrencies legally. 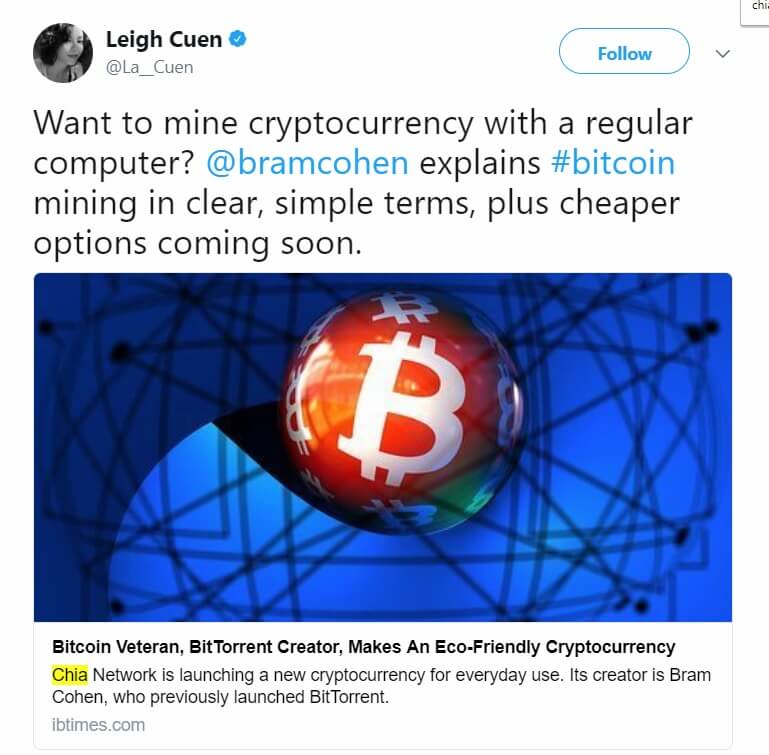 BitTorrent Founder Bram Cohen has announced his plans to launch another Cryptocurrency Chia by 2018. Speaking to a tech-daily, Cohen said that his new company called Chia Network will launch a cryptocurrency based on proofs of time and storage rather than bitcoin’s electricity-burning proofs of work. Thus, Chia will use only cheap and abundant unused storage space on hard drives for proof-of-work.

According to Cohen, funds have already been raised in a hot Seed funding round. Starting from the scratch, the project is fixing the technical glitches that Bitcoin has. The ambitious project is scheduled to launch by late 2018. Keeping investors and enthusiasts onboard, however, won’t be an easy task, as is evident after SegWit2x fall.

The world’s largest exchange Chicago-based CME group has planned to impose limits on its proposed Bitcoin futures’ daily fluctuation, reports WSJ. Last week, the company had announced to launch Bitcoin futures in the fourth quarter of 2017. CME officials stated that the new contract will be cash-settled, based on the CME CF Bitcoin Reference Rate (BRR) which will serve as a once-a-day reference rate of the US dollar price of Bitcoin.

Leo Melamed, chairman emeritus of CME Group has stated that Bitcoin is more likely a new asset, such as gold or stocks, which can be traded by major investors and regulated, not simply a cryptocurrency.

CME has been using such limits in case of crude oil, gold and stock-market futures to halt trading if the swing gets out of control. However, Bitcoin’s price fluctuation has been beyond the textbook derivatives. The cryptocurrency has registered a $400-$1,000 price fluctuation within 24-36 hours in the past.

The Dark Web Of Bitcoins

The virtual currency is all about scripts and codes, where the scripts get real, and real coins get virtual. Lines are blurred. Last year, in one most acclaimed TV series, Mr Robot II, Phillip Price, CEO of E-Corp speculated “The problem here is hard cash is fading, rapidly. That’s just the way of the world right now and Bitcoin is spreading, and if Bitcoin takes over, we are all in a world of hell. It is unregulated.” Though his context was to promote E-Coins instead of Bitcoins, the concerns regarding Bitcoins are getting real. In addition to Bitcoins, the dark web crime of cryptocurrency has been on the rise.

In Canada, dozens of cases have been reported over the ongoing Bitcoin ATMs scams. Bitcoin ATM machines are being used by the fraudsters asking Bitcoins in the name of tax collectors from Canada Revenue Agency. The fraudsters have threatened victims with arrest warrants if they failed to deposit the demanded Bitcoins. According to CBC News, Since April, police say 45 people have been defrauded in York Region alone, so far.

In India, Delhi Police have nabbed a drug trafficking ring that was using Bitcoins to sell prohibited drugs online. The group was also distributing drugs to various parties.

It has been already reported how ransomware, CryptoShuffler, ICOs have opened a huge backdoor for cyber-fraudsters and hackers. The Chinese Bitcoin enthusiasts too have opened alternate ways for Bitcoins trading. After the ICO crackdown in China, the traders are now using encrypted platforms and mobile messaging apps that bypass exchanges there.

5,366 cases of damage from ransomware were reported in the January-September period this year, up 3.7-fold from 1,438 in the same period last year, reports Korea Herald.

Clearly, the focus should be on regulating the process, the trading and mining of cryptocurrencies and the ICOs, instead of banning them. Speaking to Yahoo Finance, U.S. Treasury secretary Steven Mnuchin stated, “The first issue, and the most important issue, is to make sure that people can’t use Bitcoin for illicit activities. So we want to make sure that you don’t have the dark web funded in Bitcoins. And that’s something that is a concern of ours today.” Mnuchin accepted the fact that the US government is closely monitoring the Bitcoin activities in the country and abroad too. This makes sense, as many of the Bitcoin codes were in fact developed by CIA developers in 1990s. 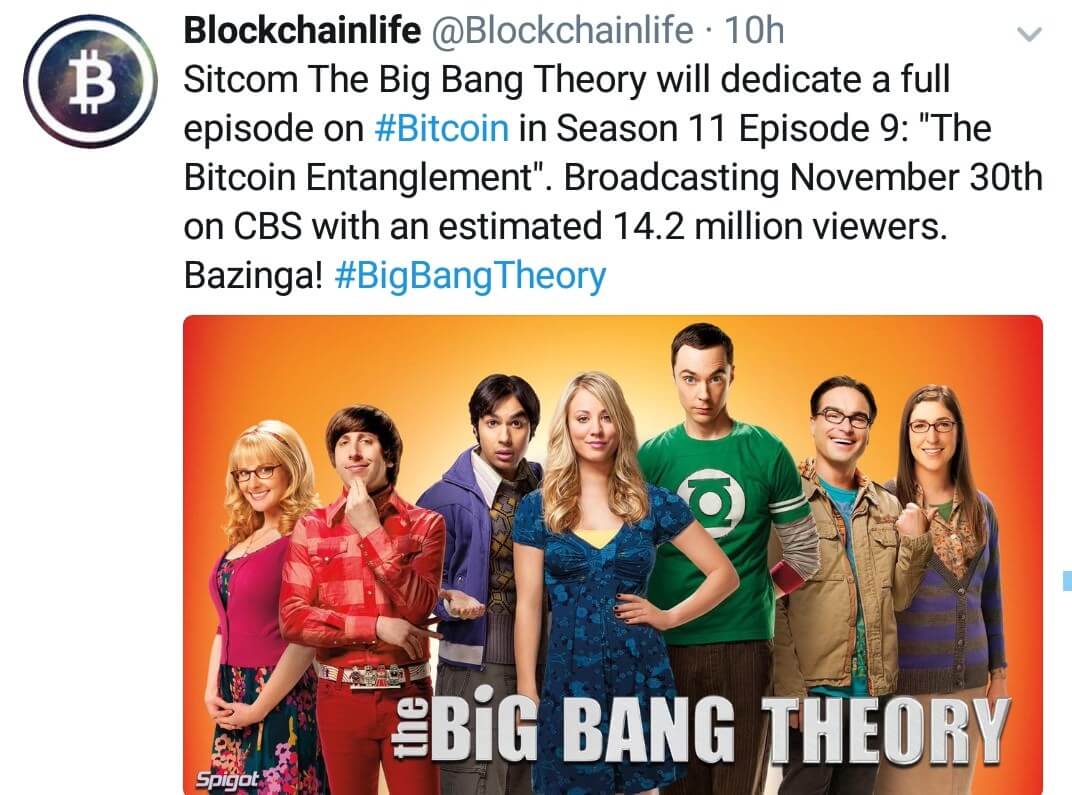 The SegWit2x hard-fork has been cancelled by leading architects, yet some enthusiasts have still kept the project going at bitcoin2x.org. Will they succeed to hard-fork? Only time will tell! The previous hard-forks stats are that Bitcoin Cash (BCH), hard-forked few months back, has now hit an all-time high $1,000 mark, while the other latest hard-forked cryptocurrency Bitcoin Gold is supposed to go live tomorrow. In India, people have still kept their fingers crossed on what decision will the Ministry of Finance / Ministry of Economic Affairs take. Meanwhile, encashing the Bitcoin’s soaring popularity, now the TV series ‘The Big Bang Theory’ has jumped on the Bitcoin bandwagon. The popular TV series is set to broadcast its much-awaited episode on Bitcoins named ‘The Bitcoin Entanglement’.

Stay tuned to Inc42 for more news on Bitcoins, cryptocurrency, and ICOs!