Important Happenings From The World Of Cryptocurrency, Bitcoins, ICOs And More [ 22 - 28 October] 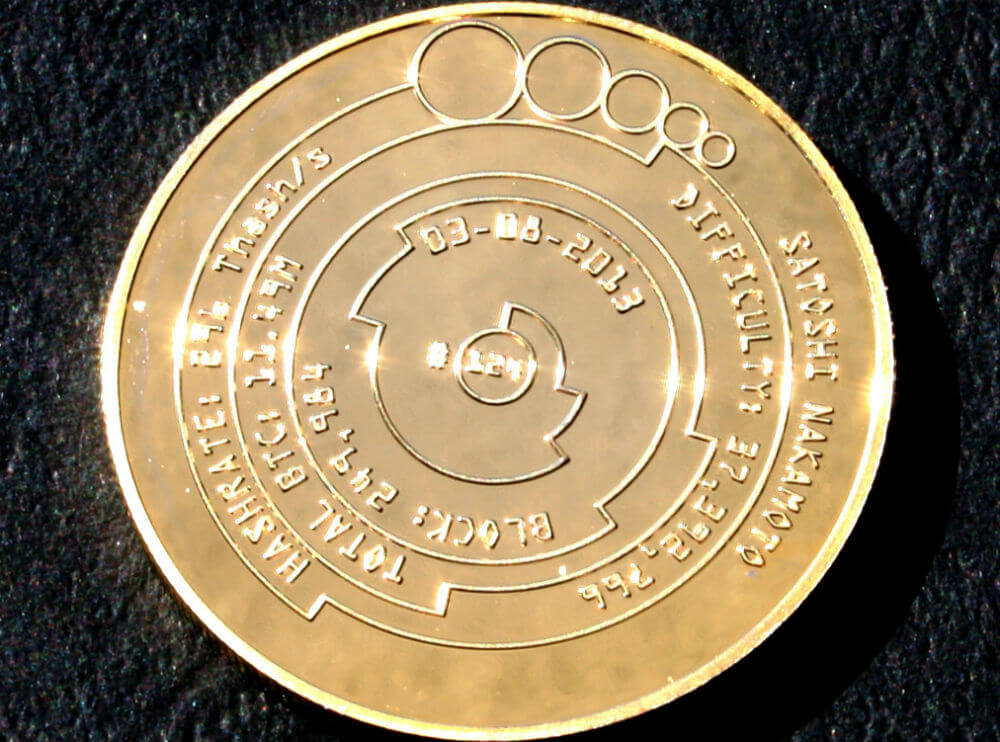 Bitcoin to Bitcoin Cash, and now Bitcoin Gold. Hard-fork has become an inherent part of cryptocurrency culture. Though Bitcoins being extremely bullish have successfully survived this hard-fork too, and shown an instant recovery of $300 after plunging to $5,380; however, with every hard-fork, currency vs commodity debate heats up and damages their trust value. Meanwhile, the Government of India has reiterated its previous stance regarding Bitcoins and cryptocurrency, saying its stance is still very much the same what RBI stated in its infamous statement in 2013. And, guess what, Warren Buffett is the latest entry to the Bitcoin bloodbath bandwagon.

3 Months And On, The Govt. Of India Is Still Sleeping On The Report Regarding Cryptocurrency

In response to an RTI vide DOEAF/R/2017/80648 seeking why Ministry Of Financial Services is not making Interdisciplinary Committee report regarding virtual or cryptocurrencies public while report on the digital transaction was made public instantly after its submission, Department of Economic Affairs has invoked provisions of Section 8 (1) (a) of RTI ACt 2005. It has stated that since the report is still under examination, the government of India can’t provide the copy of the same.

So, was the Interim Report of the committee of Chief Ministers on Digital Payments wasn’t examined at all? 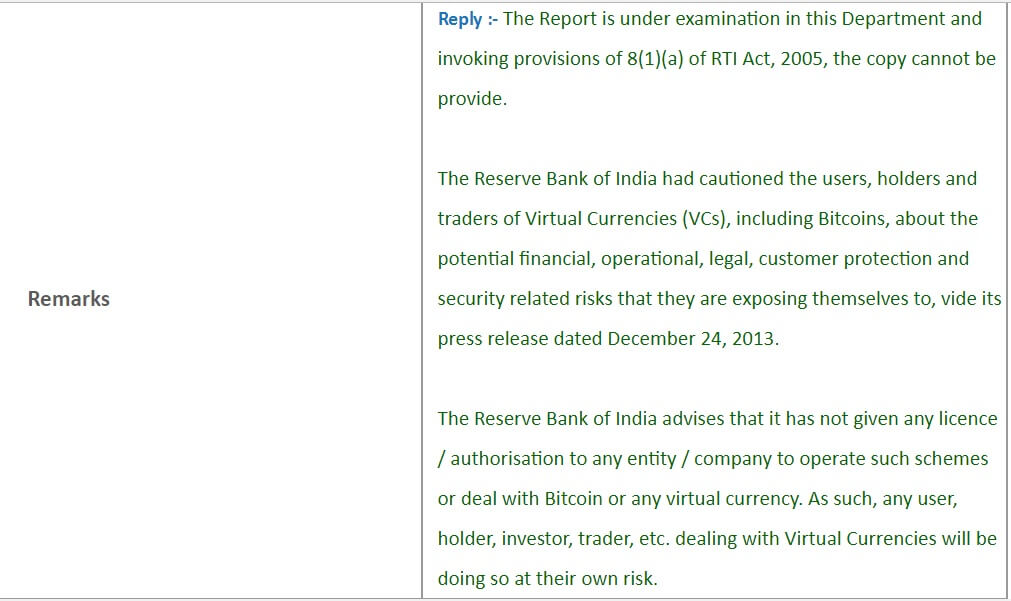 And, what is the current understanding of Government of India on cryptocurrencies such as Bitcoins and Ethereum? The response refers to the RBI’s statement dated December 24, 2013, which had cautioned the users, holders and traders of Virtual currencies (VCs), including Bitcoins, about the potential financial, operational, legal, customer protection and security related risks that they are exposing themselves to.

The curious case of the Indian government is that while Bitcoins with its disruptive technology blockchain has shaken the entire world in the last four years, it (government of India) is stuck with its 2013 statement.  And, as happened with China lately, a late and negative response to the cryptocurrency trading might trigger The Cobra Effect here too.

Recently, however, recognising the cryptocurrency’s importance, RBI Executive Director Sudarshan Sen had stated that RBI was considering to float its own fiat cryptocurrency. But he remained mum about its release date.

Back on July 31, 2017, while Chinese exchange ViaBTC encouraged and backed Bitcoin Cash hard-fork, it’s a Chinese again, with another hard-fork. Yes, at a time when new cryptocurrency startups like Coinlancer have introduced pre-mined cryptocurrencies in the market citing mining as an irrelevant job, Chinese cryptocurrency enthusiasts are more fascinated with the mining than trading. On October 25, 2017, Chinese miner Jack Liao abruptly made a hard-fork and introduced another coin called Bitcoin Gold citing an adjustment of Bitcoin Blockchain to make mining accessible to general public.

In contrast to Bitcoin’s ASIC mining, Bitcoin Gold’s mining is based on GPU/CPU. However, while Chinese exchanges have already shut down their services, the Bitcoin Gold hard-fork has not received any favour from the Bitcoin and cryptocurrency community at large owing to the lack of replay protection. The protection helps stop an attacker stealing coins from someone’s wallets. 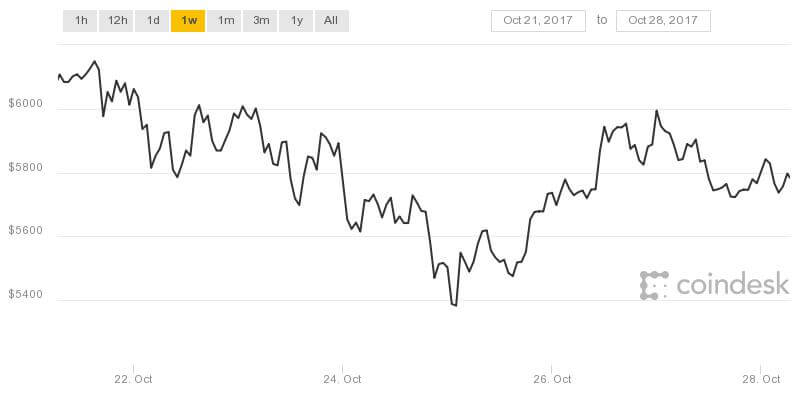 The hard-fork did hit Bitcoin to an extent what China banning ICOs news did. Bitcoin that was trading at $6,148 on October 21 plunged to $5,382 amid hard-fork news. At the time of writing this, Bitcoin was trading at $5,767. It is to be noted that Bitcoin is scheduled to undergo another Segwit2x hard-fork on November 16, 2017.

Bitcoin Fallen In ‘The Bubble Territory’

Veteran Investor and Billionaire Warren Buffett is skeptical about Bitcoins in the longer run. At Omaha, while delivering his periodic master-class and Q&A session, Buffett said, “You can’t value Bitcoin because it’s not a value-producing asset.” Adding that Bitcoin has emerged as  “real bubble in that sort of thing,” he is not very enthusiastic about ICOs too, “People get excited from big price movements, and Wall Street accommodates,” opined Buffett.

It’s no secret; Bitcoin could never impress Warren Buffett to the extent where it could change his opinion. Previously the investor had said, “It’s a miracle…to think it has some huge intrinsic value is just a joke.”

For every argument, there is a counter-argument. It’s true, Buffett is one of the most reputed and widely accepted wise men in the existing market, and unlike JP Morgan Chief Jamie, his worries regarding Bitcoins can largely be true, as most of the governments have not come forward to support or recognise Bitcoins; but so is Bill Gates who said, “Nobody can stop Bitcoin.”

While a formal statement from the bank is yet to be released, Noh said, “It is difficult to look at the example of the International Settlement Banks (BIS) in terms of money. However, its regulation is appropriate because it is regarded as a commodity.”

In the past five years, despite Bitcoin Cash and Bitcoin Gold hard-fork, Bitcoin trading at $7.5 in 2012 has registered an unprecedented growth of more than 76,000%. However, the love and hate relationship with the authorities across the world continues. Strangely, while most of the economists and governments across the world agree to the fact that blockchain is the most transparent, trustable and distributed ledger, they proclaim Bitcoins which is based on the very same technology as a private entity. And thus the founder of Bitcoins and blockchain, Satoshi Nakamoto is yet to be given his due credit.

Stay tuned to Inc42 for more news on cryptocurrencies…