Gandhi added that his party will ‘tweak’ the ecommerce policy While addressing entrepreneurs in Bengaluru, All India Congress Committee (AICC) president Rahul Gandhi said that his party will do away with angel tax if voted to power.

Gandhi’s statement came as a response to an angel investor who said that the entrepreneur’s community is being treated like tax evaders while notices are being sent to the companies they are investing in, during the Indiaprenuer event held on March 18. 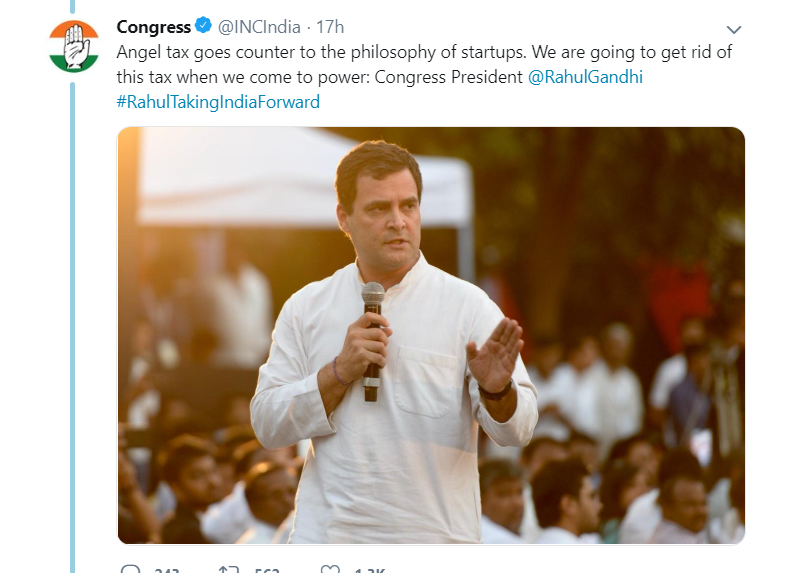 According to the angel tax law, startups are to pay around 30% of angel tax on investments made by external investors. Earlier this month, The Central Board of Direct Taxes (CBDT) had said that startups which received assessment notices under Section 56(2)(viib) of the Income Tax Act (I-T Act) will be exempt from the tax only if they comply with the February 19 notification.

On February 19, the Department of Promotion for Industry and Internal Trade (DPIIT) notification had said that, all startups are liable to receive angel tax exemption regardless of their share premium values given that the aggregate amount of paid-up share capital and share premium of the startup after issue or proposed issue of share, if any, does not exceed, INR 25 Cr.

However, the notification failed to address certain gaps. For instance, startups who received the assessment, orders will continue to fight the battle.

While addressing the crowd at the Manyata Tech Park, Bengaluru, Gandhi also added that his party will also make necessary changes in the ecommerce policy to ensure that it is fair to all stakeholders.

In response to an entrepreneur who voiced his concerns related to the restrictions placed on ecommerce entities, the Congress leader said that a balance has to be ensured between large and small players.

The DPIIT had introduced Draft Ecommerce Policy on February 23 in order to ensure a level playing field for both large and small players. The policy has proposed regulation of cross border data flows and enabling sharing of anonymised community data.

Further, the new FDI norms in the ecommerce policy which came into effect from February 1 prohibits any etailer to sell products from companies where they own a stake. The rule also directed that marketplaces will not mandate a seller to sell products exclusively on its platform. The rules also prohibit marketplaces from making more than 25% of purchases of a vendor.

Following the implementation of the policy, two major players investing in the Indian ecommerce companies, Amazon and Walmart’s have together lost $50 Bn in market capitalisation.

During the event, Gandhi also said that rural people need to be brought in contact with the ecosystem and connect them to those who have built businesses, This will help in the development of rural entrepreneurs.

Gandhi’s Remarks On The Ruling Party

Just ahead of the elections, Rahul Gandhi also highlighted the urgent need of jobs in India. He added that the small and medium business (SMB) sector has the potential to address the unemployment problem in the country and produce more jobs. He also emphasised on the urgent need for opening up the banking system to these small and medium businesses.

Meanwhile, Gandhi also attacked the ruling government over the sudden implementation of the GST. 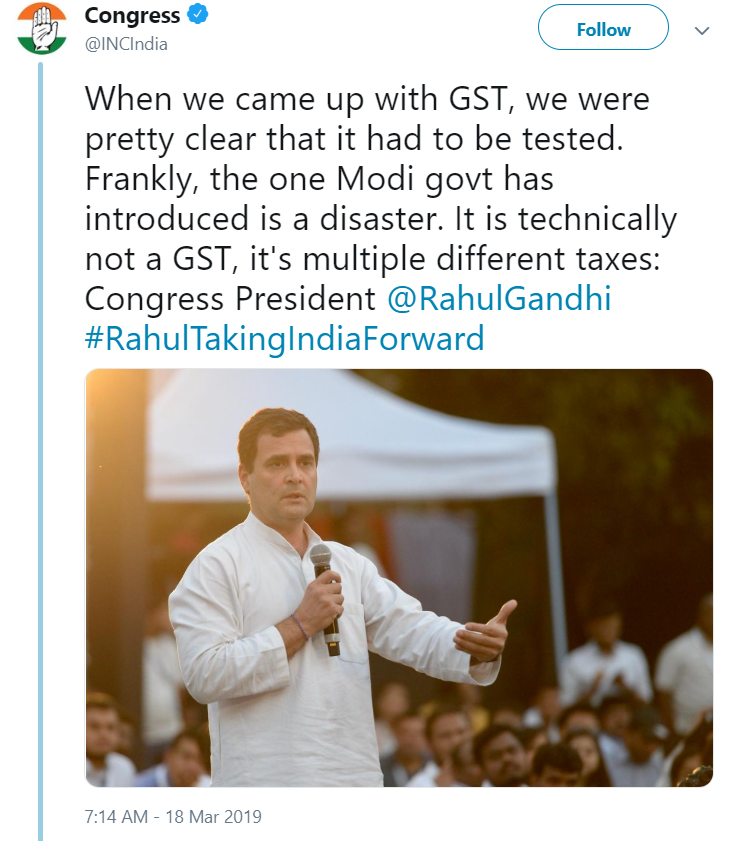 Calling the current GST rule as a disaster, Gandhi said that the party will get rid of the existing GST and reform it to a simple GST rule.