Chat Is Eating The World

Chat Is Eating The World 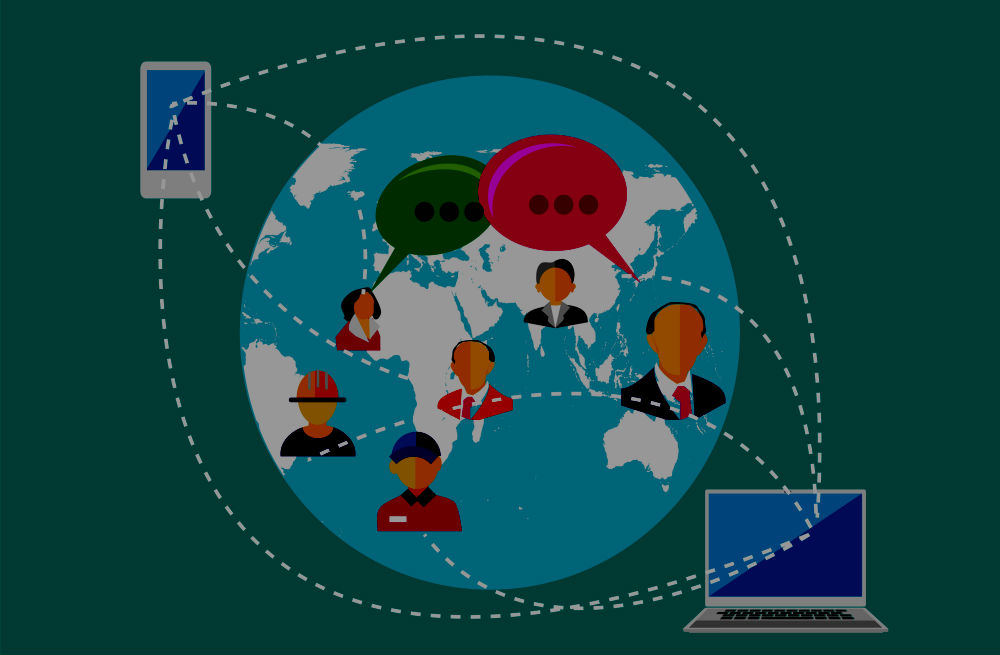 Chat is eating the world. In one form or the other, it most definitely is. Day by day much people are discovering that, chat platform is not just a world in which they can interact with people but also a platform for accomplishing various day to day tasks. Chat is becoming the main medium through which we get things done. Every new app that is being launched comes with a learning curve. This is where the chat apps have an extra edge over the other apps since it bypasses this barrier owing to their simple one user interface. And that’s why, it is the second largest medium of communication in the world.

Chat apps are now platforms in their own right. Instant messenger services and chat apps continue to show impressive growth patterns, with WhatsApp, WeChat, Facebook Messenger and Snapchat reporting more than 100 million new monthly active users over the past 12 months.

According to the KPCB Internet Report 2015, 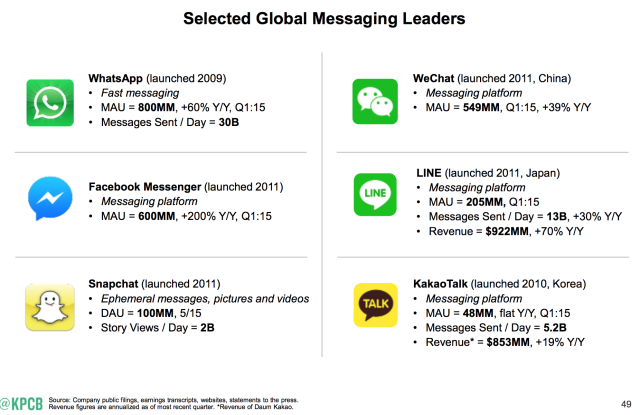 A chat interface isn’t just limited to texts, it enables a two way conversation to get tasks done. These “tasks” can be anything starting from conversing to booking a cab and even ordering food. What if instead of downloading an app for every single purpose, we have one app through which we simply chat with a service for a quicker, smarter response?

During my tour to China, I was amazed to see how people were using WeChat for everything. I experienced it on my own when I booked a cab through WeChat. That’s when I realised that the experience of most products/services differ from region to region. In India, WeChat is very limited in its platform play, whereas in China an entire new world of services and startups are dependent on Wechat to build traffic. Starting with ordering groceries to booking appointments, I used WeChat throughout my stay in China. According to a study by the China Academy of Information and Communications Technology,

Like how WeChat rules in China, Line became a culture-changing phenomenon in Japan. Line probably reaches about one third of the country’s mobile phone users. About 86% of the 74 million users is active on a regular basis. About 40% of registered users are active everyday.

Meanwhile in most of the other countries, everyone is hooked with Slack , an app that lets you communicate effectively with your colleagues. Slack gives you the feel of an office atmosphere at your fingertips. It eliminates a tonne of redundancies of various forms and allows people to easily work together through chat rooms. It helps to organise all team conversations in open channels enabling everyone to have a transparent view of what’s going on. It’s fascinating to know that all this time we have been growing alongside chat rooms. Chat platforms were slowly inculcated in our lives starting from Yahoo Messenger to Snapchat.

Snapchat, primarily a photo sharing application, has now started adding functions like Snapcash payment, a fast and easy way to exchange money within the Chat interface. Transferring cash and paying bills have become that easy due to the drastic development in chat interfaces.

In the US, Magic another service, allows you to order “any on demand service” simply by sending a text message. It promises no hassle, simply because you text a human concierge. While Magic is a text messaging service, Operator is an application. Registered users can make a request for any type of item like a coffeemaker or running shoes and then an online sales representative called an “Operator” will chat with the user to hunt down relevant products from all over the Internet.

Founder of the largest messaging app, Whatsapp, Jan Koum was born in a small town in Ukraine called Kiev. He moved to the US with his Startup ideas and while working on it, he discovered that there is no easy way to get in touch with people from other countries other than through expensive phone calls. That’s how he used the chat platform to give birth to Whatsapp. And now Whatsapp groups remain to be the primary source of connectivity for all families across the globe.

The thought of connecting the producers to the consumers was very appealing for they could solve the ever existing problems of miscommunication, time lag and several other redundancies through chat. I strongly believe that the Chat platform is the way forward to answer people’s queries, albeit with a personal touch.

Chat platform is creating a big revolution in the global retail market and it is evident that the chat interface is becoming an integral part of this modern conversing society.