Change Won’t Come From The Govt. But From The Young Entrepreneurs, That’re Making A Difference On The Ground: Raje

Change Won’t Come From The Govt. But From The Young Entrepreneurs, That’re Making A Difference On The Ground: Raje 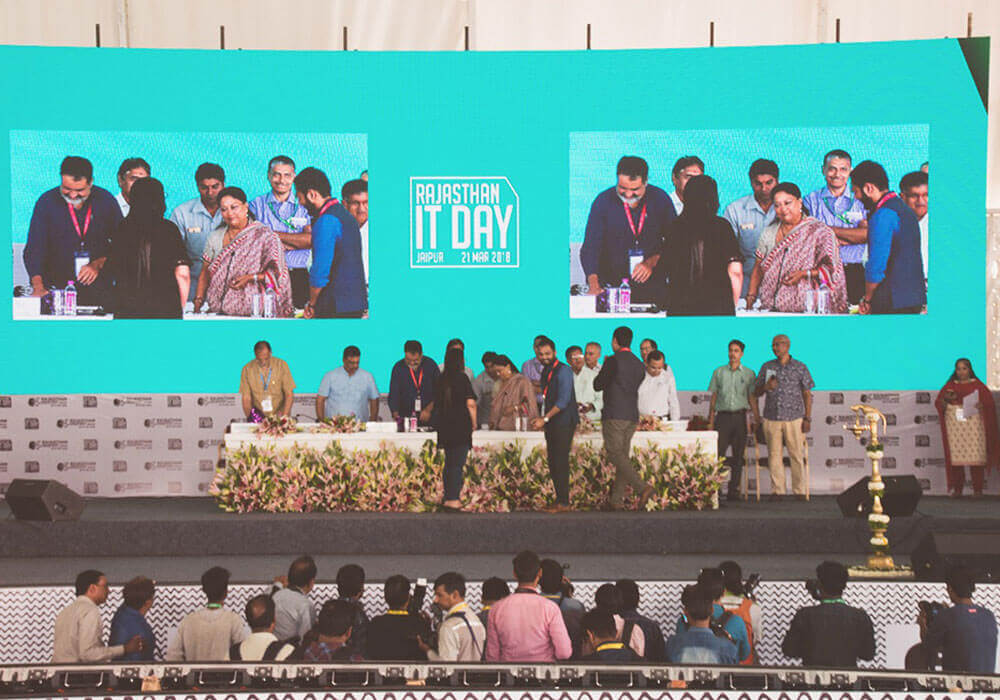 As more than 5,000 participants gathered to take part in the Hackathon 4.0 during the Rajasthan IT Day mega event in Jaipur, IT veteran turned angel investor Mohandas Pai called it a triggering point for the pink city which is turning IT. “Such a vast gathering for an IT event in Jaipur. This hasn’t happened in Bengaluru or Mumbai, but Jaipur,” stated Pai.

Impressed with Rajasthan Chief Minister, Vasundhara Raje’s pledge of making Rajasthan famous not just for its tourism spots but also for a homely state for startups and IT companies, Pai on a fireside chat with Raje asked, “After coming to power, you went all the way to Infosys, Bengaluru campus asking IT companies to come to Rajasthan. Today, there is Mahindra World City in the state providing employment to 15K people. What makes you believe in the power of IT?”

CM Vasundhara Raje has been quite vocal about the potential of IT and the availability of the startup ecosystem. Responding to Pai, Raje stated, “The IT helps us monitor government activities; it helps us actually cut away all the unnecessary things that we are not required to do and it also allows us to act for the people directly.”

Pointing out how the IT could enable the government’s social campaigns of women empowerment too, she added, “I believe that the IT can bring a vast change in the lives of people especially women, young girls were what I was looking at, honestly, Mahindra World City is just the first step in the right direction. I don’t think in Rajasthan, we have looked back since then.”

Earlier a 4-member team of Inc42 had went on a road trip – the Digital Rajasthan Yatra to six major cities of Rajasthan covering the entrepreneurship and technology spirit present at every level of the society there. At the occasion, Raje also released Inc42 team’s detailed analysis of the state’s IT, egovernance, and startup ecosystem.

Sharing the story of the making of the IT state, Raje explained the pain and gain that her government had to go through to win the ‘best state award in IT&C and e-governance’, “When we first tried to start with the Bhamashah Card Yojna, there was no bank that wanted to strike a deal with us. There was not even enough plastic to make the required number of cards. However, slowly and steadily, the change came. And you will be surprised to know that today, 15 Mn families in the state are using Bhamashah cards. Approximately, $2.3 Bn – $3.06 Bn (INR 140-150 Bn) are now transacted through the banks, it’s a huge achievement. Today, thousands of eMitras in the state are providing services to our people.”

On young entrepreneurs mushrooming in the state, Raje said, “And, I am so delighted to see the youngsters involved in it. Because the change is going to come not from here (the government), but there (the youth).  Somebody has to go out and make the difference on the ground level.”

Later, speaking with PTI, Pai opined, “Startups do have future, however, 60% of them may fail owing to lack of market and other factors.”

The four-day event starting from March 18 hosted five major programmes targeting the different community of individuals. This includes TechRush, Hackathon 4.0, Eduhack, Green-a-thon and eMitra/ITGK Connect.  As per Inc42 DataLabs, over 30 Rajasthan startups secured $148 Mn between 2014-2017. Further, the total number of startups in the state has now reached 750, an 83% rise from 410 (approx) startups estimated in 2014.