With Champions Of Change, PM Narendra Modi Signals Commitment Towards Working With Startups, Entrepreneurs For A New India

With Champions Of Change, PM Narendra Modi Signals Commitment Towards Working With Startups, Entrepreneurs For A New India 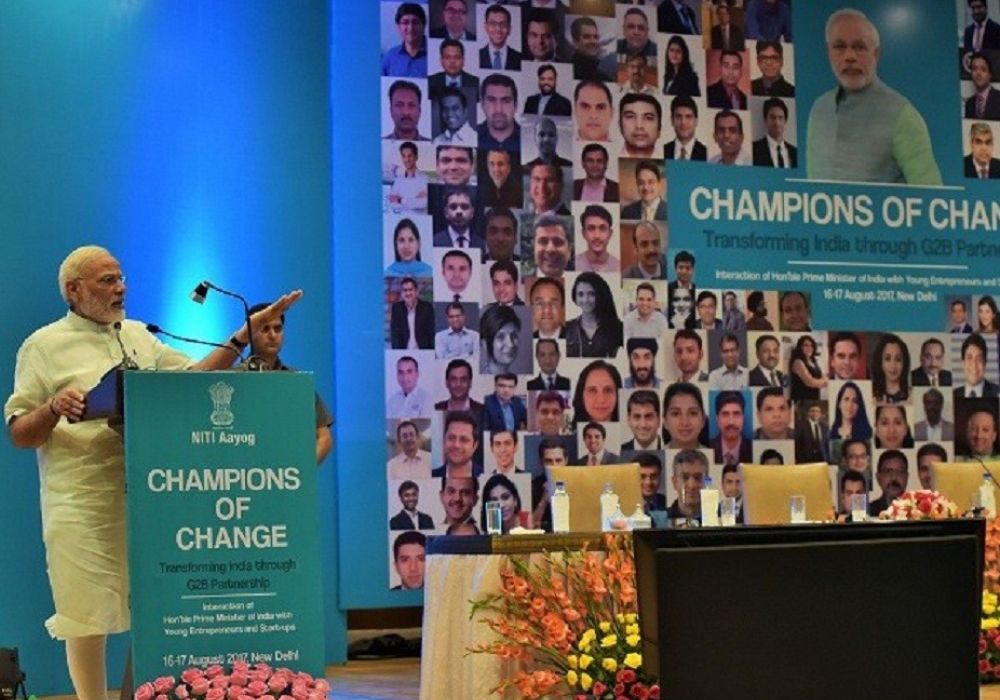 “Innovation is life. When there is no innovation, there is stagnation,” stated PM Narendra Modi, at the Champions Of Change event being organised by NITI Aayog in the capital. It is probably with this thought, in mind, that Prime Minister Narendra Modi and NITI Aayog have met over 200 startup entrepreneurs since last week and will be meeting more today. The event aims at creating a dialogue between the government and startups in order to get them in sync with the PM’s mission of a ‘New India by 2022’. 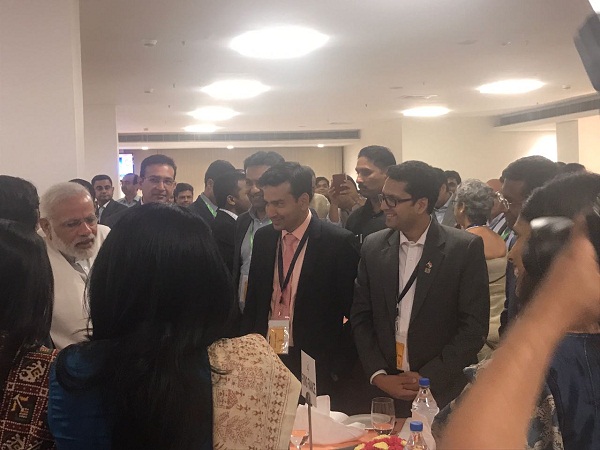 The government has shown innovation in more than thought, this time around. For startup  entrepreneurs, who walked into the event expecting it to be yet another discourse from the government, it turned out to be a pleasant surprise where everyone from the government, including the PM, the secretaries, and the ministers were accessible and eager to listen to their views in a very informal, private manner.

Diverting from the boring format of one-way discussions and speeches from the government, the event was modelled on a corporate event. Where groups of 35 people brainstormed on the six chosen themes – New India, Make In India, Cities Of Tomorrow, World Class Infrastructure, Doubling Farmers Income and Fixing Finance. 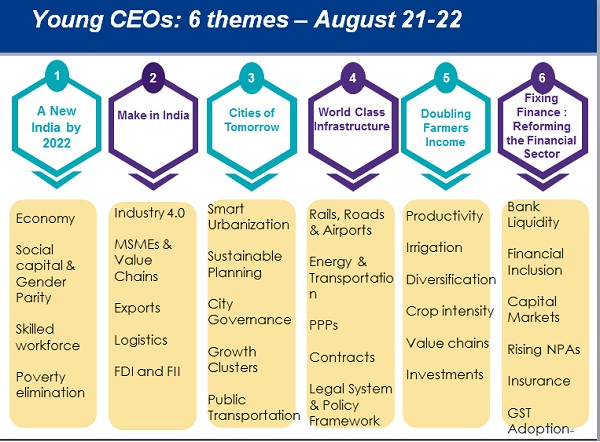 The groups’ objective was to brainstorm and come out with the most impactful suggestions on those topics which would then be presented to the PM in the 10 minutes allotted to them. The action points had to focus on job creation, income enhancement, technology disruption and innovation, ease of doing business and governance and policy. 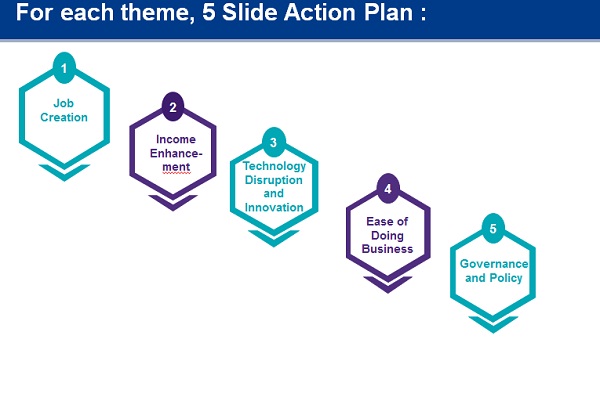 The participants were in for more surprises.

Like any serious corporate meet, the diverse group of startups could even throw a volley of questions to senior cabinet ministers. This included Finance Minister Arun Jaitley through the PollEv.com app, where the upvoted questions were answered live by the FM. Taking their intent a step further, Prime Minister Narendra Modi even joined the 200 young business leaders for an informal interaction later in the evening, spending a few minutes on every table to listen to whatever suggestions young startup entrepreneurs had to give.

At the event, PM Modi stated, “With changing times, we have to change our processes and systems.” While the implementation of this thought will be revealed in due course of time, at least with the seamless execution of this event, the PM made his intent very clear to startups. It was an eagerness on the part of the government to receive suggestions and feedback to create policies that would have a lasting socio-economic impact. And an affirmation that it could not do so alone, and would rather enlist the support of some of the country’s brightest and innovative minds.

Dev Khare, Managing Director at Lightspeed India Partners Advisors, welcomes this approach. Dev who was a part of the Fixing Finance group told Inc42, “Given the right access and opportunity to impact life and business across the country, Indians across all walks of life are excited and proud to contribute towards building a significantly better India.”

Champions Of Change: A Bridge Between Startups, Entrepreneurs And The Narendra Modi-Led Government

With Champions of Change, the PM has expressed his intention to work together with the young entrepreneurs for India’s good. Thus, as a part of this dialogue, entrepreneurs were able to discuss everything under the sun  — from jobs creation, to ease of doing business, climate change, tourism, health care, Make in India, doubling farmers’ income by 2022, innovation, smart cities, and skilling.

So, for instance, those grouped to give suggestions on “fixing finance” brainstormed on topics like how to increase financial inclusion, paperless access to financial services, and. moving towards a cashless society. They were also asked to suggest reforms in the banking sector, insurance and capital markets, and how to bring about the enhancement of skilled workforces in the financial sector and create more youth employability.

Abhishek Sinha, CEO of Eko India Financial Services, who was a part of the Fixing Finance group told Inc42 that this is indeed a unique event as, for the first time, top political leadership has spent meaningful time with the entrepreneurs.

Abhishek said, “It is also unique because the political leadership has been on the listening end. As far as Fixing Finance is concerned, I am looking for the government to act on the suggestions as it will lead to massive retail participation in financial services including micro-savings, micro-credit, micro-pension, microinsurance and micro-mutual funds.”

He added that this can come on the back of a proposed disruptive start – early financial literacy initiative and technology-led unbundling of services to create a sachet category of products, especially for the low-income customers.

Abhishek’s confidence is not unfounded. The PM, at this event, made it amply clear that the government was serious about putting these ideas into execution.

For instance, PM Narendra Modi himself acknowledged that while good ideas are important for development, there is also a need to work on their execution. He said, “Along with good ideas, let us work towards the road map and institutional arrangements to fulfil the ideas.” 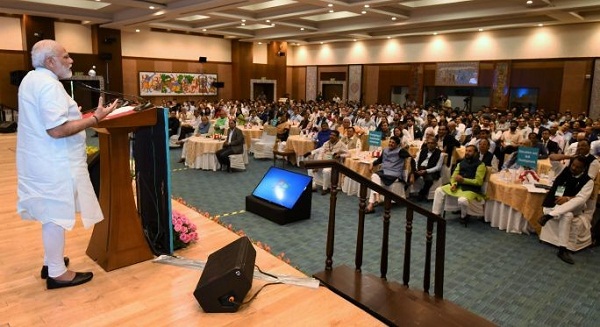 And it is probably with this intention in mind that he stated that the different groups of entrepreneurs, which were set up to suggest policy initiatives, could be attached with the relevant ministries on a permanent basis.

Anu Acharya, CEO at MapMyGenome seconded this thought. Anu told Inc42, “I think bringing together entrepreneurs, multiple secretaries, ministers and the PM was a great idea and some good ideas were strung together. However, as policymakers worldwide have seen, the devil is in the details.”

Adding further as to how the discourse would specifically help the area of healthcare in which MapMyGenome operates, she said that it was great to meet other entrepreneurs, the secretary and the minister. She hopes that the conversations that they had could be continued further.
On a lighter note, she added, “Also, I have begun to appreciate the difficulties the bureaucrats face.”

Anu is not alone as far as the realisation part is concerned. Because in his speech, PM Narendra Modi himself said that every citizen has something or the other to contribute to the nation. And in the PM’s words, the government has realised that it wants to “integrate these strengths with our (India’s) growth.” A move that has been welcomed by many participating startup entrepreneurs.

Gaurav Munjal, co-founder of Unacademy spoke to Inc42 regarding his Champions of Change experience. “Before, I believed that it was only entrepreneurs who would change the world. I used to think that governments don’t understand entrepreneurs. Meeting the PM at the #ChampionsofChange event turned this (thought) upside down.”

Gaurav added that, if implemented well, the recommendations on mobile learning will revolutionise access to education at an all-India level. They will also help the government prepare for upcoming challenges such as skills getting outdated and mass digitisation of courses.

Amit Sachdev, CEO of online lending platform CoinTribe reiterated that Champions of Change is a clear signal of the government’s intent to truly transform India. Amit told Inc42, “NITI Aayog has set up the perfect platform to define the transformation agenda of the country, leveraging the knowledge and skill sets of 200+ CEOs from across the industry spectrum from the largest automobile manufacturer to a small fintech company. The deliberations were thought-provoking and, the defined agenda, when implemented will surely catapult the country in the next growth orbit.”

He added that the next step should be to keep this a regular affair, keep tracking the progress of the agenda and refine where relevant.

Amit makes a valid point as PM Modi himself acknowledged the importance of execution. He said, “It’s possible that despite very good ideas and suggestions, the system may not have the capacity to accept them. But, gradually, its capacity to digest, to accept, will increase. Then the good schemes will come forward and they will be accepted, if you associate yourself with us, with this feeling.”

With all this discussion about a new India and more job creation in a more participative, and intent-driven format, PM Narendra Modi has signalled that the government is serious about more participation from startups as its Champions of Change for a New India. At the very least, during its initiation, Champions of Change has made a mark. It remains to be seen how substantial will the follow up be when it comes to real, ground-level execution of the ideas submitted by entrepreneurs in this initiative.