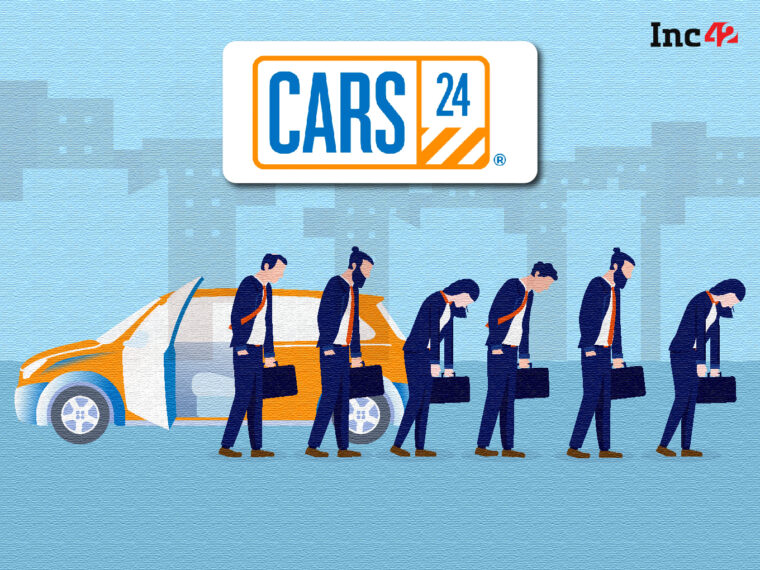 As per Inc42 sources, the startup has mostly laid off employees from lower positions

The layoffs have been done majorly to cut costs, the source added

After Vedantu, Unacademy and Meesho, now IPO-bound automobile marketplace Cars24 has laid off around 600 employees in the past couple of weeks. The startup has mostly laid off employees from lower positions across divisions.

Inc42 sources requesting anonymity have confirmed the development and hinted that most of the layoffs had taken place because the startup was looking forward to further automating operations and cut cost. With this layoff, Cars24 has let go 6.6% of its total employee count of around 9,000 staff.

Cars24 spokesperson confirmed the development with Inc42 and said, “This is business as usual- performance linked exits that happen every year.”

Since September last year, the SoftBank startup has raised $850 Mn. The layoffs come almost five months after it raised $400 Mn at a valuation of $3.3 Bn led by Alpha Wave Global. Prior to this round, it had raised $450 Mn from DST Global, Falcon Edge and SoftBank Vision Fund at a $1.8 Bn valuation.

Speaking to Inc42 in January this year, Cars24 founder Gajendra Jangid had said that the company is looking to achieve $2 Bn in revenue by FY23 by banking on its international expansion plans. The company also had plans to further its diversification beyond the ‘cars’ marketplace into bikes, and grow its used car financing platform.

“We are making money on a unit economics level, but overall we are not EBITDA positive. With enhanced focus on unit economics, and the scale at which we are looking to expand, not just in India, but internationally (eyeing 10% of the Indian market share in this year alone), we are looking to turn profitable pre-IPO,” Jangid had said.

The startup is eyeing for an IPO in the next 18 to 24 months, thus joining the list of Indian startups waiting to taste the public market. Cars24’s Singapore entity had converted into a public company late last year.

Cars24 Services Private Limited which operates Cars24 in India has incurred a loss of INR 175.5 Cr on a standalone basis in FY21. During the same period, the startup had generated revenue from its sales worth INR 2,731.6 Cr, while its total expenses were pegged at INR 2,946.4 Cr. The startup’s employee benefit expenses which mostly comprise of employee salaries, PF contributions, and other employee welfare benefits was INR 196.6 Cr.

The development has come in the backdrop of several funded startups laying off employees mostly to achieve profitability, mitigate cash crunch or when unable to secure new funding round.

Since January, Indian startups have laid off about 3,000 employees (including Cars24). The layoffs in the startup ecosystem this year started with edtech startup Lido laying off around 150 employees that was followed by unicorns Unacademy, Vedantu, and Meesho.

Until now, Gaurav Munjal-led Unacademy has laid off 925 employees in the first five months of 2022. Just yesterday, another edtech giant Vedantu said it had laid off around 624 employees, almost 10% of its total headcount.