With A Less Than 1% Rate Of Defaulters On Its Portfolio, Capital Float Aims To Deep Dive Into The $500 Bn SME Lending Market

With A Less Than 1% Rate Of Defaulters On Its Portfolio, Capital Float Aims To Deep Dive Into The $500 Bn SME Lending Market

Gaurav Hinduja and Sashank Rishyasringa hardly came from the domain they were trying to revolutionise – online lending.

“But we were both excited to come back to India to start a business which did three things – had an impact on the environment for entrepreneurs within the country, leveraged technology to build scale, and create scale on a rapid pace within the organisation,” begins Gaurav.

Before going for an MBA to Stanford, Gaurav was running operations for his family business named Gokaldas Exports, an apparel exports company. Sashank, meanwhile, had been working with Mckinsey for four to five years in New York and the Middle East. But despite that, fintech seemed an exciting sector to the duo for two reasons.

“It was mid-2012 when we saw the entire fintech sector really blossom in the US with companies like Lending Club. We wanted to deep dive into that sector in India and realised very quickly that the sector was very under-penetrated by the formal banking system. Indian financial institutions cater to a business of about $150 Bn debt, but currently there is $300-$500 Bn gap being serviced by the informal sector such as money lenders, chit funds etc. That’s where the problem got us excited because there was no incumbent technology to solve this problem and the size of the problem was huge,” explains Gaurav.

But breaking in was hardly a cakewalk.

The initial challenge the duo faced was that of recognition – at that time fintech and online lending was almost unheard of in India. So when they started Capital Float in 2013 – a lending platform that provides working capital for SMEs – the common reaction they got from VCs and other players in the ecosystem was that online lending will never work for India as SMEs are not typically digitally savvy enough. To add to it, unsecured loans are risky.  There was scepticism about the viability of the model as well.

Also, when it comes to building a fintech startup in India, challenges lie in working with the existing data sources and also aggregating new data sources that are emerging. For eg. in the last year,the Aadhar card has emerged as a very exciting data source. But for the startup, it was definitely a challenge to aggregate and analyse the data from it. Building a highly scalable and cost efficient way of sourcing borrowers across the country remains another challenge. 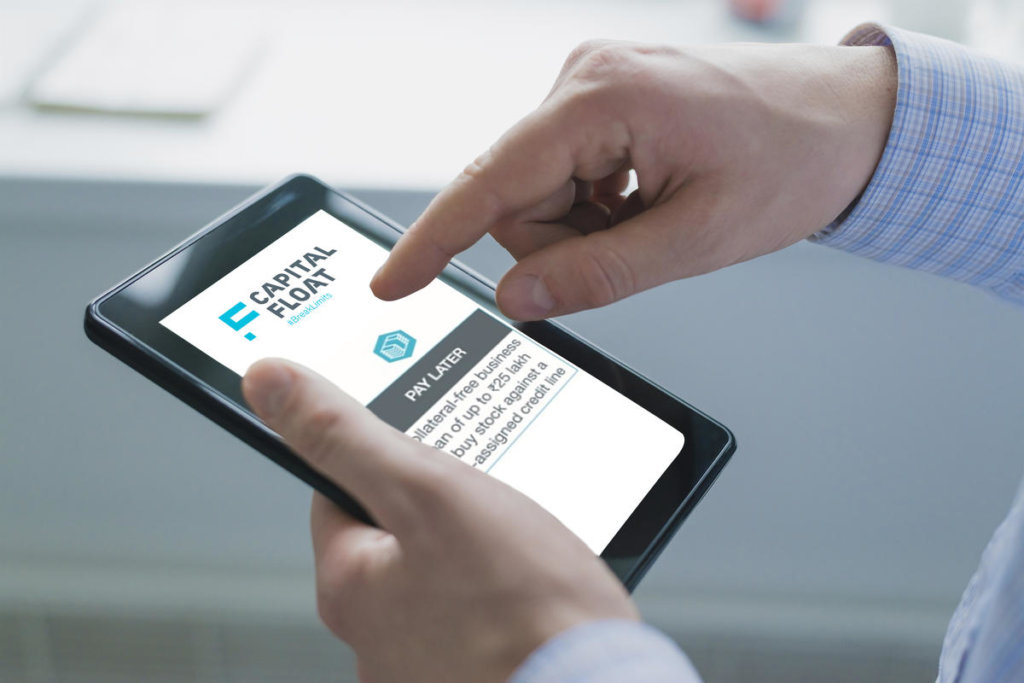 Then, figuring out the right entry point into the SME segment was another hurdle. SME lending is a massive sector in India and Capital Float got its foot in the door through ecommerce. Says Gaurav,

“This was early 2014, when ecommerce marketplaces had started to take off and we saw there was an opportunity to finance the merchants who were coming on to these marketplaces. That’s when we partnered with a lot of ecommerce majors like Amazon, Snapdeal, and eBay among others and created unique products specific for online sellers. Today also, we take this approach of identifying unique market niches and opportunities for credit.”

He adds that the duo’s perseverance in their belief – that 2013 was the right time to get started, that the market would soon catch up, helped them through the trying time. Given the circumstances today where there is so much talk about fintech and online lending, the founders are happy that their original convictions were validated.

And they have good reason too. With reportedly over INR 800 Cr ($118 Mn)of loans disbursed to borrowers in over 100 cities, no one is now questioning the validity of the model.

While there’s hardly an SME that would not shy of timely credit, Capital Float’s thesis was trying to identify certain segments of SMEs which had credit score and were data-rich.

Says Sashank, “We believed there was a large population of SMEs in India that were unable to get loans from banks but actually had a significant data footprint because of their engagement with the formal economy. This could be data garnered by selling online or Government data like Aadhar or credit data like CIBIL ( Credit Information Bureau (India) Limited) score.”

So, by and large, the startup looked at a combination of a few things – the digital footprint of the SMEs which means how much is it transacting on the ecommerce platform, what are the seller’s reviews and rejections on the platform. Then it also looked at the more traditional data in terms of credit bureau scores, bank statements. Thirdly, it scoured more unique data such as social media credit scoring, psychometric customer segment, and others depending on the product it was selling. Thus, across all segments in which it operates – be it loaning to sellers, Uber drivers, ecommerce, or B2B commerce, the duo estimate the market size to be anywhere between 7 Mn-10 Mn enterprises.

It is for his reason that Capital Float has tailored products for all such segments such as Merchant Cash Advance, Online Seller Finance, Pay Later, Invoice Finance among others.

Merchant Cash Advance gives loans against card swipes as businesses are actively using card payment machines to offer convenience to their customers.  Merchants can receive finance up to 150% of their monthly sales from card swipes.  For instance through Taxi Finance – Capital Float claims to offer the lowest down-payment in the industry, helping cab drivers to own and drive their own taxi on taxi-aggregator platforms like Uber.

Pay Later, another unique offering, is a collateral-free credit facility that allows the borrower to make multiple drawdowns within a credit limit. The borrower can make bullet repayments and reset the credit balance, making this a rolling loan facility. Interest is charged on the amounts that are drawn down and not on the entire credit limit.

Capital Float claims that since the target segment is familiar with technology and has some sort of digital footprint, adoption has been encouraging. Till date, it claims to have disbursed over INR 800 Cr of loans to about 5,000 SMEs and customers across the country. As far as geographical spread is concerned, it reportedly has borrowers in over a 100 cities, with a major proportion in Tier II, III cities.

The minimum loan the platform lends starts at INR 50K while the maximum can go upto INR1 Cr but most loans sought fall in the bracket lie between INR 7 Lakhs-INR 10 Lakhs. The interest rate on these loans varies from 15%-20%. 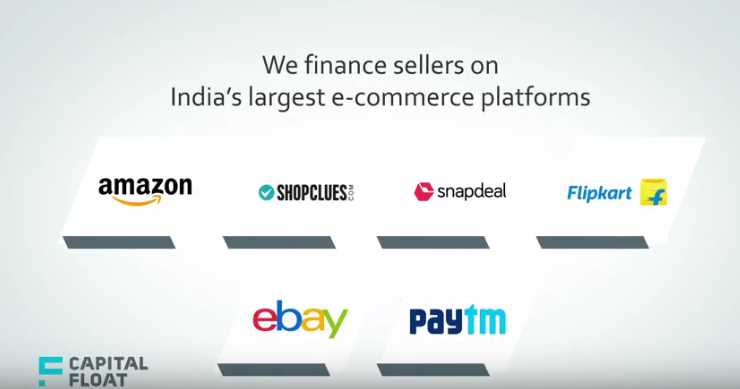 The startup monetises through two primary revenue streams. One is the yield or the interest that it charges on the loans and the second is the origination fee on recharge of loans. These rates are in the range of 15%-19%, at par with industry benchmarks.

The Bengaluru-based startup has raised over $42 Mn in funding in its Series A,  Series B, and Seed rounds from the likes of SAIF Partners, Sequoia Capital, Aspada Investment Company, and Creation Investments Capital Management. Adds Sashank, “When building a fintech startup in India, it is a challenge to mobilise the kind of capital that is required on the supply side to be able to scale up digital lending. Hence it is very difficult to bootstrap in this business given that you in are in the business of lending money to start with.”

Which brings us to the next important question – the default rate of customers on the platform. The duo claims that as far as defaults go, its NPA (non-performing asset) remains under 1%, as compared to the more than 2% to 3% rates seen by SME loan books in India.

But with so many competitors now playing in the SME lending space such as Lendingkart Tolexo, AskMeFin, Exclusife, Veritas Finance, among many others, how is Capital Float tackling competition?

As per Gaurav, Capital Float has three major differentiating features – product innovation and the suite of the products that it has for the SMEs which is very optimised for the clients, be it an ecommerce vendor or an Uber driver.

He adds, “If it’s a restaurant owner we have a loan against credit card swipes, so we have focussed on product innovation for different sectors. Secondly, we stand out in terms of the customer experience that we are able to deliver. We are known for delivering loans in a few minutes to kirana (local grocery) stores. The fastest loan that can be disbursed to these stores takes less than eight minutes. Third, we run a hybrid marketplace which means not only we have our own NBFC through which we lend but we also have our own marketplace through which banks and other institutions lend.”

Additionally, with recent offerings such as the Pay Later product which is more like a rolling loan facility, the startup aims to scale further with its lineup of more customised offerings for SMEs over the next year in more towns and cities. Currently, with its branchless model, in 100 towns and cities with 400 employees, over half its customers are in Tier 1 cities. However, the duo sees that that mix changing over the next year or so.

And, for that, Sashank believes that their team has been a major driving factor, which literally has been the tipping point in their growth story. He explains, “Honestly we brought together a senior management team in a very short time. Just after our Series A round, we made a concerted effort to put together a stellar cast of industry veterans with lots of experience. That team has allowed to scale us much more rapidly than we might have done otherwise.  For instance, our CFO is the former CFO of Bajaj Finance and our head of Decision Sciences has worked for Capital One in India and US. This team has put us on a much more accelerated path.”

With banks and NBFCS servicing about $150Bn of SME needs and unmet needs falling anywhere $200Bn -$500 Bn, SME lending has emerged as one of the deepest non-penetrated verticals in India. Added to that, as smartphone penetration increases, lenders could reach anyone over a smartphone to apply for a loan and get credit within minutes. Thus a significant opportunity to capture a large share of this unmet need lies ahead.

While the opportunity is huge, so is the competition. With almost all online lending platforms peddling paperless loans in a matter of few minutes, customer acquisition is no more a walk in the park. But with its customised offerings and a strategy of figuring out a niche target audience, Capital Float seems to have hit on the right note to rein in default rates while add more customers. How far will this strategy help it to scale against more established players, as mobile penetration brings more and more loan seekers online from inner cities will be interesting to watch out for in the coming days.