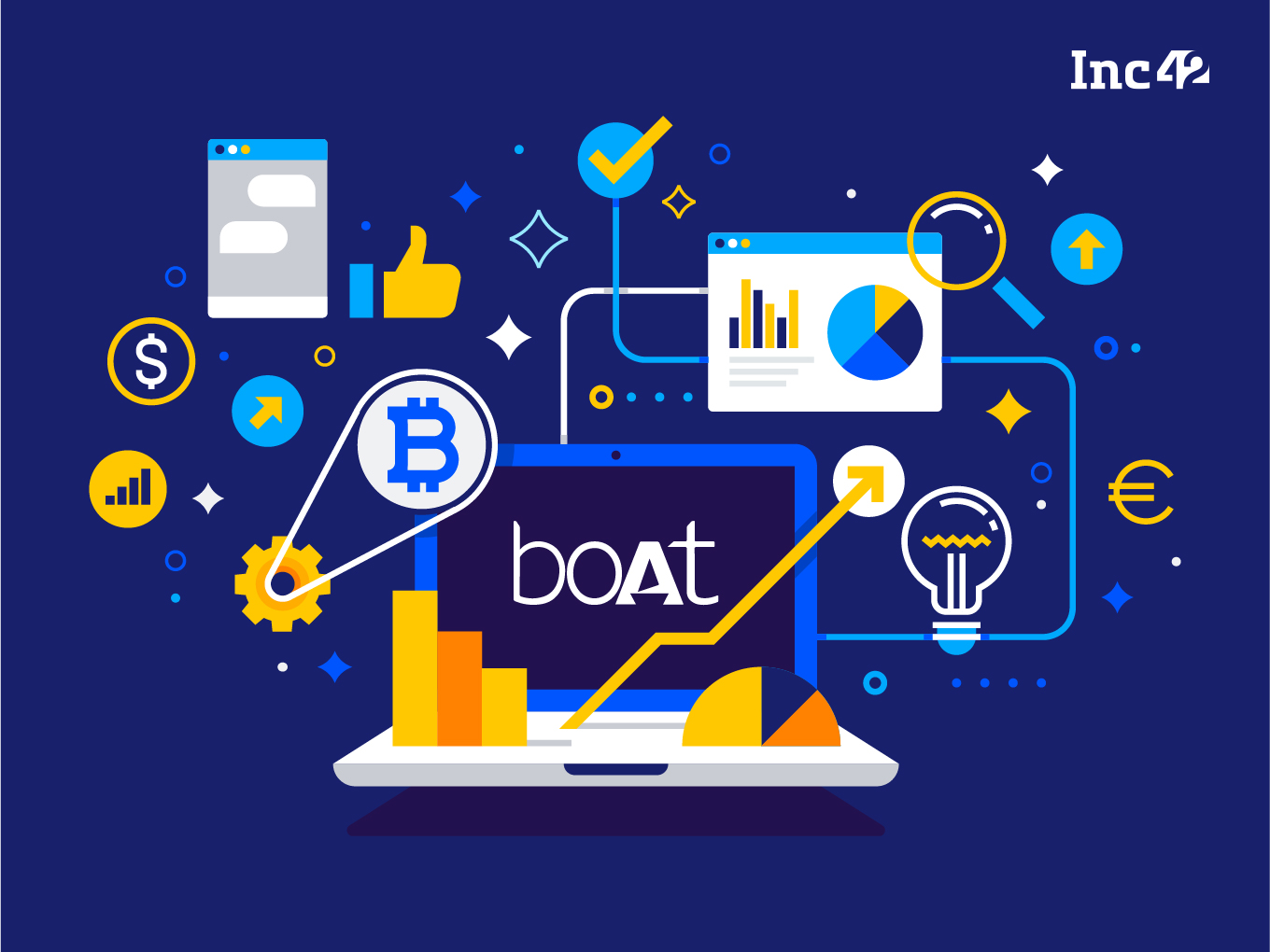 The consumer tech startup recorded INR 1,548 Cr worth of sales in the first half of FY22, 18% higher than the annual revenue of FY21

Audio product sales accounted for 93.5% of the total sales at the IPO-bound boAt in FY21

Third-party ecommerce marketplaces emerged as the top revenue channel for the company, accounting for more than 85% of the total sales in FY21

Consumer electronics startup, boAt, is all set to join the bandwagon of IPO-mania which has somewhat gripped the new age tech startups in the country. In January this year, boAt’s parent company, Imagine Marketing, filed its draft red herring prospectus (DRHP) to raise INR 2,000 Cr via an initial public offering.

Notably, cofounders – Sameer Mehta and Aman Gupta – collectively hold (28.26% each) more than 50% of the company. This makes boAt the second Indian startup, after Nykaa, where the promoters hold more than 50% stake.

Apart from them, Warburg Pincus is the largest shareholder with 36.48% stake. Other investors include Fireside Ventures (3.76% stake) and Qualcomm Ventures (2.6% stake).

The company clocked more than INR 1,548 Cr in sales in the first half of FY22, with most of it coming from third-party marketplaces.

Now, while the overall numbers are positive, the over-dependence on marketplaces like Amazon and Flipkart has created a sticky situation for the audiotech startup. Any disruption on that side could cost the startup 85% of its sales. Another cause of concern for the company appears to be its high working capital demand despite being a largely digital-first business. This has raised debt and could later prove fatal in the event of market correction.

Coupled with the ongoing volatility and a slew of disastrous market listings last year, boAt has to walk a tightrope for its listing to be successful.

The startup has raised more than $116 Mn across six funding rounds, backed by marquee investors such as Qualcomm Ventures, Warburg Pincus, InnoVen Capital and Fireside Ventures.

As boAt inches closer to its IPO, here is a snapshot of the company’s financial health in 5 charts to help potential investors:

The consumer tech startup clocked INR 1,314 Cr in total sales in FY21, a 143% year-on-year (YoY) increase in annual sales. Higher sales numbers can be attributed to a slew of reasons such as better customer acceptance of online brands in the wake of the COVID-19 pandemic.

With work from home (WFH) emerging as the most dominant trend in the past two years, the demand for good headphones for official meetings, virtual socialising and personalised entertainment has skyrocketed. The unprecedented demand, coupled with better aesthetics and democratisation of high-end features like noise-cancellation, accelerated consumer tech sales to a new level. Higher replacement rates and targeted advertising for the younger demographic also yielded better returns for boAt.

Along with sales, the company’s annual expenditure has also increased. The startup incurred INR 1,202 Cr in annual expenditure in FY21, clocking a 137% rise compared to the previous financial year. The global chip shortage since 2020 is considered partially responsible for this cost hike.

After all deductions, the consumer tech major reportedly earned a 10% operating profit margin despite rising costs.

The consumer tech firm put up a stellar performance when it came to sales. After recording INR 226 Cr in sales in 2019, boAt saw its numbers nearly triple to INR 609 Cr in 2020, even though the pandemic disrupted supply chains and impacted the demand curve.

The startup happens to be one of the biggest players in India’s crowded and competitive consumer electronics market. This unprecedented growth was mostly powered by boAt’s audio products, which accounted for 93.5% of its total sales. In FY21, sales of audio products stood at INR 1,229 Cr out of its total operating revenue of INR 1,314 Cr.

A close look at the IPO-bound boAt reveals an interesting trend. Many new entrants in the consumer electronics space often fare poorly online due to a slew of better and cheaper options. The competition escalates further due to deep discounting tactics and better marketing, but boAt seems to have overcome these challenges.

The company’s financials also reveal that third-party ecommerce marketplaces emerged as the top revenue-grossing channel, accounting for more than 85% of its sales in FY21. These ecommerce platforms brought in INR 1,128 Cr worth of sales, followed by offline sales worth INR 162 Cr. Sales via its website amounted to a meagre INR 24 Cr in FY21.

In essence, the breakdown seems to have stayed the same since FY19, with ecommerce channels accounting for 84-86% of boAt’s sales every year.