Blockchain This Week: West Bengal Districts To Use Blockchain For Issuing Birth Certificates, Chinese City Using It To Track Convicts On Parole, And More

Blockchain This Week: West Bengal Districts To Use Blockchain For Issuing Birth Certificates, Chinese City Using It To Track Convicts On Parole, And More

Twitter is exploring the use of blockchain to solve "the problems we're facing at Twitter", says chief Jack Dorsey 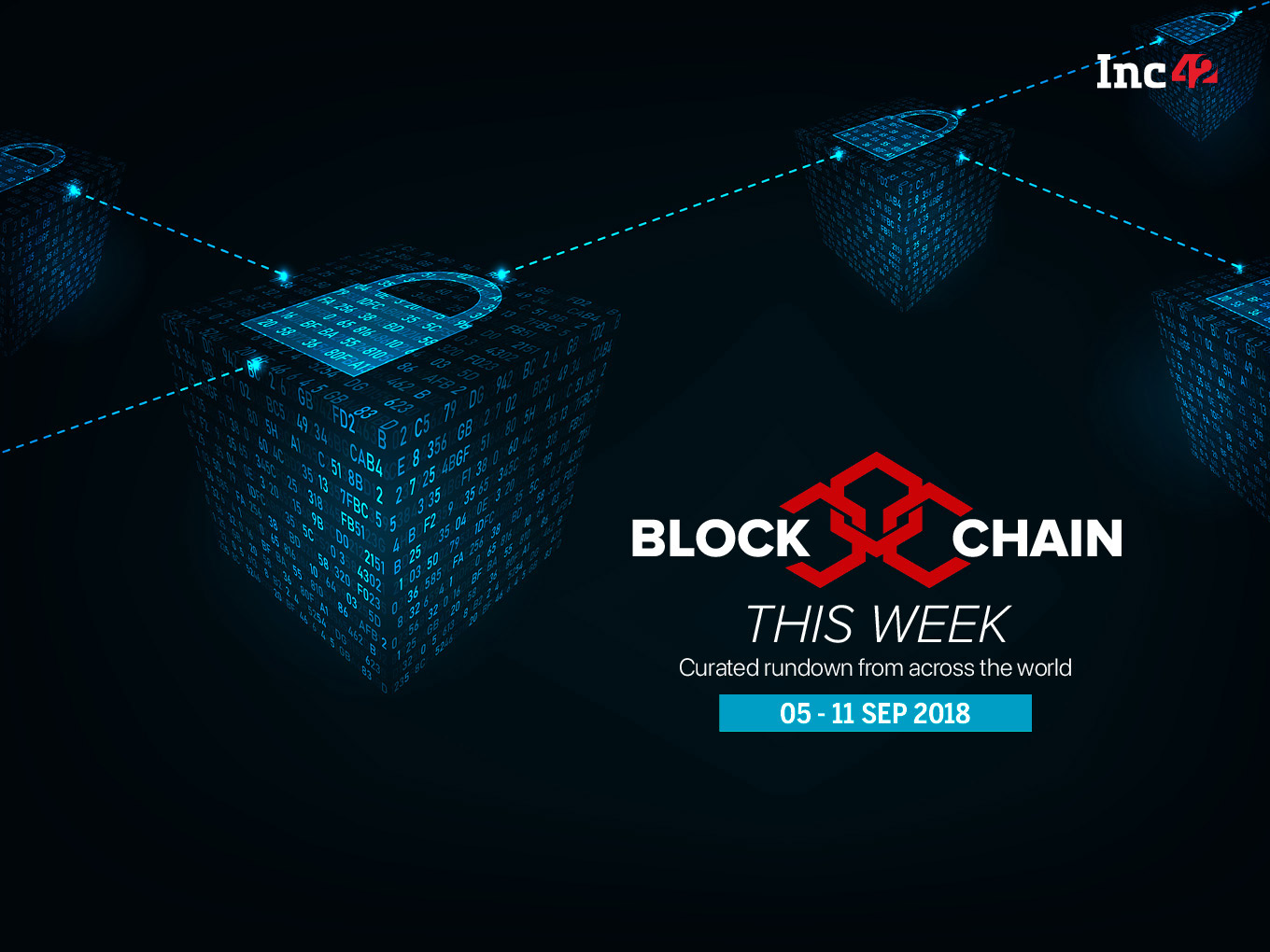 There is much ado in India these days over the recently released draft Personal Data Protection Bill, 2018, which aims to protect the personal data of Indians. Like many other things, blockchain may just be the answer to ensuring data security as well. However, it is not an easy task to adopt blockchain in India.

“If the personal data is stored on a blockchain network, there should not be any additional challenges as a permission-based blockchain network will ensure anonymity of the participant and can have a built-in consent mechanism,” wrote advocates Ashraya Rao and Shivam Arora, in an opinion piece for ET. Both Rao and Arora are Associates at Khaitan & Co, a leading law firm in India.

They also discussed the role of this distributed ledger technology in fair and reasonable processing and other related restrictions, localisation of personal data, privacy, transparency, and security safeguards.

Considering the rising incidents of data breaches in the country, capitalising on blockchain’s inherent security feature is something the Indian government and companies should look at actively. Just in the last two days, two cases of large-scale data breaches — the personal data leak of an undisclosed number of soldiers on the defence ministry’s pay websites and an alleged hack in the Aadhaar software that allows unauthorised persons to generate Aadhaar numbers at will — have been reported.

Meanwhile, the Supreme People’s Court of China has legalised blockchain to authenticate evidence in legal disputes. The court has released new rules with immediate effect clarifying various issues relating to how Internet courts in China should review legal disputes.

Part of the new regulation specifies that Internet courts in the country will recognise the legality of blockchain as a method for storing and authenticating digital evidence, provided that parties can prove the legitimacy of the technology being used in the process.

Last week, states like West Bengal, Chhattisgarh, and even capital New Delhi showed their interest in using the distributed ledger technology. Other states such as Telangana, Karnataka, Kerala, Maharashtra, and Andhra Pradesh are already pushing the blockchain agenda.

Here’s a curated rundown of important and related developments on Blockchain Ecosystem [September 5-11].

The municipal corporations of Bankura and Durgapur districts in West Bengal have partnered with the Netherlands-based company Lynked.World to build a blockchain-based platform for issuing legal documents such as birth certificates. Lynked.World is platform built on blockchain technology to verify digital identity, education, and professional experience.

Lynked.World founder Arun Kumar said the company expects to process 1 Mn birth certificates by the end of the year. The LYNK token will be the native token of the platform to enable citizens to file applications.

“These birth and other certificates will be digitally authenticated by issuing authorities (municipalities) and that authentication will be stored on blockchain which facilitates verification of these documents by any third party organization to whom owners provide access,” CCN cited Kumar as saying.

Delhi Municipality To Monitor Growth Of Saplings Via Blockchain, Geotagging

The New Delhi Municipal Council (NDMC) on September 6 planted 10,000 tree saplings — of neem, peepal, jamun, tamarind, etc. It plans to track the maintenance and growth of the plants with the help of blockchain technology and geotagging.

“People can enter the blockchain platform only by authenticating their credentials. They can also adopt a plant and take over the responsibility of its upkeep. Anyone entering the platform can monitor the progress of the plants on a real-time basis,” NDMC chairman Naresh Kumar said.

The Chhattisgarh Infotech Promotion Society (CHiPS), a nodal agency of the Chhattisgarh government — recently organised ‘Chhattisgarh: Blockchain for e-Governance Grand Challenge’, offering winners cash prizes worth $20,000 along with the opportunity to conduct a pilot project in departments such as data exchange, land records, health, and others.

“GovBlocks is built as an open, permissionless decision protocol for decentralised governance powered by a curation network. It enables easy management of decentralised applications by allowing them to configure an enhanced and dynamic governance layer, capable of managing a large, varied and constantly growing range of factors of decision making in a decentralised network,” the company’s website states.

Twitter CEO Jack Dorsey during a US congressional committee hearing said that the social media company is exploring blockchain solutions for its platform. The House Committee on Energy and Commerce was focussed on user privacy protections, misinformation, content moderation, and alleged bias against political conservatives on Twitter.

“We haven’t gone as deep as we’d like just yet in understanding how we might apply this technology (blockchain) to the problems we’re facing at Twitter, but we do have people within the company thinking about it today,” Dorsey said.

He was responding to a question from California representative Doris Matsui: “You previously expressed interest in the broad applications of blockchain technology, including potentially in an effort to verify identity to fight misinformation and scams. What potential applications do you see for blockchain?”

At a time when China’s charity activities have been mired in controversy after online scandals in recent years, a government agency in charge of social services is planning to adopt blockchain technology for an upgrade of its current charity tracking system, aimed at bringing transparency into public donations.

The development comes after the country’s civil affairs ministry recently released an action plan for 2018–2022, which outlined several areas in which it aims to use Internet technologies to improve the transparency of social service activities. It plans to upgrade the current charity tracking system by the end of 2018, with the completion of the project planned by 2020.

In its plan, the ministry notified that the blockchain network will integrate existing government charity databases at all levels to bring transparency in the online donation services operated by the private sector, to make charitable donations visible to the public faster using a distributed network.

The Chinese city of Zhongshan has developed a platform that tracks convicts on parole over a blockchain network. The effort is aimed at providing up-to-date data on every movement of convicts.

“The justice department of Zhongshan says it has launched a blockchain-based system that can monitor the movements of ex-prisoners to improve the quality of so-called ‘community correction’,” a local media company reported.

The technology has apparently been deployed across various community service centres where parolees are required to check in and complete their daily duties.

Hu-manity.co’s Blockchain App #My31 Tracks Where, How Your Data Is Being Used

Hu-manity.co, the company behind the 31st human right — making your data your property — which examines issues relating to data and its uses in the context of property ownership, has launched an Android app called #My31 built on the blockchain platform of US-based technology company IBM.

The app’s name alludes to the idea that legal ownership of one’s data should be a “31st human right” in addition to the 30 already ratified by the United Nations.

According to the app store, #My31 updates users where, how, and if their data is being used by any third parties and companies. It enables users to have a full control of how they want to use their data: just share it with one company, or maximise its potential, or decide to share nothing at all.

“Hu-manity.co has developed a proprietary technology that identifies existing legal corridors in privacy regulations and has designed new intelligent contracts on blockchains, which humans can use to negotiate new terms of consent and authorization with corporations so that inherent human data can be respected as legal property,” the organisation’s website states.

[Stay tuned for the next edition of Blockchain This Week.]