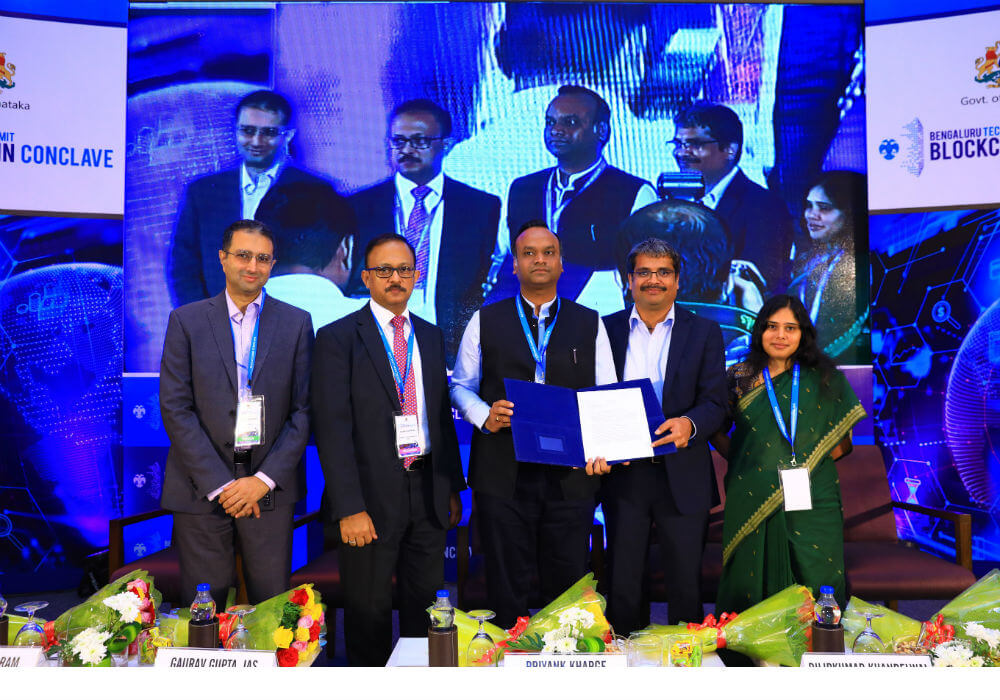 Priyank Kharge, the IT Minister of Karnataka has informed that the state machinery will be releasing a white paper by today evening regarding the Blockchain implementation in the government.

Based on the winning ideas from the Blockchain Hackathon, organised earlier this year, the white paper will set the roadmap for the blockchain implementation in e-governance, averred the IT Minister during an exclusive interaction with Inc42 at Blockchain Conclave, Bengaluru today.

“Initially, the blockchain project will be implemented on a pilot basis,” he added.

Earlier, in January 2018, the Karnataka government organised a blockchain hackathon to explore the possibilities of utilising the technology in the government processes. The Hackathon had judges and mentors from leading firms – Microsoft, IBM, Oracle, Wipro, and others, who came together over three days to develop some very interesting concepts.

At today’s Conclave, the winning ideas from the hackathon will also be presented.

Speaking to Inc42, Priyank Kharge further said that the event saw more than 500 people from 80 teams who participated in the blockchain hackathon. During the hackathon, 10 teams were chosen as the winners and the Minister has assured them of continued engagement with the government and utilising their concepts in governance.

“The feedback was phenomenal. The tasks implemented by startups during hackathon if found suitable will be implemented by the Karnataka Govt. Those blockchain applications will be further implemented to improve the overall governance bringing more transparency,” said Priyank Kharge.

He also suggested that the departments that are looking at the implementation of blockchain technology include revenue, education, horticulture, agriculture, forest and land acquisition amongst others.

Why The Sudden Push Towards Blockchain?

The Karnataka government has been following the Blockchain technology closely to explore its applications for the government more thoroughly. Aligned towards this vision, the state government had hosted the Hackathon.

States such as Maharashtra, Andhra Pradesh, Kerala have already started working on this technology or have announced plans.

Commenting on the development, Priyank Kharge further added, “The development has been significant enough to warrant special mention in our national Budget. While Bitcoin has created major headlines globally, Blockchain or DLT (distributed ledger technology), is the underlying technology powering all cryptocurrencies, and it has wide applications outside the crypto space.”

The Minister emphasised that the technology has the potential to revolutionise the way transactions are conducted and the way assets and accounts are managed worldwide. He said pointedly that Blockchain is one of the most disruptive of the emerging technologies.

“It is estimated that its impact will be what the internet was to the 1990s and 2000s. Netscribes Inc. estimated that the global blockchain technology market size will reach $13.98 Bn by 2022, with a compound annual growth rate of 42.8%. The Asia Pacific is the fastest growing market for Blockchain and by the end of 2017 held close to 28.39% of the global Blockchain market ($116.82 Mn),” Priyank Kharge said.

As per the national policy stance of the government of India, while cryptocurrencies are not seen as legal tender, there is great enthusiasm for non-currency applications of Blockchain.

This is evident from Priyank’s statement, “We in the Government of Karnataka Department of IT are eager to embrace Blockchain technology.  We wish to make more stakeholder-friendly, secure and citizen-centric ecosystem to render government services more efficiently by using blockchain as a tool.”

As a result of the engagement with various departments in the government and Blockchain community during the Hackathon, Priyank claimed that the government has prepared a ‘Roadmap for Blockchain for Governance’.

He remarked, “We hope to benefit from your feedback.This will be a learning and evolving process for all of us where we will learn from a variety of stakeholders. I welcome all our distinguished speakers and guests who have joined us today from different parts of the country and the world, and hope you have a most productive session.”

Gaurav Gupta, Principal Secretary, ITBT Department, Government of Karnataka, said, “The government has a lot of assets on which transactions are done and they play a critical role in taking subsequent decisions if any.  Maintaining a trail of these transactions and the current state are the two keys things in any scenario.”

He further said that since the stakeholders are from varied sections and departments, coordination and getting inputs from everybody becomes difficult. “It is highly desirable to have an ecosystem which is self-driven and trustable in nature and blockchain offers a platform to find solutions for these inherent issues in Governance,” said Gaurav.

Like cloud computation which has been in existence since 2004 that could only evolve and be implemented on a larger scale only after 2010 as the other necessary awareness and hardware developed along, blockchain which has been there since 2008 is now witnessing an exponential rise in terms of implementation as the awareness and the crypto-ecosystem brings the right environment.

As Priyank Kharge puts it, “Blockchain has become the most discussed and intriguing technology today,” the state departments, startups and other stakeholder need to make it sure that the technology is bankable too.

[The article has been written by Diana Chingakham and Suprita Anupam]