Blockchain This Week: Blockchain And Data Privacy In The Times Of Coronavirus & More

Blockchain This Week: Blockchain And Data Privacy In The Times Of Coronavirus & More 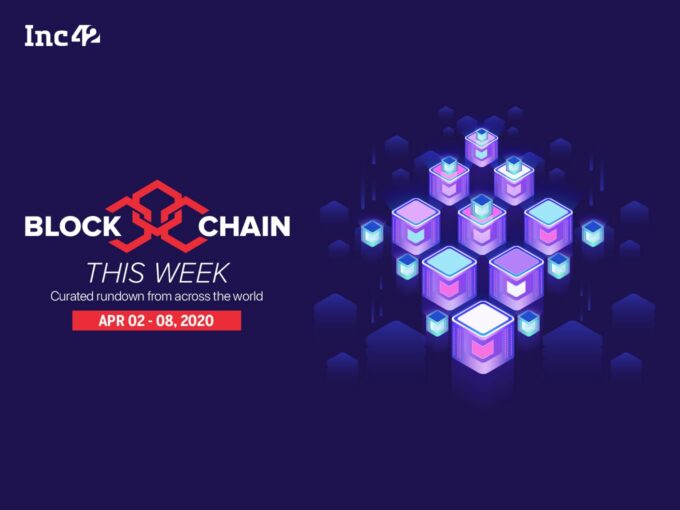 Data privacy is on everyone’s mind right now as government authorities look for multiple ways to contain the spread of Covid-19, including using GPS and Bluetooth-based tracking. However, the question of patients’ data privacy remains unanswered when using such applications.

Recently, the government’s think tank Niti Aayog launched a location-tracking app called Aarogya Setu, which has been developed through a public-private partnership (PPP) under the guidance of national informatics centre. The self-assessment app uses Bluetooth technology, algorithms and artificial intelligence where it helps people avoid the risk of coming into contact with infected patients and alert them to stay indoors.

Aarogya Setu claims to follow a privacy-first approach, where the personal data collected by the app is encrypted using state-of-the-art technology and stays secure on the phone until it is needed for facilitating medical intervention.

Today, governments across the world are deploying such phone tracking, location-based monitoring applications, which lets the authorities plan selective quarantining and restrict the gathering of large groups of people. This, in a way, addresses the problem but does not have a cohesive end-to-end patient management solution with privacy at the core.

Therefore, the use of privacy-proof blockchain solution, combined with existing technologies can address privacy issues and preserve the data privacy needs of Covid-19 patients.

According to a Gartner report, blockchain technology is expected to create more than $176 Bn worth of business value by 2025 and $3.1 Tn by 2030. The below-shown graph depicts the rise of blockchain enterprise solutions, followed by digital currency, intracompany applications and public record systems. 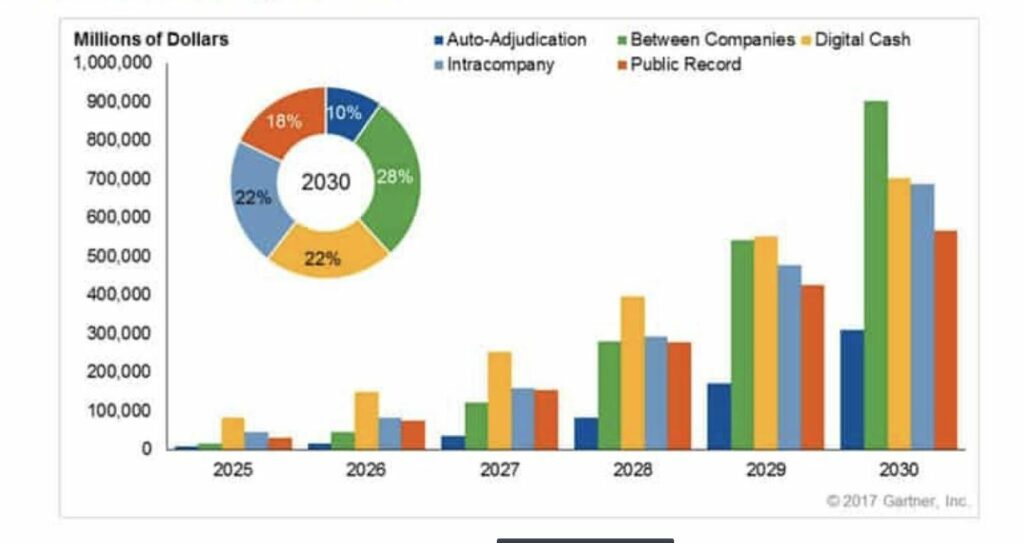 Latin America To Use Blockchain Technology To Tackle Pandemic

In an effort to fight the coronavirus pandemic, a Canada-based blockchain startup Emerge has launched a public safety system app called Civitas in Latin America to assist local authorities. In its blog post, the company said that the application was designed to improve safety and cut store wait time by reducing gatherings in tight spaces and reducing the probability of contagion.

Further, the platform is integrated with local government ID numbers along with unique blockchain records, thereby allowing authorities to determine if the citizens qualify for permits to leave their homes. For instance, if a user reports any signs of coronavirus-like symptoms, the app helps them determine which days are safest for them to go out for buying essentials, precautionary measures etc.

TikTok’s parent company Bytedance recently integrated blockchain technology from Ant Financial to enforce copyright protections on stock photo platform Tuchong.com. With this service, the copyright of creative works from photographers can be recorded on the blockchain, making it immutable, transparent and reliable. The copyright blockchain has so far provided protection services for about 800K photographers and over 2.9 Mn photos on the website.

Tuchong.com in a press statement said that with the use of blockchain technology, photographers on its platform will not have an easier way to protect their rights and are better able to prevent their works from being pirated. On average, more than 200K new original photos are being identified daily with their copyright on the blockchain. Till date, Tuchong.com has accumulated about 460 Mn photos, with 8 Mn contributing photographers.

In a recent blog post, the WEF head of digital trade Ziyang Fan and Rebecca Liao, executive vice president of blockchain enterprise firm SKUChain said that the pandemic has led to disruption in the supply chain and called for more visibility across the chain. Further, the report stated that the use of blockchain will give broader access to relevant parties and also allow them to purchase supply chain data from their suppliers.

The report said that digital-first companies are dealing with supply chain disruptions much better than those who have not adopted technology, WEF added.

As China reopens its markets and factories, blockchain-based logistics provider CargoSmart revealed that electric vehicle giant Tesla has completed a blockchain pilot test with the Shanghai International Port Group (SIPG) and Chinese cargo ship operator COSCO. The goal is to accelerate the supply chain for EVs and track components in a trustable and secure manner. At present, Tesla has factories in China, where it builds batteries and assembles cars.

US auto major General Motors recently announced a new patent which uses blockchain technology to make autonomous vehicles safe and reliable. The system has integrated vehicle sensors to build a much more advanced version of the navigation map for autonomous vehicles. This move from the company is expected to roll out automated driving cars in the US, faster.