Bitcoin prices have surged back after debate over the cryptocurrency’s future appears to be heading to a positive resolution. As per reports, the two camps – one of which was favouring a solution called Bitcoin Improvement Proposal (BIP) 148 and the other one favouring BIP91 for scaling it – are showing majority support for the BIP91 solution. Both the solutions are for increasing transaction capacity but, for now, 93.8% of miners are showing support for the BIP91 proposal in the last 24 hours.

The effect of the resolution resulted in a sharp rise in Bitcoin prices, which had sunk down to $2,200 this week. The price shot up to $2,950 on most of the international exchanges and is now trading at $2,800 levels. 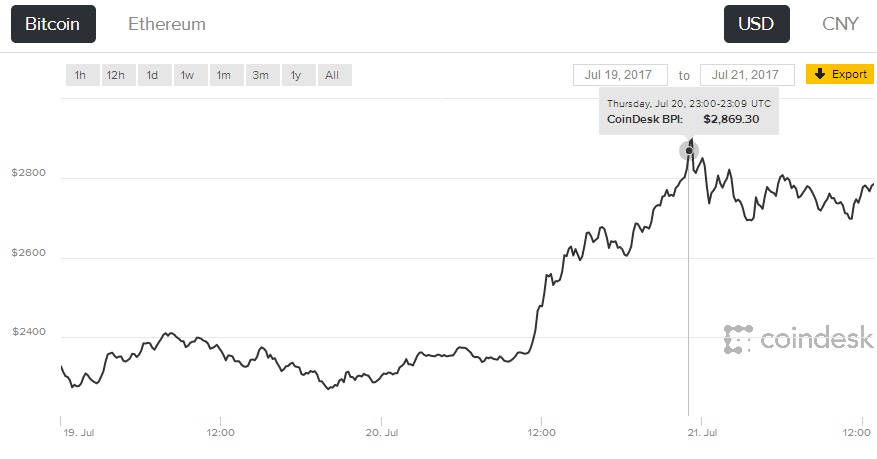 One faction of Bitcoin miners was supporting a solution called BIP 148, which would induce a “fork” in the Blockchain. This would mean that two separate Blockchains and two separate Bitcoin tokens would be created.

Another group meanwhile rooted for the proposition called BIP 91, which would introduce something known as SegWit2X to the Blockchain. SegWit which stands for “segregated witness,” would move some of the data outside the main Bitcoin network to increase its capacity.

But, as of now, the miners have accepted the BIP 91 proposal which would increase the block size. The new code update called BIP 91 has been locked in with 93.8% of miners showing support for it. Since it is essentially a software update that miners need to run, this means that 93.8% of miners are signaling their intention to run it. The miners will now have a two-day grace period for miners to prepare for the activation of BIP 91. Following that, there will be an adjustment period which could take two weeks. But the actual increase of the block size might not take place until November 2017.

Though right now miners are showing support but potential issues could still arise if miners do not upgrade their software, even though they are signalling that they will. For the time being however, the decreasing likelihood that the cryptocurrency could split into two competing assets and the fact that the SegWit would bring increase in capacity is leading Bitcoin prices to rise.

Commenting on SegWit activation, Mahin Gupta, co-founder and CTO, Zebpay stated, “SegWit is locked in today with more than 93% miners showing support and most probably will get activated in next few days. This is an important milestone and will allow Bitcoin to grow at a more rapid pace now. This should also end uncertainty over UASF (User Activated Soft Fork) and chain split and the worries of millions of users about storing their coins.”

Even though the tensions in the cryptocurrency scaling debate could re-emerge later this year, for now the resolution has apparently quietened the conflict and speculations about an expected coin split on August 1, 2017. The conflict had resulted in a fall in Bitcoin and cryptocurrency prices in the last couple of weeks.

(The development was reported by CNBC)