From Selling Candy At Age 12 To Founding Idealab: Bill Gross’s Entrepreneurial Journey And What We Can Learn From It

From Selling Candy At Age 12 To Founding Idealab: Bill Gross’s Entrepreneurial Journey And What We Can Learn From It William T. “Bill” Gross, an American businessman and the founder of business incubator Idealab, did not make this statement off-hand. It was the result of an incredibly deep effort and analysis of the success and failure factors of over 200 companies including global unicorns such as Airbnb, Instagram, Uber, YouTube, LinkedIn, Kozmo, flooz, friendster and more.

Everyone understands that there is no ‘fixed’ formula for success. But then why have some startups scaled to the growth graph quickly, while others fail way before? Why a great idea fails to get audience today, but gets converted to a billion dollar valuation company years later? What comes first – an idea or a  business model?

Bill’s analysis provides answers to all these. But before we take a deep plunge into his analysis, let’s have a brief overview of his entrepreneurial journey.

From A Candy Seller To Founding Idealab

Gross grew up in Encino, California and graduated with a Bachelor of Science in Mechanical Engineering from the California Institute of Technology. Those who know him better defined him as a small, thin man with great enthusiasm and ideas bursting out from his head so profusely, making people lean towards his charisma in no time.

At the age of 12, while in junior high school, he started his first business. He used to buy candies at a cheap price from the storer and sell them near bus stop. In three years, not only did he make a profit of $400, but also earned great experience on skills such as identifying the target market (where to sell), buyer behaviour (what candies they like), product sourcing (the availability of cheap candies) and more. 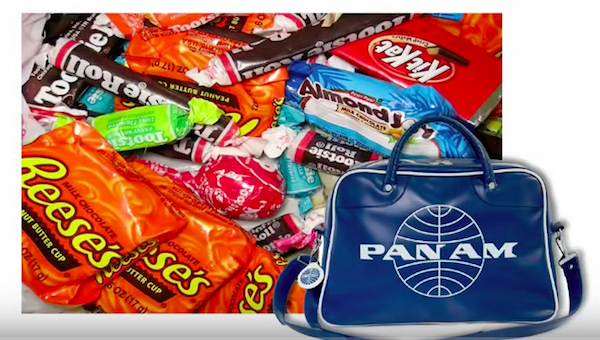 In 1973, during high school, he started selling handmade items in the campus. This was the time when California faced a severe energy crisis. One could only buy $5 gasoline per day, on odd and even number of days, based on last digit of your license plate. Gross found the opportunity to start his second business in this ‘need of the hour’ and came out with a solution.

As he chuckled, “I was just 15 years old and I thought that I can use my maths skills from just making parabolas to try and make solar energy concentrator things.”

He made some for 40 cents, initially duplicating plans and tools kits shown in a popular science magazine and sold them for $4. “That was my first taste. That was a very powerful taste of electoral property. From selling candy bars at two-thirds of the mark-up, I was selling ideas from my head for 90 percent markup. This was very very intoxicating. And I sold about 10,000 plans over the next three years of high school at $4 and that helped me pay my way through college.”

This also later laid the foundation for a Gross company, working on the development of a rooftop concentrated photovoltaic solar collector for flat-roofed commercial buildings. They completed the world’s largest corporate solar installation at Google’s headquarters in 2006.

During 2010, Gross was the CEO of eSolar, a company that aims to make renewable energy cost-competitive with fossil fuel energy using CSP technology. eSolar builds an individual 46 MW power unit on 200 acres and can scale up to 500 MW or larger capacity with multiple units. The company has an order for a 100MW plant in India (in production) and a 500 MW plant in China (forthcoming.)

As he believes, his early entrepreneurial stunts helped him to get into the California Institute of technology where he enrolled for mechanical engineering. And fate welcomed him there too, giving him opportunity for his third business, the loudspeaker design. “When I went to college the seniors there had these incredible audio systems that I couldn’t afford. But someone said that you can go to the audio engineering classes and learn how to make those.”

From a candy seller to the owner of companies like audio equipment manufacturer GNP Audio Video (acquired by Lotus Software); educational software company Knowledge Adventure (acquired by Cendant), Bill Gross has been crowned with adjectives – uniquely creative and the smartest Internet thinker.

What Matters Most To Make The Startup Successful

In his speech, Bill quoted Peter Thiel’s book “Zero To One.” The book emphasised on how much value is created when you take a new idea that is fresh, and then put it in place as compared to going after a scaling idea that already works.

“I do agree with him. I think a huge amount of value creation goes when you see something that no one has tried before. And then make it a fact. And there is no simple formula for this.”

Even though there is no fixed process of charting out the route to entrepreneurial success, there definitely are a few basic factors which every entrepreneur should keep in mind. In order to identify these key success elements, Gross analysed the success and failure factors of 200 companies and realised that there are five key elements which can form the path of success for any startup. 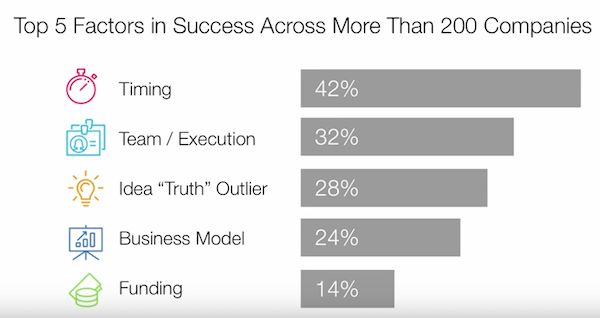 Surprisingly, it was not ‘Idea’, or ‘Funding,’ but ‘Timing’ that came out as the most crucial factor.

Funding: According to him, funding matters the least because when you have a good idea – as long as you have enough money to get it out there in the market, find the best product market fit, you will be able to find ways to get more money. You will find the way to last with focus on adaptability and proper execution.

Business model: If you have traction, than you can adapt your business model. Take Facebook. People laughed at the idea first. But now it’s making billions of dollars, has trillions of page views and is a direct competitor to Google itself. When it started off, it was just a single page for college students to talk to each other with no business model, per se. A business model can be added afterwards, once you have figured out the product/service.

Idea: If you can come up with an idea that resonates with the customers, it’s good.  If you don’t, then the fact is you won’t succeed. At first, ideas may be considered outrageous owing to their novelty. But the transition from being outrageous to making an impact is the sign of a innovative and strong idea. Although a good idea matters a lot, it’s still not the single most important thing. The idea alone will not lead you anywhere. Sometimes ideas have been tried before, but what matters most is how it was executed and more importantly, the timing.

Team/ Execution: As Mike Tyson says, “Everybody has a plan until you get punched in the face.” Starting up a business is the same. You might have a perfect business plan but honestly, the first interaction with your customer is the punch in your face as it changes everything, even the entire business plan. “You have your idea, and they have their ideas.That’s why I think team execution, and adaptability matters so much. Because when you first got punched, you coiled from that punch, you respond to it, listen to it, pay attention to it and then adapt your business accordingly.”

Timing: So many ideas need to be executed at the right time. Even though you get everything right, if the timing is not right, the startup tends fail. Here are two well-known stories to explain this.

Before Airbnb, many companies have launched platforms where you can rent other people’s homes. However, either they launched the concept too early or they were unable to find the right product-market fit for it.  For Airbnb, the idea was born out of immediate need, and was executed very cleverly. (Check out the Airbnb story here)

“The timing was incredible. Because it was just there as recession was hitting travellers the world over. So, timing was a big factor in that company’s success.” 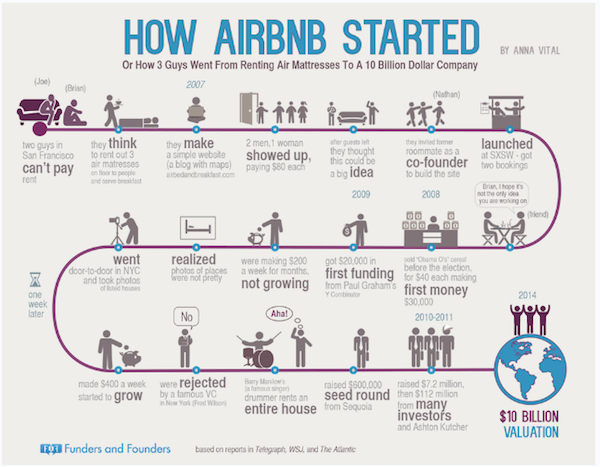 YouTube was launched in 2005. But way before that in 1999, Gross started a company called Z.com. The thought behind starting up was – with everything moving to the Internet, eventually entertainment will also move online. The business kickstarted with exclusive content contracts, over $10 Mn funding, and a team of 100 people. However, as Gross said, “In 2000, the broadband penetration was mere 10% and to watch a video online one needed to download codex and plug in many weird things. So, we had this great stuff that nobody could watch.”

Eventually, they started losing money and in 2002, downsized to a team to 45 people. In 2003, the team got reduced to 11 people and at the end of 2003, they were out of business. Explaining the reasons for the failure, Gross elaborated,

“In 2004, Dorby came out with its flash player and the flipcam came out, and everybody started making a whole bunch of videos with USB stick. And then two guys come and say, hey, we should make a website where people can share videos. By now, broadband penetration had reached 40% and YouTube was born. I don’t say that the YouTube guys have not executed the idea brilliantly, they even raised millions of funds, but the timing was great. We really blew that company, by not sticking around until the timing was right. We could have looked more smartly, what the other signals were telling us. People liked what we were making, but they couldn’t watch it. Sometimes, you cannot control all the external variables. You have to be very honest with yourself. About what the rest of the world is telling you on the timing front.

If you make something that can resonate with the minds of the customer, then you can have that big impact. Earlier, it used to take 20 years for a traditional Fortune 500 Company to reach $1 Bn valuation. But impending tech, specifically mobile revolution in emerging economies, has reduced the time gap to one-and-a-half years.

There are a few tips to help an entrepreneur resonate with the minds of the customers.

Look For Ideas Everywhere: One must pursue their passion and work at something they love. Every business will face huge challenges that one can only overcome if they have deep passion for the idea.

Test, Test, Test: Find a way to test your core proposition with your customer and manage your resources to adopt that learning.

Acquire Complementary Skills: Find people who balance your strengths, and bridge your weaknesses. Teams of diverse personalities can achieve great success. There are four extreme personality types that can be considered: Entrepreneur, Producer, Administrator, and Integrator – EPAI

For instance, if there’s a scratch on the window, Producer will say, here’s a scratch, we need to fix it. Administrator will say- there’s a scratch, we should make a form, anybody anywhere sees anything wrong, will fill up the form, we will take it in order, go through the exact order and take care of them. Entrepreneur will say – see those buildings across that crack. I find an opportunity there, let’s start with a new business. And an integrator will point at how the people near that window are feeling. Getting all of these resources in a company in balance is very important.

Stick With It: You may be ridiculed for having an idea ahead of its time. Just remember, all truth passes through three stages.

First it is ridiculed, second it is violently opposed, and lastly, it is accepted as being self-evident.