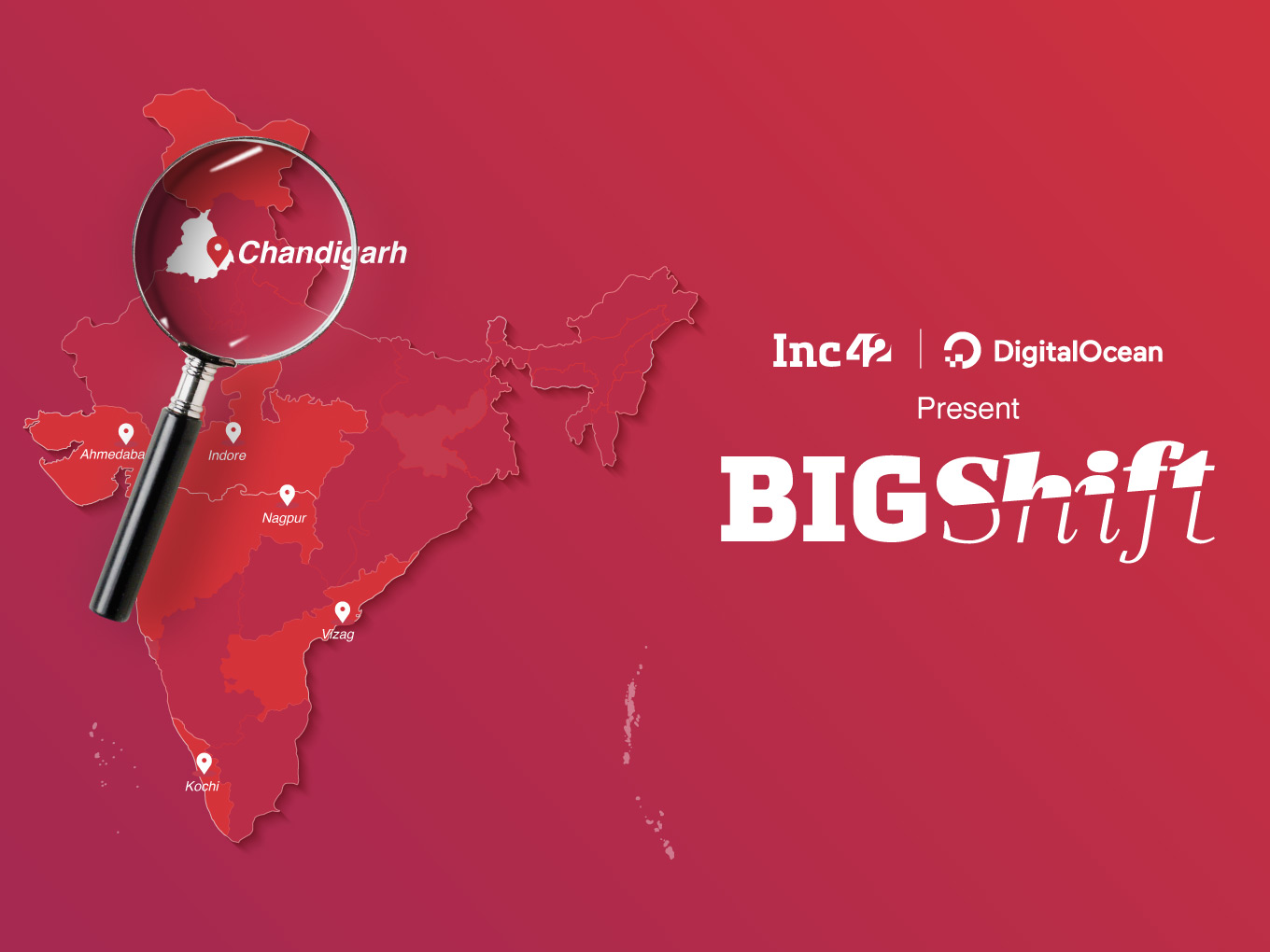 The event will bring together eminent speakers including Ankit Mehrotra, CEO, Dineout and Vineet Khurana of Chandigarh Angel Network

Highlights include BIGShift Pitch, where five startups from Chandigarh will get a chance to make a pitch in front of a jury

The Indian startup ecosystem is progressing fast, and while cities like Bengaluru, Delhi and Mumbai are the leading names in the startup hubs, the cities in states such as Punjab are slowly catching up to the metros. According to DataLabs by Inc42, Punjab has 1,000+ active startups and about 140 startups are registered with the Department of Promotion of Industry and Internal Trade (DPIIT) and the number is increasing every day. The capital of the state, Chandigarh, has particularly seen a lot of attention from many entrepreneurs and has given birth to many innovative startups that are creating history. The city was even ranked among the ‘startup beginners’ in Startup Ranking 2018 by DPIIT.

In recent times, the state government has proactively started showing interest in the city’s startup ecosystem who along with private players are working towards making the state an important startup destination. It is in Chandigarh that India’s first private accelerator, The Morpheus, was launched in 2008. This was a major milestone in Chandigarh’s startup ecosystem. The accelerator opened its doors to budding entrepreneurs, such as Yourbus and Online Prasad. After six successful years, the accelerator shut down in 2014, but it played a role in accelerating more than 80 companies across 10 batches during its stay.

Today, the city is home to dozens of investors including the networks like — Chandigarh Angels Network, a community of successful entrepreneurs turned angel investors in India, committed to supporting promising startups and help them scale in the market. With over 45 investors and more than 16 startups in its portfolio, the focus is on startups at the seed and growth stage to help them ride the wave of the startup ecosystem in India.

To further push this ecosystem further, Inc42 and DigitalOcean are heading to Chandigarh as their first city for the second edition of BIGShift on July 19 at Space Jam. The idea is to shine the spotlight on the city’s startup ecosystem!

Chandigarh: A History Of Innovative Startups

The city already houses the headquarters of several tech giants including the likes of Infosys, Dell and TechMahindra and IT-based companies such as Trigma, Viprasoft, iNVERTEDi and uTrade Solutions. So naturally, startups have emerged as a result of the influence of these companies.

Chandigarh’s developing ecosystem is evident from startups such as the on-demand auto rickshaw platform Jugnoo which is backed by Paytm and has expanded across India very quickly. The company is now targetting the global market.

Other startups of the same success calibre include PumpKart, the online marketplace for water pumps launched in 2013. This startup’s success story was mentioned by Google CEO Sundar Pichai in his speech at ‘Digital India’ in front of PM Narendra Modi. Another example is Click Labs, which was launched in 2011, and released its third SaaS product­ Tookan, which streamlines delivery operations for SMEs and early-stage startups that have to manage their mobile workforce.

Over the years, the city has become the preferred destination of many budding startups as well, such as Busibud, Just Herbs, ZappFresh and more. The young entrepreneurs from Punjab and Haryana’s capital are working hard to carve their names on India’s startup landscape. The need of the hour is a platform where budding entrepreneurs can meet the stalwarts of the startup ecosystem to grow and scale their business and this is exactly what BIGShift is providing.

Chandigarh has quickly formed a vibrant network of people and resources to support the varied needs of startups that are based in the superbly-planned city with great infrastructure support. The city has not only drawn the attention entrepreneurs looking to kickstart their businesses but it has also been of interest to accelerators, incubators, and coworking spaces.

Joining the accelerator force in Chandigarh, Startup Accelerator Chamber of Commerce (SACC) also launched a startup incubator and accelerator in 2015. Other accelerators in the city are CU-CEED (Chitkara University Centre for Entrepreneurship Education & Development), Indian School of Business (ISB) and TBI (Technology Business Incubator) etc. Providing the startups with the infrastructure and other necessary resources that they need. These accelerators and incubators have boosted the local startup ecosystem of Chandigarh to great extent.

Student-run and professional organisations such as TiE Chandigarh, and Entrepreneurship Development Cell are making the journey of startups easier by bringing the budding entrepreneurs closer to the market and the corporate world. This makes it much easier for startups to know what to expect from their journey and empowers them with the knowledge to tackle the existing challenges and issues.

Adding to this network effect are coworking spaces such as Innov8 Chandigarh and Start-Hub Nation that are redefining the models that startups are operating on, making everything convenient and affordable. The annual TiECON and Entrepreneurial Summits like Udyami (by Punjab University) complement events such as BIGShift and are a great way of connecting local talent to entrepreneurs and offer a great platform for startups to share their ideas, get advice on growth and scaling, and bring their product to market armed with the right information.

This multi-pronged approach has helped make Chandigarh one of the most attractive emerging startup destinations in India, and resulted in it seeing a lot of traction from many promising entrepreneurs and startups. To bolster this growth and provide an opportunity for the local startups to connect with the key stakeholders such as corporates and investors, Inc42 and DigitalOcean are bringing BIGShift to Chandigarh. This is the platform for startups to network with the local ecosystem and build connections that can have a positive impact on their business at every stage.

BIGShift Chandigarh: The Mission And The Agenda

BIGShift, an Inc42 and DigitalOcean initiative will act as a bridge familiarising the startup ecosystem with their counterparts in Tier 2 cities, while empowering the entrepreneurs and businesses in Tier 2 cities by giving them a platform to showcase their products, propositions and services, besides allowing them to spread their business network by connecting them with the ecosystem stakeholders.

On its last trip to the city, BIGShift offered a platform for the Chandigarh’s most innovative startups and the event was headlined by a storytelling session by Samar Singla, Jugnoo and Click Labs CEO and founder. Startups such as Heuristech Labs, Pind Fresh and others got an opportunity to showcase their products and discuss their business ideas with fellow hustlers from the ecosystem.

BIGShift Chandigarh is bigger and better in 2019,  along with sessions like a tech workshop from Saurabh Gupta of DigitalOcean, sessions by Ankit Mehrotra, CEO, Dineout; Vineet Khurana of Chandigarh Angel Network; Sumeer Walia, the Director of CEED and Karan MV of DigitalOcean. The biggest highlight of the evening is the BIGShift Pitch, where five startups from Chandigarh will get a chance to make a pitch in front of the jury.

If you are one of the startups aiming to entice the world with your innovation and creativity, this is a great opportunity for you at BIGShift Pitch.

BIGShift Pitch is a platform for startups to showcase their business proposition as well as products or services in front of the stalwarts from the startup community from each location. Any early-stage startup based in any of the BIGShift host cities can apply to showcase their business proposition at the event. Inc42 will be shortlisting applications based on the following parameters.

Why Should You Apply For BIGShift Pitch?

The BIGShift event series has seen participation from over 400 startup ecosystem stakeholders in its first edition, and has enabled 40 Indian startups to showcase their products and present their ideas to investors, other entrepreneurs, influencers and more.

This year the expectations are high as BIGShift travels the length and breadth of the country to bring the best and most innovative startups to the spotlight. This time around, we will be heading to six emerging startup hubs in Tier 2 cities to engage, empower and enable the local startup ecosystem including — Chandigarh, Nagpur, Indore, Ahmedabad, Vizag and Kochi!

We are reaching Chandigarh on 19th July. Come  join us and be part of BIGShift!

The BIGShift editions for Chandigarh is being supported by Dineout as Associate Partner and, TiE Chandigarh, Chandigarh Angels Network, Startup Punjab and eChai Ventures as ecosystem partners.