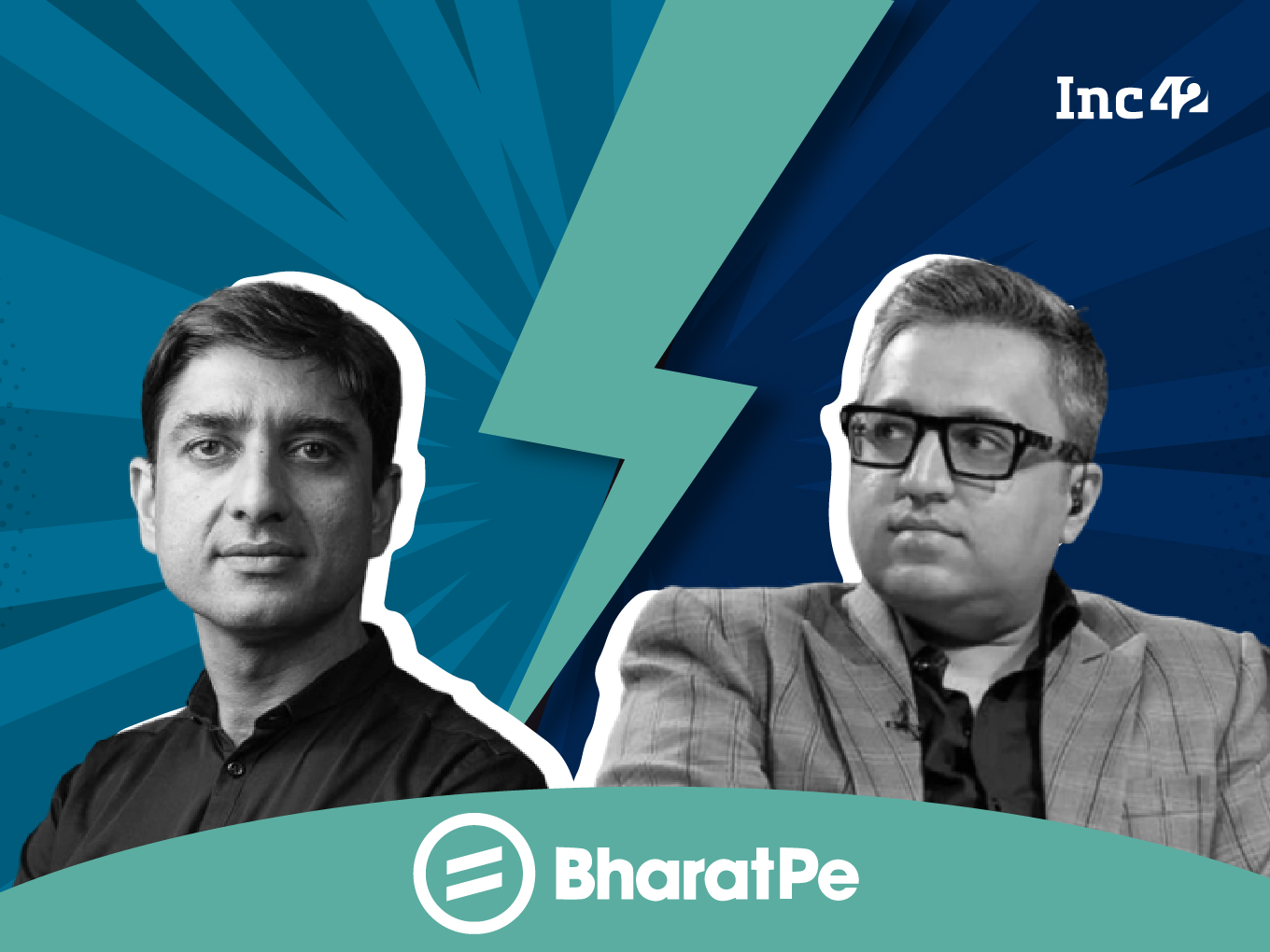 A tirade of LinkedIn comments ensued between Aashima Grover, Ashneer’s sister, and Suhail Sameer, BharatPe’s CEO after the former alleged the unicorn of ignoring administrative staff

The BharatPe boardroom spat has been ongoing since January 2022, shortly after the unicorn discovered financial irregularities

People are taking sides on the internet, and wars begin on Twitter at the drop of a hat. However, before yesterday, apart from the much-maligned Ashneer Grover, no one else was stoking the dumpster fire, with an occasional prod from Suhail Sameer just to keep the fire going.

Yesterday, though, in the comments section of a BharatPe employee’s LinkedIn post, a full-scale battle unfolded, and while Ashneer stayed out of it, his sister decided that it would be best to fan the flames even further. And Sameer thought it would be a good idea to respond in kind.

This resulted in a firestorm, and while BharatPe’s team has been working hard to put out fires their (very immature) leaders are lighting up whenever given the opportunity, this is impossible to spin into anything logical.

A BharatPe employee, Karan Sarki, had shared a LinkedIn post late on Wednesday, talking about how employees had not received salaries and their reimbursements had been due since December.

While LinkedIn has seen itself turn into the next Facebook for professionals to share what they like, this appeared to be a legitimate post by a worried employee who probably was under pressure because of his unpaid dues. The person tagged the leadership, current and ex, to bring his cause to their attention. However, he could not have imagined the attention that he was going to receive.

Ashneer was the first responder to the fire that was about to start, coming to the aid of Karan and imploring the leadership, tagging Sameer and the BharatPe CA for the same.

However, the comment section soon became a warzone, and Aashima Grover fired the first shot, replying to Ashneer’s only comment on the post. In hindsight, Ashneer made a good call by not replying to any comments and not commenting on the post again.

Surprisingly, the comment was very supportive of Ashneer Grover and his ilk, with multiple comments of support throughout the more than 250 comments that the post saw.

However, Aashima did not stop with just that. She was constantly replying to comments on the post, calling out the BharatPe leadership every single time, claiming that the team was out in Goa enjoying while the employees suffered.

And her proactivity was shown in shutting down any and all opposition as well, going as far as to say that the media reports which point to the financial irregularities are fake and that the media is paid by BharatPe to do the same. When Anushka here called Ashneer and her wife out on embezzlement, Aashima was quick to respond. 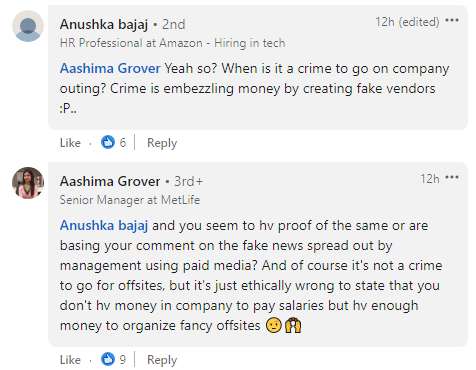 For a refresher, Inc42 has reported the entire BharatPe saga, from Ashneer’s leave till April 1st, which has come and gone, to the infamous audio recording (which some in the comments called fake) to his eventual stepping down from BharatPe after financial irregularities cropped up that saw his wife and ex-BharatPe head of control Madhuri Jain Grover being relieved of her duties.

While a comprehensive recap of that is not really required, the latest chapter of the BharatPe saga has unfolded in front of the whole world, again, and it reads like two teenagers arguing in an average Facebook comments section.

People did not shy away from referencing Ashneer’s stint at SharkTank as well, alleging that a reason for his eventual, depending on who you ask, resignation or dismissal. 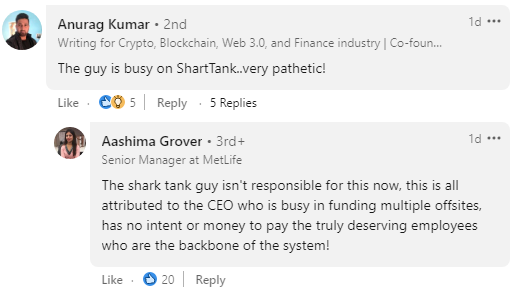 At any rate, anyone who was implying that Ashneer and his wife were in the wrong was quickly shut down by either the supporters of Aashima herself, calling the CEOs ‘destructive’ and ‘heartless’, categorically denying everything.

However, things came to a quick head after Suhail had the questionable judgement of joining the party and failing to keep his cool, telling Aashima that Ashneer had stolen everything and there was nothing left in the bank to pay the employees. 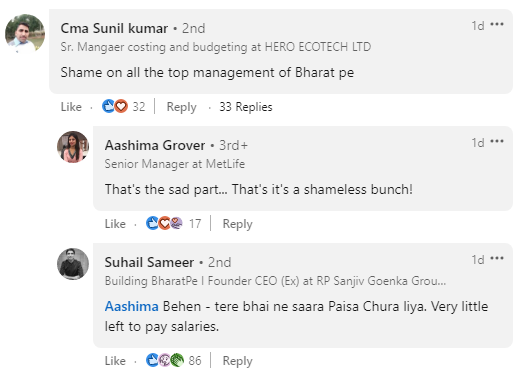 For those of us who can’t read romanised Hindi, Suhail’s comment reads, “Sister – your brother has stolen all of the money. Very little left to pay salaries.”

Aashima decided to reply in kind to these comments as well.

This kicked up a storm that no one at BharatPe could have imagined to handle.

While the tide was already very anti-BharatPe, Sameer’s comments only made things worse for them and the BharatPe team. However, he did assure Karan, saying that if his settlement is not done by Friday, he can reach him on his number.

The rest of the comments are a mix of everything, with people going as far as tagging Prime Minister Modi in the post, reminding us as to why LinkedIn is the new Facebook.

At this point, Sameer had realised that nothing good has ever, or will ever, come out of a fight in the comments section, and apologised for his comment in response to Aashima Grover.

However, this did not stop the other Grover to continue replying to comments, and she even hinted at a possible return, comparing Ashneer Grover to Steve Jobs. Well, there are only a few comparisons to be drawn here, and all of those comparisons end at how people around them perceive them to be.

Taking The Fight To The Streets

This tussle, which has since gone viral, has taken another step in completing the perfect disaster at BharatPe.

Not only this has publicised the matter so much that it will remain in the public consciousness for years, but Suhail Sameer has also made a villain out of himself for no good reason.

It should be noted that while Aashima Grover is Ashneer Grover’s sister, she is by no means related to the inner workings at BharatPe. Suhail should have realised that and refrained from ever commenting, or replying, for that matter – there is a reason a company at the scale of BharatPe hires PR agencies. However, with a single comment, the current CEO threw that out of the window.

On 29th January, the fintech unicorn appointed Alvarez and Marsal (A&M), a risk advisory firm to conduct an independent audit of the startup’s internal processes and systems shortly after cofounder Ashneer Grover took a leave of absence from the company.

Soon thereafter, BharatPe onboarded one of the Big Four accounting firms PricewaterhouseCoopers (PwC) to look into the company’s transactions. Deloitte was the statutory auditor of BharatPe and by now, it has likely been questioned on how it missed the alleged financial irregularities.

Amid the public battle, the Ministry of Corporate Affairs is reportedly looking into key parts of the operations of the fintech unicorn. According to a report by The Morning Context, BharatPe has been asked by the ministry to reveal details about its business. This comes after reports emerged that the MCA had started looking into the BharatPe saga.

The central government ministry is said to be primarily looking at how the company built its P2P lending business which is called 12% Club. The company is said to have disbursed INR 3,000 Cr ($401 Mn) in P2P loans and further, it has also extended a total credit line of INR 1,000 Cr through the buy-now-pay-later product ‘Postpe’.

Amid the investigation, employees are leaving BharatPe in droves, disillusioned by the leadership and the issues with corporate governance at the startup. The complete breakdown of things at BharatPe is indicative of a deeper problem. However, the company’s failure to create a safe culture for its employees has only worsened its woes recently.

Street fights like the one Aashima and Suhail engaged in do no one harm but BharatPe itself, who has to now put out another fire, burning hands in the process.