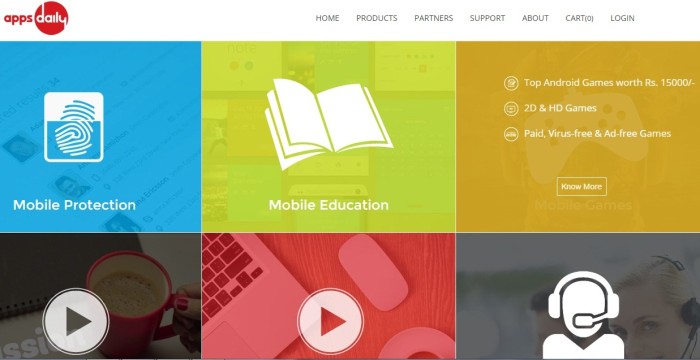 Riding on the growing smartphone market in India, startups are pivoting on the app-commerce. Smartphones which are projected to reach over 500 Mn customers in India by 2018 is going to see an app explosion soon. Professional service firm, Deloitte predicts that in 2015, about 9 Bn apps will be downloaded in India, which will be five times the number of apps downloaded in 2012 (1.56 Bn) at a CAGR of 75%.

However, AppsDaily, digital app distributor, felt that prevalent app channels and models were not customized for the Indian consumer due to which the mobile app market remains under-penetrated and under-served in India.

AppsDaily, which currently sells anti-virus and insurance services for new phones, has raised INR 100 Cr in a new round of funding led by Zodius Capital. The company which was earlier backed by Mumbai Angels will see its partial exit. Also, the round saw the participation of its existing investors Kalaari Capital, ru-Net Ventures and Qualcomm Ventures.

Eyeing the digital market space, AppsDaily has decided to help customers discover and buy mobile apps the way they buy FMCG goods. They called it FMDG – Fast Moving Digital Goods!, which could be received through retail. Unlike Google or Apple app stores, which only have a virtual presence, AppsDaily’s app store model g users a curated selection of third party apps in music, education, taxi booking and travel with whom it will work on a revenue share basis.

Arun Menon, founder & CEO, AppsDaily said, “We have leveraged the existing DNA and behaviour of the customer using infrastructure of the local mobile stores.”

Presently AppsDaily has 3 Mn customers, further targeting to expand this to 15-20 Mn in the next 12 months.

Founded in 2009, by Arun Menon and Ajay Menon, AppsDaily distributes apps through a retail network of 7,000 mobile stores across 700 cities to new smartphone users. Besides, the company has its in store demonstrators in 3,000 outlets to sell its security products, with net revenues expected to reach INR 130 Cr in 2014-15.

Zodius Capital’s Gautam Patel, who is joining the board of AppsDaily, commented on the funds raised by saying that AppsDaily provides a very important bridge to the Indian digital consumer who wants access to best-in class services but is still grappling with bandwidth availability and cost issues. “The company is in a market defining position providing mobile applications to the fast-growing India-wide smartphone customer”, he added.

The development comes at a time when India’s 937 Mn mobile users are moving from feature phones to smartphone. According to Cisco report, smartphone user base is expected to reach 651 Mn in the next four years making India largest global mobile first internet market. India’s largest etailers Flipkart and Myntra have planned to shut down their mobile websites to force users to download apps.