Will Axis Bank Succeed By Relying On FreeCharge To Boost Its Digital Payments Vertical?

Will Axis Bank Succeed By Relying On FreeCharge To Boost Its Digital Payments Vertical? 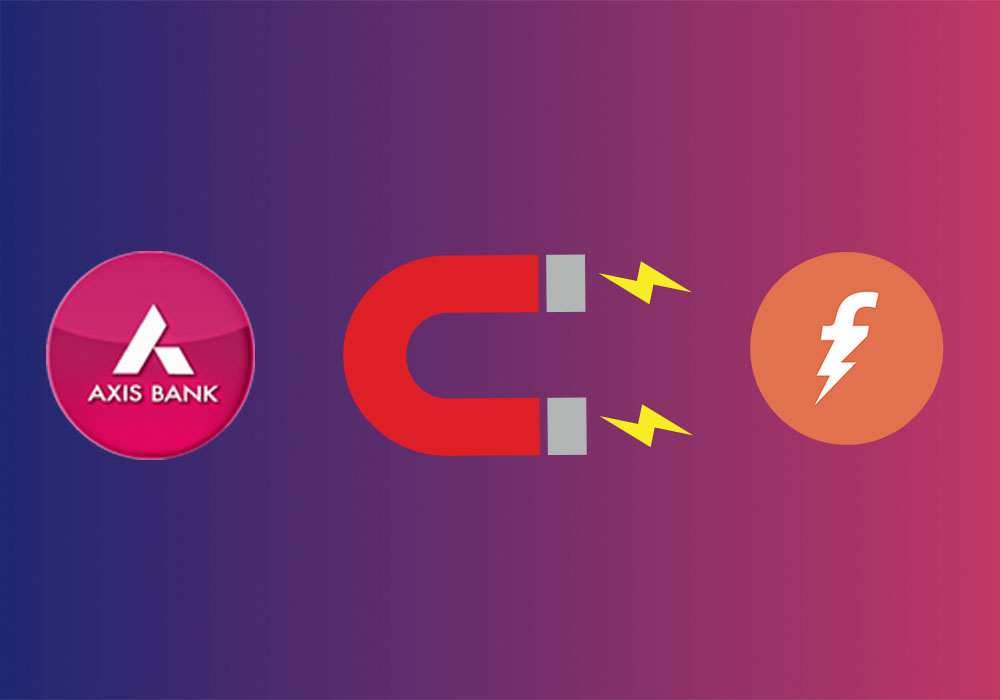 The country’s third-largest private sector lender Axis Bank has become the first bank to acquire a digital wallet startup. The company announced the acquisition of FreeCharge for $60 Mn today. The acquisition includes both Accelyst Solutions Private Limited and Freecharge Payment Technologies Private Limited, which are collectively referred to as “FreeCharge” in the digital payments space. 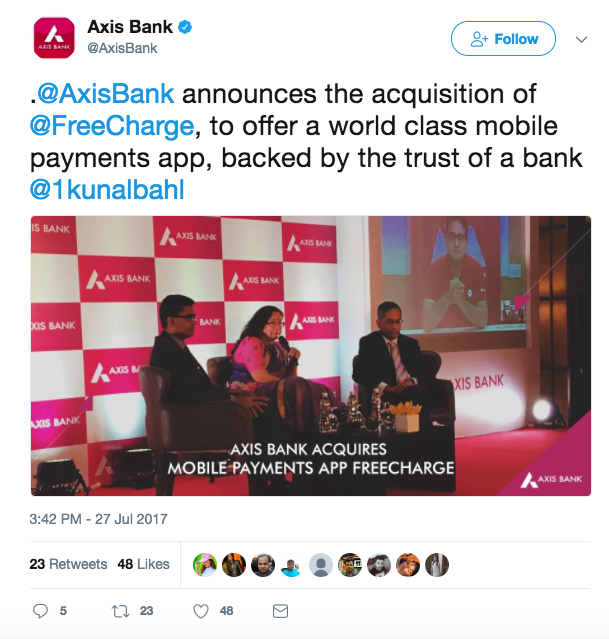 Shikha Sharma, MD and CEO of Axis Bank, “The acquisition of FreeCharge reaffirms Axis Bank’s determination to lead the journey of digitisation of financial services. We expect FreeCharge to contribute significantly in our aspiration to serve the digital native and mobile first consumers of India.”

From Paytm to MobiKwik to PayPal, all were at one point in the race to buy FreeCharge. But ultimately, it is Axis Bank that finally managed to clinch the deal. And that too, at a mere 15% of FreeCharge’s $400 Mn sale to Snapdeal in 2015.

But why exactly was Axis Bank so interested to buy FreeCharge? Because, unlike its competitors Paytm and MobiKwik, FreeCharge was unable to capitalise on the boom in payments after the demonetisation drive last year. That happened either due to lack of resources or proper direction by the management, given parent Snapdeal’s own struggles. And most important, will Axis Bank be able to succeed by relying on FreeCharge to boost its digital payments vertical?

First and foremost, FreeCharge currently has a user base of about 50 Mn customers and over 200,000 merchants which will now be accessible to Axis Bank. Secondly, the 200-member-team of FreeCharge will join Axis Bank, which will run FreeCharge as a separate entity. Thus one of the main reasons behind the acquisition is Axis Bank’s hope to leverage Freecharge’s expertise as well as its user base to strengthen its presence in the country’s burgeoning digital payments space.

This was confirmed by Axis Bank’s CFO Jairam Sridharan who stated that the acquisition will double the customer base of the bank and leapfrog its digital journey by multiple years. It will now give the bank access to high-quality technology that usually traditional companies struggle to build as compared to agile Internet startups. This is something that it has been trying to bolster by associating more with fintech startups in the last few months.

For instance, last November, in a bid to move from a ‘mobile-first’ to ‘AI-first’ platform, Axis Bank announced to launch intelligent banking chatbots in partnership with Active Intelligence Pte (Active.ai), a Singapore-based fintech platform. The initiative aimed to bring mobile banking services to its customers in the form of a conversational interface.

Prior to that in June 2016, it had also launched ‘Thought Factory’ – an innovation lab facility to accelerate innovative technology solutions for the banking sector, in partnership with Zone Startups. Under this initiative, it selected three fintech startups from the first batch of its accelerator programme whose solutions it will commercially deploy at its business units. These include Pally (an artificial intelligence stack-based chatbot for investment advisory); FintechLabs which offers lending management solutions, and Gieom which provides a cloud-based tech for operations management.

Lastly, FreeCharge’s acquisition is in line with Axis Bank’s strategy to bolster its digital ammunition, something that was also confirmed by the bank’s ED Rajiv Anand to ET Now. Rajiv stated, “Payments is core to our franchise and when we looked at the FreeCharge platform what we saw was that it had a great brand which they have been able to build in a very very short period of time. It had a very large customer base in that short period of time that they had built out in a demography which is very attractive to us which is typically what we call the millennials. It is a great platform from a technology perspective and of course a very high quality and energised team.”

He added that as the digital wallet was available at what Axis Bank thought was a reasonable price, all put together, it fit the bank’s longer term vision of making digital payments a compelling proposition to its customers.

Rajiv has a point here. Even though Axis Bank already has a digital payments app called Axis Pay which is integrated with UPI, the number of users of Axis Pay UPI app is significantly lower compared to FreeCharge, which is estimated to have 50 Mn users. This will mean that Axis Bank can make use of this user base under FreeCharge. Nearly 75% of FreeCharge’s users are under 30 years, with 85% users accessing their financial services from a mobile device, which again reinforces Axis’s ambitions to target young mobile first consumers.

The acquisition is expected to help the bank take a significant step towards digital distribution of its financial products. The FreeCharge platform provides access to agile customer-facing technology, which will help the bank to serve its existing customers better and approach new digitally native customers in an efficient manner.

Many other banks such as SBI, HDFC, ICICI, Kotak Mahindra also have made great strides in the digital payments space with their own apps as well as by collaborating with fintech startups. For instance, HDFC Bank launched the Unified Payment Interface (UPI) on peer-to-peer payments app Chillr this April. As of date, about $463.2 Mn (INR 3,000 Cr) has been transacted with HDFC bank on the Chillr app. Besides Chillr, which started working with HDFC in 2015, the bank has been working with more than 20-25 fintech startups.

Yet, the fact remains that the payments space in India is a highly competitive space. While the FreeCharge acquisition may help Axis Bank somewhat in customer acquisition, it remains to be seen if the tech advantage which the bank is hoping to leverage will enable it to vault into the same league as Paytm or MobiKwik in the digital payments space. For FreeCharge, this is a second shot to run as an independent business under Axis Bank and a chance to probably reduce a little of the wide gap between competitors.