The Art Of Failure: Faith, Customer Discovery, And Development

The Art Of Failure: Faith, Customer Discovery, And Development 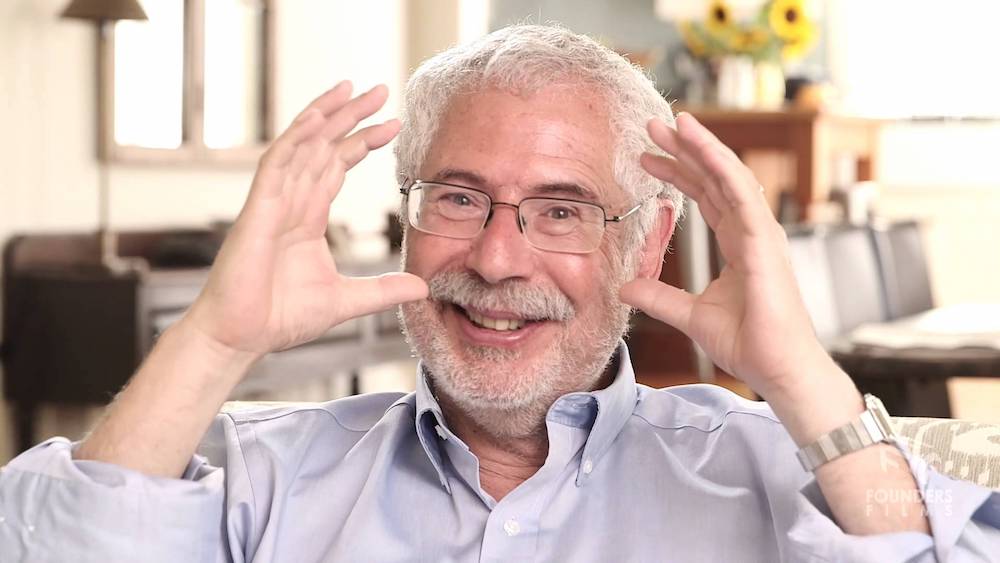 Failure, by default lures one towards negativity. However, great leaders are always adamant on finding the reasons and overcoming them. One such personality is Steve Blank.

A Silicon Valley serial-entrepreneur and academician, Steve Blank is recognised for his methodology which emphasises that startups are not smaller versions of large companies, but require their own set of processes and tools to be successful.

Blank has spent over 30 years within the high technology industry, founding or working within eight startup companies, four of which have gone public.

Retired since 1999, Blank writes and teaches about Customer Development and the Lean Startup method. He is also a prolific blogger and public speaker and has written four books: “The Four Steps to the Epiphany,” “Not All Those Who Wander Are Lost,” “The Startup Owner’s Manual” and “Holding a Cat by the Tail.”

In his lecture during the February 2011 Eli Zelkha class, at the Monterey Institute of International Studies, he enlightened the listeners on ‘The Art of Failure’.

The very first note that he began with is, “Startups fail because they confuse search with eecute.” Correlated to this is, “The startup failure is directly proportional to the founder’s passion.”

So, What’s A Startup?

He answers this in a slide below: The major distinction between a startup and a large company is that large corporations at its core execute known business models. Large companies have processes that are repeatable and can be uniformly applied across the entire organisation. They hire people, put in processes and ‘EXECUTE’.

But startups do thing differently. As Steve says,

“On Day One, you know nothing. And ultimately, you want to become Apple or IBM or Walmart.”

Startups in their early days are searching for a business model i.e. the right product-market fit. The goal is to search for unknown customers and unknown features and eventually scale to become a large company. “The processes are yet to be identified, they don’t understand who their customers are, and what they need to do to serve them. It is working to find a repeatable sales model and when it’s found, managers can be hired.”

So, Steve’s definition of startup is, “A startup is a temporary organisation used to search a scalable and repeatable business model.” 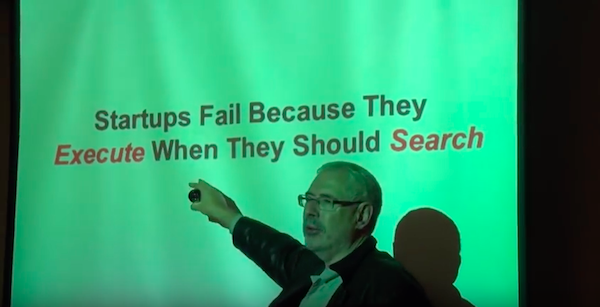 For an entrepreneur, listening is the hardest possible thing you can make him do. “Let me tell you what’s worse. Imagine you got funded by the best VC firm in Silicon Valley and you will think that your startup idea has been blessed by god. You are now believing all you need to do, the fatal mistake, is execute your plan. This is where startups go wrong.  They believe because someone said here is a check, all you need to do is hire people, and the world will explode just as per the plan.”

He further stated that the world-class entrepreneurs are spectacular in search.  These same entrepreneurs typically hate managing 10,000% companies. If you are a founder you have to wake up in the morning with a vision.  And with the passion to bring that vision to reality. No one else can do this for you.

What you really need to know is there needs to be a little voice at the back of your head. That says, so what if you are wrong. And because we are driven with passion, that voice is not natural. If your manager comes to you saying that “People say that the idea is not good,” what you will say to him?  “You are not listening. You are not explaining it properly.” And eventually you will fire him. “What I will do. I will not hire a VP of Sales. As the founder, it’s you who has to go out and do this and listen to your potential customers.”

The crux is that the founder needs to begin by building a customer development team, not sales team, or any other team. They also need to think beyond just execution.

Passion is another characterisitic of an entrepreneur. People who are working for large organisations are there to do a job, but for those who are building startups, it’s a religion. It is a faith-based enterprise on day one and a series of untested guesses.

“And what your job is to transform it into a fact as quickly as you can. Because to start up is an irrational decision, the answer is you can fail, but you do it because you are passionate, you are excited, etc. but the goal is to turn that passion and faith into fact as quickly as possible.” 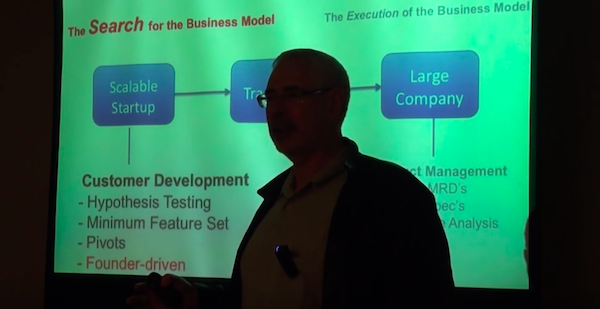 “We expect that your initial guesses are more than likely wrong. And that is ok. This is what gonna take you out of the building physically or virtually and help you start interacting with your customers as early as possible. And you are gonna test two fundamental assumptions, the assumption about the problem or the need of the customer, because when you started the company you have in mind to solve x problem for them, to provide y solution. When this gets done, now they are gonna test another assumption, if that solution is really solving their need. This cannot be done while sitting inside the office.”

One of the mistakes in thinking about this process is to take your source code, patents and share them with your customers on day one. If you are doing that, you are doing way too much talking before selling the product. “My suggestion is – behave as if we are not trying to sell anything at all. We are trying to do something that is very hard for an entrepreneur. And that’s called listening. And that calls for asking questions about what the people’s needs are v/s the solution you are trying to push.

There’s a lot more Steve Blank has to say in the video below. Check out and do let us know your views in the comments below!