The Indian Startup Ecosystem Turns The Heat Up This April 1, Check It Out 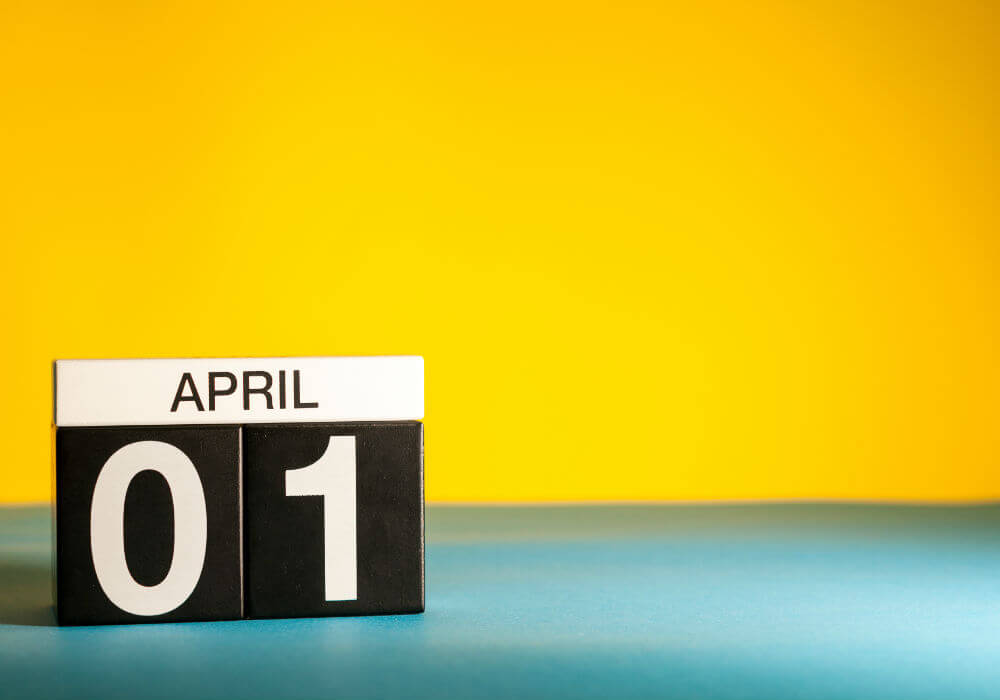 While Silicon Valley’s tech companies have a long-standing history of making elaborately planned and detailed out announcements of out of the world product launches around April Fool’s Day, this year their Indian counterparts aren’t that far behind. While most of these turn out to be pranks, some of them turn out to be the real deal many a time.

As the Indian companies kickstart new financial year on April 1, 2018, a series of out of the blue announcements have kept the media corridors buzzing for almost the entire past week.

This included many interesting prank announcements such as OYO announcing its own ICO, OYO Smart Coin; Urban Ladder launching ‘The Urban Ladder’, a high chair that comes with built-in speakers, a thermal mug holder, and a charging station, amongst others.

Inc42 decided to dig up further and found some interesting stories on the grapevine. Let us know what you think 😉

Majorly popular as a bike-taxi service in South East Asian countries like Indonesia, Malaysia, Thailand, and after acquiring a number of the Indian startups as well as setting up its research facility in Bengaluru, Go-Jek finally made its entry into the country with a new product launch – KYS.

Built on the lines of KYC (Know Your Customer), KYS is focussed on the consumer segment and stands for Know Your Self. 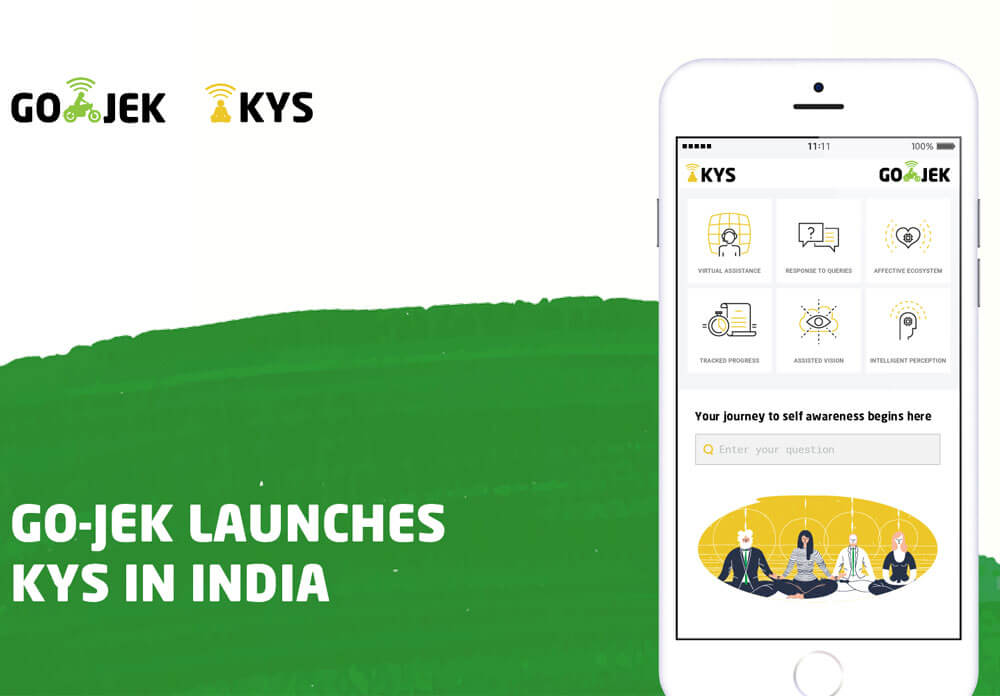 KYS can be used to answer the ancient question often asked by sages, “Who am I?”. By solving this existential crisis, GO-JEK has got the first mover-advantage in bleeding-edge technology that will spill over to the core of automation, artificial intelligence and eventually, blockchain. And cryptocurrency. And Ethereum. And Bitcoin.

KYS was developed by GO-JEK Tech’s 200 engineers. The revolutionary product will NOT require any biometric data. KYS will be seamlessly integrated into the one-stop solution GO-JEK app that will authenticate its plethora of products and services.

“We will be adding one more stacked full developer to our leaner than usual lean engineering team to bring this product to the mass market. Our agile approach to engineering along with world-changing growth hacking will broaden our impact and this will be a billion dollar industry with trillions in the taking for GO-JEK. For all those companies insisting on KYCs and folks who love corporate jargon, we’re sorry. You’ve just been disrupted. Again. And bitcoin,” shared a Go-Jek spokesperson in a media statement.

Zomato-Swiggy To Merge; Deal To Be Announced Next Week

The Indian foodtech duopoly, Zomato and Swiggy, are set to merge after months of covert negotiations which concluded early this week, as per rumours heard by Inc42. This will be one the most prolific deals ever seen in the Indian startup industry. Reports of a merger first came out in November with prior discussions between the company officials taking place in the days following last Diwali. But those talks hit a roadblock over the structure of the deal and the valuation, with Zomato’s offer valuing Swiggy at $225 Mn.

The companies hadn’t apparently abandoned the idea but were focussing on raising their own set of funds while backchannel talks continued to take place with the blessing of Ant Financial and Softbank. Softbank remains eager to get a larger chunk of the Indian foodtech space and is looking to invest in the combined entity.

The deal terms are currently being worked out, but a consensus has been reached on the overall valuation, which was not disclosed, and the agreement may be announced as early as next week.

This deal will value the combined entity at a valuation north of $3.2 Bn, making it one of the most valuable food tech companies in the world. Also, it will bring together investors such as Naspers, Softbank, Meituan-Dianping and Ant Financial, giving the combined entity a unique positioning amidst its global rivals such as UberEats.

Gurugram-based coworking startup myHQ has launched shared workstations in Delhi Metro. One can reserve an entire coach in the Delhi metro with the best of work amenities including free wi-fi, ample charging points, free office stationery,laptop-friendly desks and free coffee.

According to the company, an average commuter in Delhi spends 10 hours a week in just commuting from one place to another! myHQ aims to make these unproductive hours count, particularly for the startup fraternity.

Using the myHQ app, users can reserve a seat on the coworking coach by entering the stations you’d be boarding from and getting off at. Just scan the QR code at the entry, hop on to the coworking coach, connect to the Wi-Fi and enjoy a seamless work experience.

The myHQ coach is going live from April 16. The first 500 startup entrepreneurs can avail this opportunity to work seamlessly on the go. 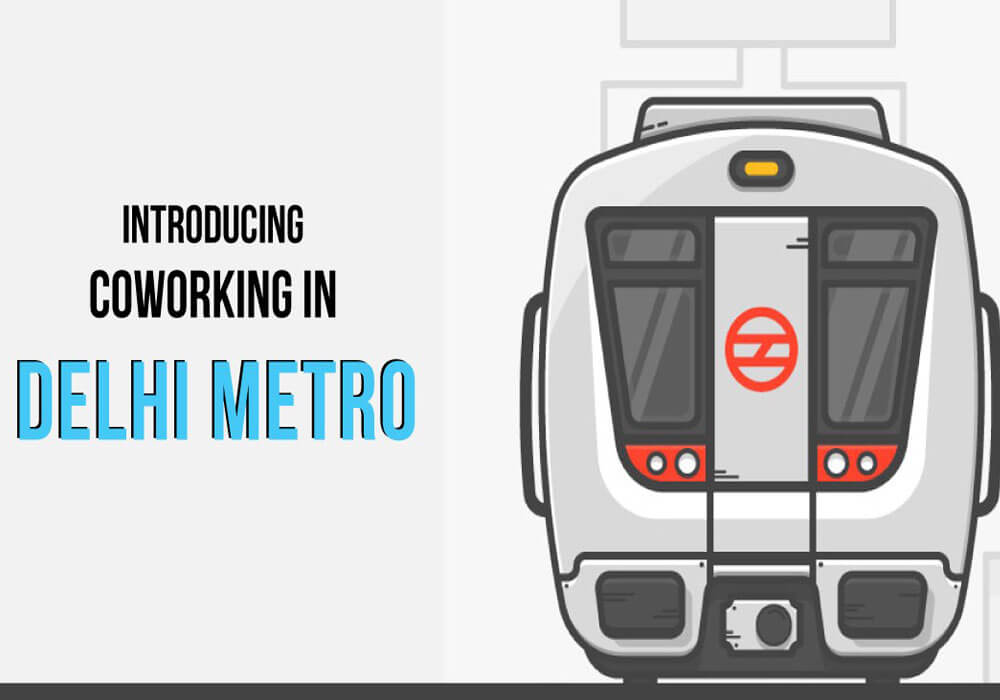 Alibaba backed Paytm Mall has agreed to merge with Flipkart, a move that puts a renewed focus on countering Amazon’s increasing dominance in the Indian market. Inc42 spoke with a few people who shared this insider grapevine going on in both the companies but have asked not to be named.

Although details of the agreement were not immediately clear, what is clear is that talks have been ongoing for a while now and that the deal comes after extended back and forth between the company executives. 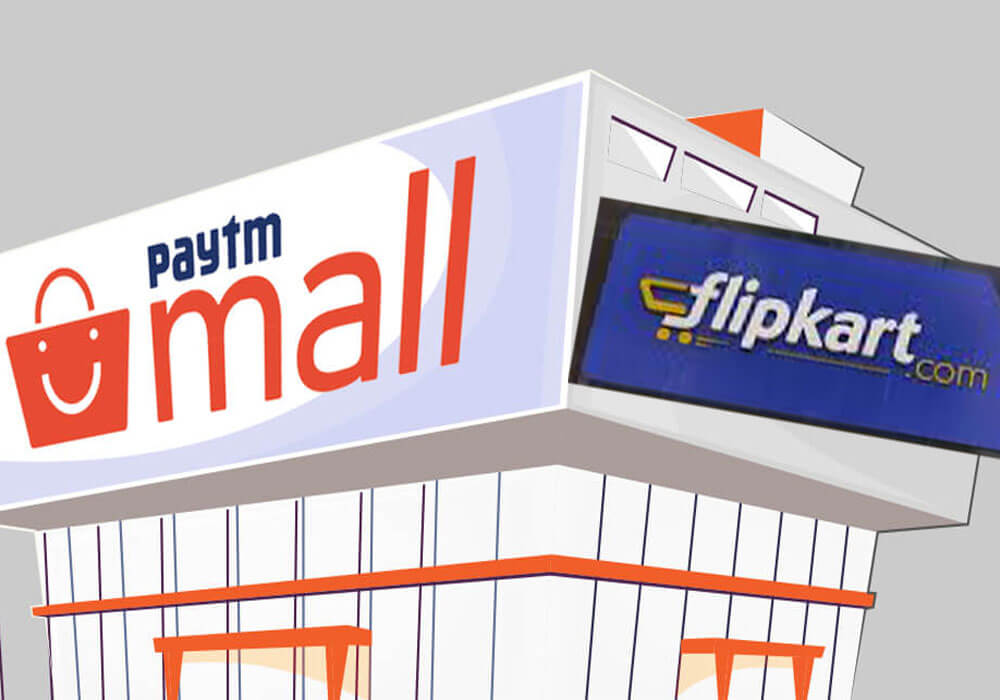 Softbank, which has invested in both Alibaba and Flipkart, is known to be wary of the rising Amazon tide and has looked to address that by infusing $2.5 Bn into Flipkart in August while  the firm has already invested $1.4 Bn in Paytm. Paytm Mall had last raised $200 Mn from Alibaba, Ant Financial and SAIF Partners in March 2017.

Paytm Mall is trying to get offline sellers to use their platform and it can try to synergise this aspect with that of Flipkart’s superior logistics, strong online presence and great brand recognition. Flipkart on the other hand has been looking to partner with brands to pursue offline sales and Alibaba’s experience in this field, for example in China where it has mastered the formula of offline brand partnerships, can prove crucial. Paytm Mall, which is a division of Paytm, has had some hiccups on the logistics side and quality of products so far, which it can now look to resolve.

The sources shared with Inc42 that on the urging of Softbank, both the companies held talks over a period of three to four months and great care was taken so as not to leak any details of the development to the media. Softbank had earlier pushed for the merger of Snapdeal with Flipkart which never materialised.

Meanwhile, Amazon has been busy in building its product stack in India. Also, Amazon India is flush with cash with the company already having committed to spending $5 Bn in India whereas Flipkart has burnt through nearly half of the $6.1 Bn funding it raised from investors over the last decade, since it started operations in 2007.

The pieces on the chess board are moving and Indian consumers may very well end up being the King/Queen.

Say Goodbye To Your Traffic Woes With Droom FLY

Packed roads, vehicles stuck bumper-to-bumper for kilometres on end, and traffic moving at a snail’s pace are so common now that people in India often wish their vehicles could sprout wings and fly. But while flying cars might be still be a long way from becoming a reality anytime soon, Bengaluru-based online automobile transactional marketplace, Droom, has announced the imminent launch of Droom FLY, the most advanced pair of hover shoes in the country, to help Indians beat their traffic blues – by literally soaring over it!

As shared by the Droom team with Inc42, these innovative hover shoes are capable of achieving a top speed of 80 km/h and can fly up to an altitude of 1,000 feet and possess features like self-balancing, soft cushioning, fast-charging, and a battery life of up to five hours.

As Sandeep Aggarwal, Founder & CEO – Droom, shared, the company has already launched campaign promotions for Droom FLY on Facebook and Twitter and has received an encouraging response for the pre-bookings. It is offering Droom FLY at an introductory price of INR 9,999, with an additional early bird discount of 25% for the first 100 customers. With the sale set to go live from April 1, the offer is certainly worth grabbing. 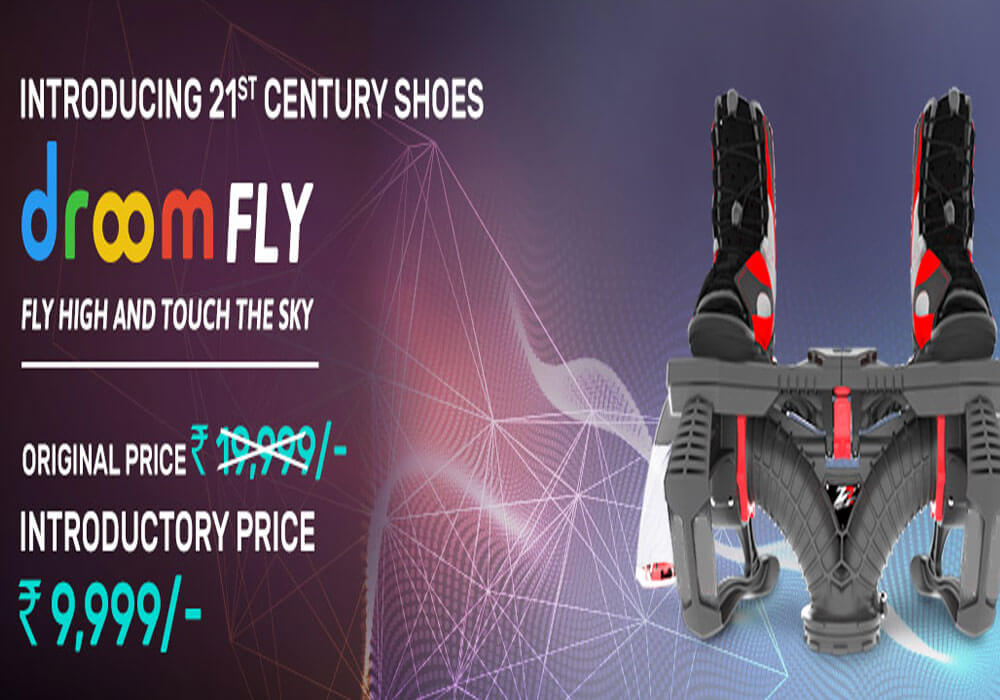 In what can be said as a significant diversification from its cab-hailing services, Ola has announced its very own news channel, ONN – Ola News Network.

The company posted a teaser video on social media, which showed a multiplex of screens, and a few weird news announcements. The ONN logo is all the more exciting and has ‘Coming Soon’ written underneath.

The company also announced its tag-line, “With ONN, You Will Get Hyperlocal New – News That You Can Use”

Further details on the development are yet to be disclosed.

Ixigo Launches Ixigo Kawach- A Lock That Gives A Shock

Ixigo, one of the leading travel apps in the Indian ecosystem, has brought something very unique and useful for the mass population. Every year, thousands of bags, suitcases get stolen from public places, particularly railway stations.

To combat this, ixigo has launched ‘ixigo kawach’– a unique lock which gives the thieve electric shocks. The lock creates an electric shield over the suitcase/ bag which gives a shock as it moves more than 5 meters away from the owner.

It also has a sound alarm, which indicates the thieve that he is the culprit. Also, it gets unlocked only with the owner’s fingerprint. So in case you are vying for a smart locking solution on the go, ixigo kawach is something you can look for.

April Fools' Prank Of The Year ?

For a while now, hyperlocal has been stealing all the swag in the delivery ecosystem for giving instant deliveries from the nearby stores. However, the Bengaluru-based logistics management startup Locus is aiming to bring another revolution in the delivery segment, being on its mission to deliver end-to-end automation from point of dispatch till the order reaches the end customer.

Locus has now introduced Nanolocal, to take a step further and solve the big house woes and the hunger pangs of the Indian millennials. As mentioned on the company website, “Delivering from your Kitchen to Bedroom, in 60 seconds. Unlike Batman, it is the Hero you deserve, but don’t need.”

One can now register his fridge, kitchen and munchies drawer with NanoDrone and can summon the nano drone with the Locus app or just whistle with Alexa. 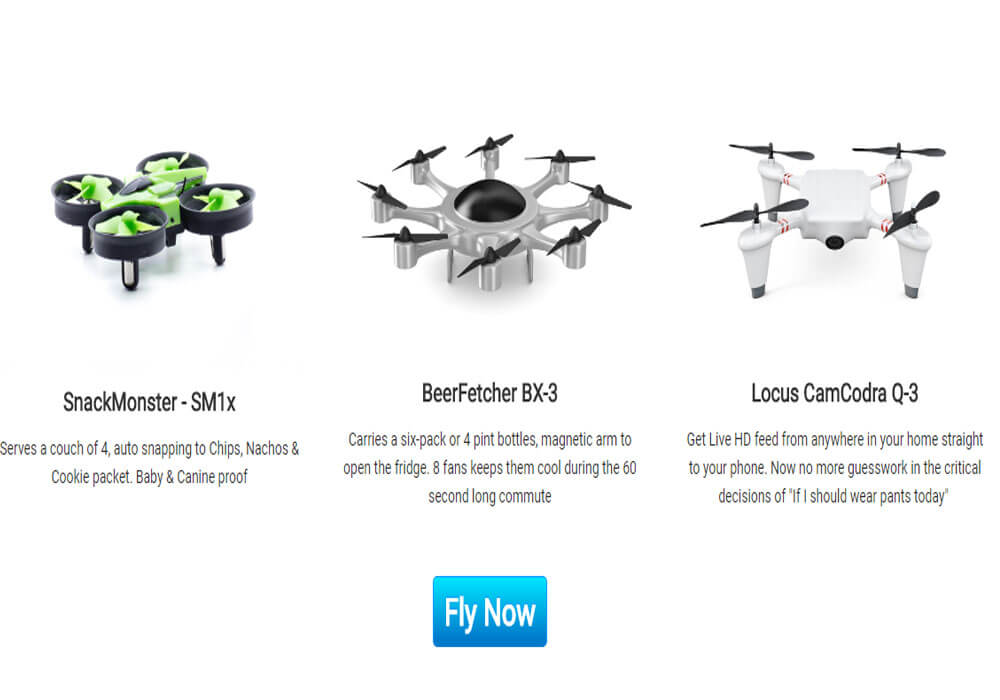 In case it wasn’t obvious already, these were some great prank campaigns launched by Indian Startups (as well as Inc42 team) around April Fool’s Day. There were many more along the lines of blockchain and ICO’s (1, 2). We, however, refrained from covering those as the world of ICO’s still feels like a big prank in the making and you never know if companies are actually serious about it 😉