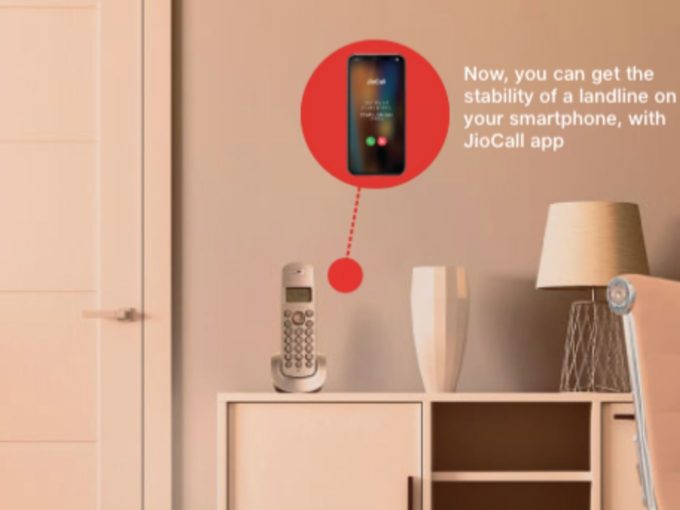 Four years after disrupting the telecom industry with the launch of Jio, Reliance is now entering the homes of Indians with its digital broadband service, Jio Fiber. And Jio Fiber is more than just a broadband service as Jio has released a whole host of digital services to go with it.

In one such attempt, Jio Fiber has launched a new service which enables subscribers to answer landline calls using their smartphones. According to a Livemint report, a user can convert their fixed-line connection to a smart line by using a smartphone to make both video and audio calls.

The companion JioCall smartphone app, earlier known as Jio4Gvoice, lets users enter details of the fixed-line number they want to register on the app. Once a user has connected the smartphone to a landline via JioCall, they can then answer all landline calls using the smartphone.

While unique, the feature is only limited to users who either have a Jio SIM card or are connected on Jio Fiber or JioFi connection.

Moreover, the new feature is not limited to connecting landlines, but it also lets users call on the intercom connection of their gated communities or apartment complexes. For this, the complex or campus needs to be on the Jio network.

Launched on September 5, 2019, Jio Fiber is trying to bring all digital services to home under one name. Currently, the plans for Jio Fiber starts at INR 699 and go up to INR 8,499 per month along with a free landline connection.

In late October, Mukesh Ambani-led Reliance Industries Ltd set up a new digital services company to act as an umbrella platform for all the Reliance-owned digital businesses including Reliance Jio, MyJio, JioTV, JioCinema, JioNews and JioSaavn. The new company will fit between the parent company and the subsidiary Reliance Jio.