With Open becoming a unicorn, India now has 100 startups in the coveted club

After Games24x7 became a unicorn in March this year, everyone was waiting with bated breath to see which Indian startup would become the 100th unicorn. After more than a month, the Indian startup ecosystem achieved a major milestone, with  Bengaluru-based neobanking startup Open becoming the 100th entrant into the unicorn club after raising $50 Mn in a funding round led by IIFL.

The moment was long in the making. The Indian startup ecosystem has come a long way over the last decade or so. The unicorn journey began in 2011 when InMobi became the first startup of the coveted club. Ecommerce giant Flipkart followed soon, emerging as the second unicorn in the country. The aftermath saw a flurry of unicorns such as Mu Sigma, Ola and other startups attaining a $1 Bn valuation.

After a couple of steady years, 2021 turned out to be a landmark year for Indian startups. Investors went ballistic as startups innovated and wooed them with their top-of-the-line solutions. The result was 42 startups turned unicorns in 2021. Another two listed ones – MapmyIndia and EaseMyTrip – also entered the coveted club.

We at Inc42 have been tracking the country’s startup landscape for the past couple of years. As the Indian startup ecosystem celebrates the historic landmark of having 100 unicorns, we present the ‘Unicorns Of India: Decoding India’s 100 Unicorns Report 2022’ which tracks the journey and the coming of age of this ecosystem.

Speaking at the launch of “Unicorns Of India” report, Minister of Information and Broadcasting, Anurag Thakur said, “It’s a moment of pride for India’s startup economy. The startup ecosystem has achieved a major milestone of hitting a century of unicorns in India. These #100unicorns have positioned India among the world’s fastest-growing and top three startup hubs that are leapfrogging in the innovation space. Today, the ecosystem is identifying and nurturing talent, creating new jobs and showcasing the true potential of India’s aspirational youth.”

Is 3-Month Extension Sufficient For The Payment Ecosystem To Prepare For Card To...

Influencer Marketing ROI: How D2C Brands Can Get The Most Out Of It

“The vision of PM Narendra Modi has played a major role in helping India achieve this milestone through various digitisation initiatives like Startup India and Digital India which have made this milestone possible. Indian startups, backed by our government’s industry-friendly policies, are set to take a quantum leap and lead the world in the times ahead,” Minister of Information and Broadcasting, Anurag Thakur added.

According to the Inc42 Unicorn Tracker, India has the third-highest number of unicorns in the world and is just behind the US and China. These 100 unicorns have collectively raised over $90 Bn and have a combined valuation of about $333 Bn.

Echoing the sentiment, TV Mohandas Pai, chairman at Aarin Capital Partners, said, “It’s a great day for India when we reach the high aspirational target of 100 unicorns. By December 2025 we hope to have 250 unicorns in India.” 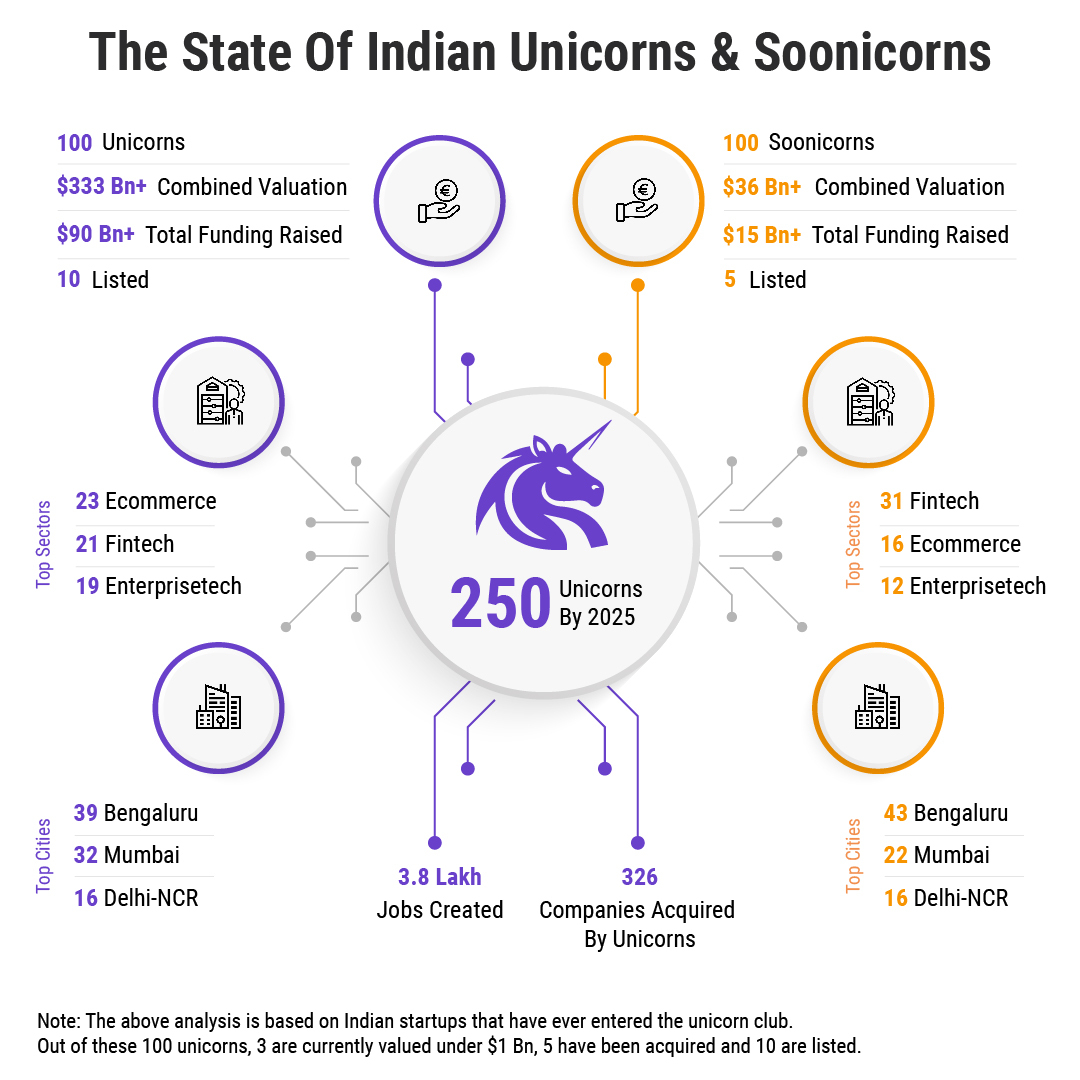 While Bengaluru continues to enjoy its dominance as the startup hub of the country, accounting for 39 unicorns,  Delhi-NCR is in the second spot with 32 unicorn startups. In terms of sectors, ecommerce contributed the most number of unicorns to the Indian startup ecosystem at 23.

The Unicorns Of India report also shines a light on prospective unicorns, colloquially called Soonicorns. Inc42 has identified 100 startups which have the potential to enter the unicorn club by 2025. The report decodes the segments, cities and more to understand which startups are likely to contribute to India’s next wave of unicorns.